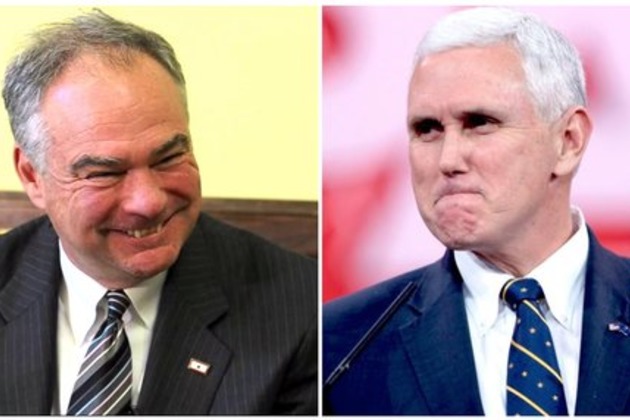 • The vice presidential nominees will debate at the Longwood University in Farmville, Virginia

WASHINGTON, U.S. – In what will be the only scheduled one-on-one debate between the vice presidential nominees for the current U.S. Presidential Elections – GOP VP nominee, Mike Pence is all set to go face-to-face with his Democratic counterpart Tim Kaine.

Even though the focus of the debate would remain on the Presidential nominees, Donald Trump and Hillary Clinton, the debate is dubbed to bring certain core issues facing the nation and both the nominees’ campaigns to the fore.

Experts have said that Mike Pence enters the debate on shaky ground on Tuesday night as Donald Trump suffers one of the worst weeks of his campaign. On the other hand, Tim Kaine is likely to have been advised to drive focus to Trump and his recent controversial moments.

However, with neither of the candidates enjoying a bigger national profile than the other – this would also be an opportunity for them to put forward winning ideas that could transform their individual party campaigns.

In the run-up to the debate being held at Longwood University in Farmville, Virginia, both sides have revealed parts of what they intend to focus on through the 90 minutes.

The Republican National Committee released a video on Monday targeting Kaine for defending two killers when he was an attorney. Reports compared the incident to the infamous Willie Horton ad released in 1988 targetted Democratic nominee and Massachusetts governor Michael Dukakis over convicted murderer Horton committing violent crimes while on furlough from his life sentence, but was criticised for being racially charged.

Trump campaign further tried to focus on the money Clinton made while delivering speeches after she served as a senator and secretary of State.

Clinton’s side, however, painted Pence, in the same frame as Trump, when it came to women’s issues.

This, after Pence lost a ruling by the 7th U.S. Circuit Court of Appeals on Monday, after a lower court’s opinion was upheld stating that Pence can’t block aid to Syrian refugees resettling in Indiana.

Speaking at a rally in Virginia on Monday, Pence, who is expected to remain on the defensive in the debate said, “Hillary’s record on foreign affairs alone could literally take up the entire 90 minutes and it wouldn’t be pretty. I kind of hope we get to talk about our records as well because they’re just a little bit different. When Tim Kaine was governor, he actually tried to raise taxes by $4 billion in four years.”

Meanwhile, Kaine said after attending Mass on Sunday in Richmond, “It’s intense, but I’m calm. Things work out the way they are supposed to.”

Flashing her trademark thumbs-up sign, Clinton on Tuesday said that she thought Kaine would have a great debate performance, while Trump tweeted, “I will be watching the great Governor Mike Pence and live tweeting the VP debate tonight starting at 8:30pm est! Enjoy!”

Above all, Pence, who has earned the media tag of being Trump’s “explainer in chief” will have to ensure he displays that he can keep his cool, being second in command to an impulsive Trump – while Kaine would have to prove that he’s capable of stepping into the top slot if needed.