Nicola Sturgeon demanded the whole of the UK should stay in the EU’s single market and threatened a second independence referendum if Scotland is forced out.

In a lecture on what she wants Brexit to look like, the First Minister published a complicated series of proposals to protect Scotland’s place in Europe.

She admitted her extensive proposals go further than looking after Scotland’s interests and boldly pronounced that her ideas for Brexit will ‘unify the country around a clear plan’.

Ms Sturgeon outlined three Brexit options in the paper – Scotland’s Place in Europe – which she said represented a ‘significant compromise’ on her initial post-referendum demand for full independence.

But she included a threat to hold a second independence referendum if her demand to keep Scotland in the single market were rejected by the Government or the 27 other EU member states.

She said her preferred option for Brexit would see the whole of the UK remain in the European single market and the customs union.

But that would mean Britain continuing to sign up to the EU’s freedom of movement rules, a scenario that has been ruled out by Theresa May.

Nicola Sturgeon, pictured in Edinburgh today, delivered a lecture on what she wants Brexit to look like today as she demanded the whole of the UK to stay in Europe’s single market

Ms Sturgeon said regardless of the type of deal struck with Brussels, Scotland should be handed a string of new powers from Westminster.

She demanded powers returned from the EU should go directly to the Scottish Government, including jurisdiction over fishing, the environment, justice and agriculture.

The First Minister also called for powers over immigration, employment law and social protection to be devolved to Edinburgh.

Ms Sturgeon argued that under this option free movement of goods, services and people would continue across the UK, even though Scotland would be in the single market and the rest of the UK would be outside.

Under this option she argues Britain  should stay in the customs union, which would allow goods to move between Scotland and the rest of the UK without customs controls.

‘There will of course be disadvantages to Scottish businesses if we are not in the customs union – although those disadvantages would be minimised if Scotland remains in the single market. 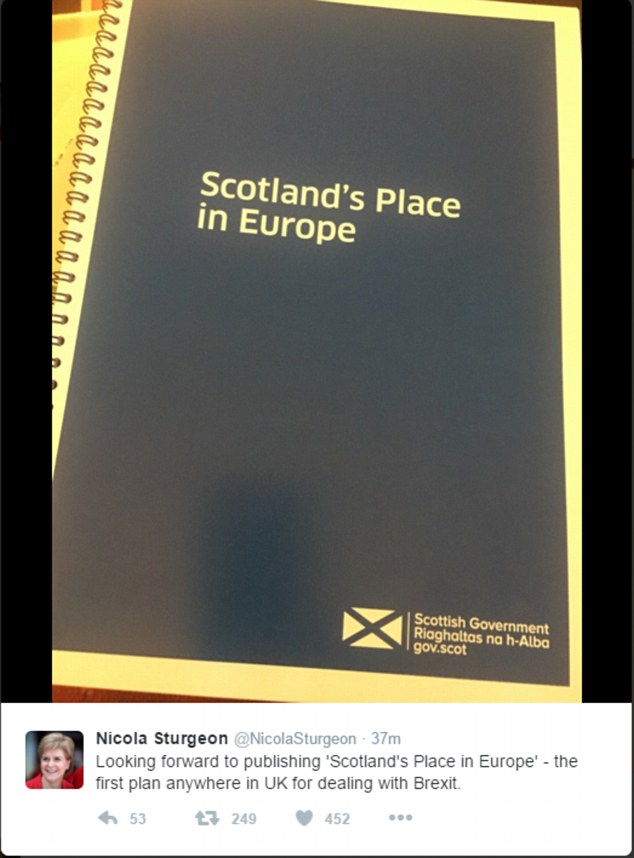 She added: ‘There will be those who say a differentiated option for Scotland such as the one we propose would be too difficult to achieve – and as I have said, the paper does not underestimate the challenges.’

Ms Sturgeon also called for a substantial transfer of new powers to Holyrood after the country leaves the EU.

Launching the paper at Bute House in Edinburgh, Ms Sturgeon said: ‘I hope and expect that the UK Government in considering these proposals will demonstrate the same flexibility and willingness to compromise.’

The Scottish Government has proposed the UK as a whole should stay in the single market by remaining ‘a party to the European Economic Area Agreement’ and staying in the customs union.

Ms Sturgeon said: ‘I accept that there is a mandate in England and Wales to take the UK out of the EU.

‘However, I do not accept that there is a mandate to take any part of the UK out of the single market.

‘It would make no economic sense whatsoever for the UK to leave the single market. It would be entirely democratically justifiable for the UK to remain within it.

‘So, the Scottish Government will continue to argue – and build common cause with others of like mind – for continued UK membership of the single market.

‘However, I reluctantly accept that as things stand – given the rhetoric of the Conservative government – that seems an unlikely outcome.’ 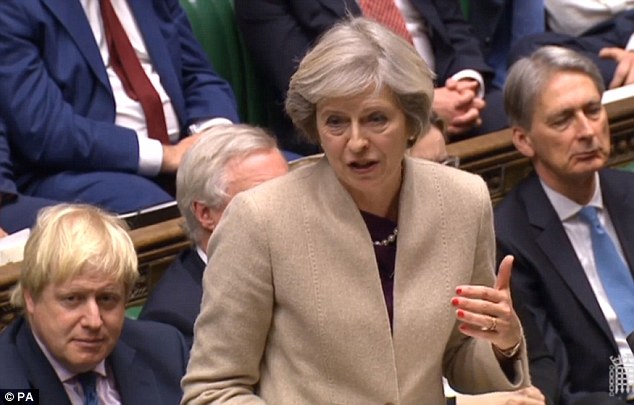 Nicola Sturgeon wants the whole of the UK to stay in the single market, which would mean Britain continuing to sign up to the EU’s freedom of movement rules, a scenario that has been ruled out by Theresa May, pictured in the Commons yesterday

The ‘second strand’ of the paper proposes ways in which Scotland could stay in the single market – through European Free Trade Association (EFTA) and the European Economic Area (EEA) – even if the rest of the UK chooses to leave.

Ms Sturgeon insisted this option does not prioritise membership of the EU single market over continued free trade across the UK. It would safeguard both.’

‘Talk of a hard border for Scotland has always rung hollow from a UK Government that says no such hard border will be required between a post-Brexit UK and the Republic of Ireland, a continuing member of the EU,’ she said.

Responding to Ms Sturgeon’s proposals, a spokesman for the Prime Minister said: ‘The Government is committed to getting a deal on exiting the European Union that works for all parts of the UK, that includes Scotland, and works for the UK as a whole.

‘The best way we think for that to be achieved is for the devolved administrations to work together.’

Downing Street said the Government welcomed the paper and would ‘carefully consider’ its contents.

Asked about the threat of a second independence referendum, the spokesman said: ‘The question is not could there be a second a referendum but should there be.

‘We do not think there should be a second referendum.’ He said Scotland was a ‘success’ as the ‘most devolved nation in the world’.