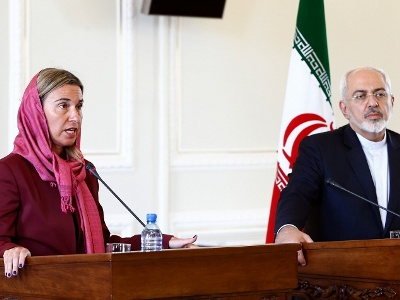 Europe is interested in trade and economic and banking cooperation with Iran , the head of EU diplomacy Federica Mogherini  said at the meeting with Iranian Foreign Minister Mohammad Javad Zarif.

During the meeting in Tehran the sides discussed issues of multilateral cooperation, including peaceful nuclear energy and power. According to the statement  of Mogherini and Zarif, the security issues in the Middle East and the matters of refugees were separate topics of discussion.

Iranian Foreign Minister Mohammad Javad Zarif said at the press conference that the US government should not interfere with cooperation of the European banks with Iran. Iran will continue to exert pressure upon the US, while the US government is preventing banking cooperation between Iran and other countries.

Mogerini and Zarif adopted a joint statement which said that the European Union is ready to give support to Iran on the way of membership in the World Trade Organization (WTO).