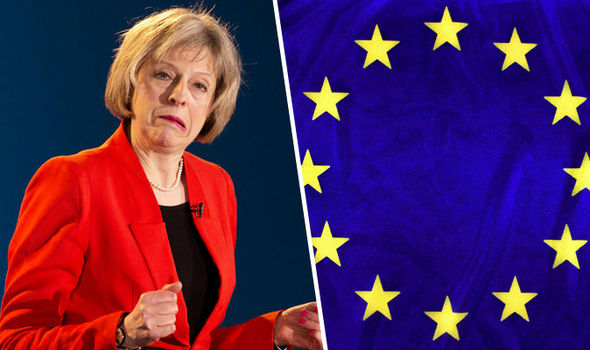 The party grandees have urged the Prime Minister to get Britain out of the bloc as soon as possible before her speech to the Tory conference on Sunday.

Article 50 of the Lisbon treaty, the mechanism in place that allows nations to sever ties with Brussels, sets out a two-year time frame for leaving.

But the group of outspoken former Conservative ministers, led by John Redwood, believes Britain’s deals can be completed over a much shorter period.

Mr Redwood warned Number 10 not to allow tensions between Britain and the EU’s remaining member states get in the way of fulfilling June’s referendum result.

Setting out the group’s “Brexit Blueprint” he said: “It is in both sides’ interest to reach an earlier agreement to reduce business uncertainty.

“If there is a breakdown or no likelihood of agreement, then the UK should withdraw and after the two-year period the UK will be formally out. Trade will revert to World Trade Organisation rules.”

The Blueprint was put together by Mr Redwood along with Iain Duncan Smith, Owen Paterson, Peter Lilley and Sir William Cash at a private meeting in September.

They called on the government to be able to “scrap aspects of EU law not considered in the UK’s interests”.

But the group will be worried their plans could be ignored after the Prime Minister revealed she is wiling to delay Brexit in order to “get the deal right”.

She said: “We need to ensure we’re getting the right deal for Britain and that means not necessarily the quickest deal.

“So we’re taking time to prepare before we formally start the negotiations – what’s called this triggering of Article 50.

“We’re going to make a success of this. There are opportunities for us when we leave the EU but we need to ensure we’re taking our time to get the deal right.”