Will the TTIP Really Be Abandoned? Can the US Afford to Lose It? 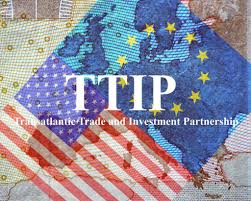 German Vice Chancellor and Minister for Economic Affairs Sigmar Gabriel said publicly on Aug. 28 that negotiations between the European Union and America over the Transatlantic Trade and Investment Partnership “have de facto failed.” He stated that in the midst of these marathon negotiations, there has basically been no progress on any major points of the agreement. “We…must not bow to American demands,” Gabriel said.

The TTIP and the Trans-Pacific Partnership are the two main strategies in Obama’s global free trade system. The negotiations for the TPP have already been completed, but the trade agreement has encountered some difficulty obtaining ratification in Congress and it appears that this opposition is more than just political posturing. If the TTIP negotiations are seriously blocked, the stalemate will affect the amount of faith Asian-Pacific people have in the TPP, thus making Obama’s big push for this strategic development anything but reassuring.

The structure of both the TTIP and TPP is extremely complicated, but put simply, their agreements make the U.S. the center of the so-called high-standard free trade system. Even though they are economic negotiations, they also bleed into American political intentions, especially the TPP. Obama has stated publicly many times that if the U.S. does not take an active role in setting the rules for global trade, China will. Furthermore, since China became a member of the World Trade Organization and has been reaping the benefits of membership, the U.S. is now seen as needing to go back to square one. The U.K.’s Financial Times has written that Washington wishes it could turn back the clock to the year 2001, before China joined the WTO.

However, the real situation is a lot more complicated than this simple explanation. The most important aspect of the situation is that America’s superior strength is no longer overwhelming. It is very difficult for the U.S. to carry out the tactic of being generous and liberal while at the same time being strategically selfish. In the middle of the marathon negotiations that it launched, the U.S. has become the stingiest party. Consequently, it now faces the general feeling of falling apart.

It’s definitely not that Congress is more visionary than Obama’s representatives at the negotiations. Throughout the process of negotiating these two big partnerships, the behavior of Congress has been much like the character Shylock (the main antagonist in Shakespeare’s play “The Merchant of Venice”) who is not willing to suffer the slightest loss.

All parties to the negotiations from the Asia-Pacific region are either political yes-men allies of the U.S. or countries that are more vulnerable when it comes to trade. Even though these countries vie for advantages over America, it is relatively easy for them to be broken down, more often than not being won over by Washington’s small economic favors. But Europe is very different. In their hearts, economic giants and political leaders like Germany and France are equal to the United States. They even believe their food and drug standards are higher than America’s and that their laws are more robust. These countries are uneasy about potentially being forced to follow the bad example set by the United States.

There are only a few months left in Obama’s term and the hope that Congress will pass the TPP within this period is already very uncertain. If there isn’t a breakthrough in the TTIP negotiations soon, the danger of the parties walking away from the table will become extremely realistic.

In that situation, it wouldn’t just be Obama who loses face. If both of these big agreements fail, it would inevitably sway the way the world recognizes America’s economic clout. This would be seen by the entire world order as marking an important deterioration in America’s power to speak out on the global stage. Many people will wonder, “If, after sparing no effort, the U.S. wasn’t able to conclude one trade agreement, in the future, what will it be able to accomplish?”

Therefore, there are still a few variables pertaining to the attitude Congress may ultimately take toward the TPP. Hillary Clinton and Donald Trump both claim they oppose it, but if either one of them gets the chance to occupy the White House, the actions either one of them might take are not especially certain.

If there is no TTIP, the TPP will then become a solitary wing flapping with all its strength, struggling to support America as it tries to take off once again. Its strategic worth will then be hugely less valuable than originally anticipated. Consequently, Gabriel’s comments on Aug. 28 are a considerably heavy blow; Washington most certainly feels the pain.

Apparently, the U.S. needs to solidly rouse its own economy. After all, the TPP and TTIP can be considered “structural adjustments.” No matter how it adjusts, the U.S. is bound to put forth a great deal of its own effort. The U.S. controls the world from finance to a great deal of the internet systems and also has the greatest military strength. Is it really willing to work this hard just to make some money? I’m afraid this is where the core of the problem truly rests.