Why Trade Is Hated 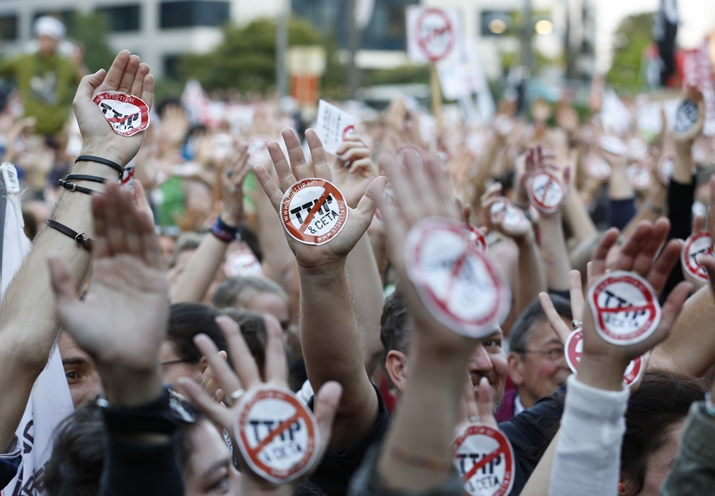 Protestors demonstrate against multilateral trade deals including the Transatlantic Trade and Investment Partnership and the Comprehensive Economic and Trade Agreement in Brussels, Belgium, on September 20 (XINHUA)

In his first policy announcement after election, U.S. President-elect Donald Trump claimed on November 21 that he would withdraw the United States from the 12-nation Trans-Pacific Partnership (TPP) free trade agreement on his inaugural day in office.

Meanwhile, on the other side of the Atlantic, the fate of the Transatlantic Trade and Investment Partnership (TTIP) deal, which is being negotiated between the United States and the EU, is also unsure. European Commissioner for Trade Anna Cecilia Malmstrom has said, “TTIP will probably be in the freezer for quite some time, and [as for] what will happen when it is defrosted, I think we will need to wait and see.”

It is very possible that both the TPP and TTIP will end in failure. Nevertheless, there is far more to worry about the global multilateral trading system than that. During his presidential campaign, Trump even claimed that he would reconsider the United States’ involvement in a number of free trade agreements and threatened to pull out of the World Trade Organization (WTO).

Trump is not the only person against the multilateral trading system currently in operation. After all, there have always been voices railing against trade-related arrangements, and they’re getting louder all the time. It therefore comes as no surprise that the WTO, TPP and TTIP’s opponents have vented their contempt, hoping to knock them down along with globalization.

However, when considering the merit of those mechanisms and the arguments of their opponents, it is clear that the reasons behind some people’s resentment of the multilateral trading system are complicated. Furthermore, some of the blame is quite understandable. After all, these objections have been around for a long time.

In recent years, the WTO has made little progress while simultaneously presenting more and more drawbacks. If the WTO cannot advance, it may end up as a forgotten sidenote in the pages of history. As for the TPP and TTIP, they are fresh concepts and stand for a much higher level of free trade practices. Nonetheless, they’ve been met with even stronger opposition than the WTO. Thus, one can conclude that what people really dislike is not so much a multilateral trading arrangement but a certain type of system or rules.

What’s more, the systems they dislike are not limited to the schemes discussed but possibly include a wider range of system frameworks in multiple fields. And if that is so, phenomena such as the WTO’s failure to produce progress, the trend against the TPP and TTIP, Trump’s victory and Brexit are alarming. These factors need to be examined and reviewed in a much larger context.

For a long time in the past, a large number of people regarded European integration as a product of globalization. From that point of view, we can also declare that the exploration of large regional multilateral economic and trade cooperation mechanisms such as the TPP and TTIP are to some extent also part of globalization. However, many people have clubbed these mechanisms together under the banner of globalization to paint a broad target for their objections.

We must recognize people’s common desires and values if we wish to understand the logic behind the opposition. Most people seek to attain a well-off life. Anything that helps realize that aim or increases an individual’s sense of satisfaction is desirable. Conversely, anything that goes against those demands is usually rejected. The concept of satisfaction represents a sophisticated psychological condition in human beings, one which is influenced by diverse factors.

Moreover, a sense of satisfaction is hard to measure. Nevertheless, it is greatly related to their interaction with economics. The contemporary world is highly controlled by prices, markets and finance, which means that things can generally be measured through money and thus be traded.

Economic activity can be prized and therefore influences people’s sense of satisfaction. Under the right circumstances, it could also be of great use to measure satisfaction through monetary criteria, though it is sometimes vulgar to do so. Those who observe the protests and actions against globalization and multilateral trading arrangements such as the TPP and TTIP can gain a clear understanding of those people’s demands.

Among those who oppose globalization—apart from a small number of people who take the trend as a threat to their lifestyle­—most people seek an adjustment in their social and economic mobility. In this sense, we can say that people welcome anything that helps them gain wealth, and dislike anything that causes a decrease in wages or unemployment.

Following this reasoning, we could take the concept of globalization as human beings’ pursuit of commonwealth, equality and happiness. Therefore, theoretically speaking, people are not against globalization because of pecuniary interests. According to this concept, global resources are optimally allocated as described by Pareto optimality in economics. People are created equal, and they are guaranteed to live a well-off life until death.

However, the process of globalization is merely a method by which people can reach better living conditions. Similarly, multilateral trading arrangements and the EU are all

supposed to be a means to reach an ideal world. This shows what people protest against are the methods and plans enacted in the pursuit of globalization, not the concept or goal of globalization itself.

That is to say, the problems concerning this process are brought about by institutional drawbacks which accumulate during the process of globalization. These drawbacks were specifically demonstrated in the field of finance, exposed as the global financial crisis began, and spread as the global economy plunged downward. After the 2008 sub-prime lending crisis in the United States, the global economy continued to spiral downward, and a lot of people’s livelihoods could not be ensured. Theoretically, under the most ideal circumstances, the global economy could manage to simultaneously guarantee the stability of some people’s lives and the improvement of others. This is called Pareto improvement in economics.

However, should Pareto improvement fail, people cannot bear the impact of the institutional frameworks which create benefit for some people at the cost of others. William Shakespeare once said, “What’s past is prologue,” a statement which can be applied to the current situation. When people clamor against the trend of trade and globalization, then the multilateral trading system should either be changed or abandoned.

Since the current multilateral trading system has supported the global economy for more than 50 years, is it reasonable to label it as problematic? Or rather, isn’t it better to think that the system was carried out improperly?

People have expressed their dissatisfaction through movements such as the Occupy Wall Street protests ever since the global financial crisis broke out. But specifically, they’ve shown their concern regarding financial products, hatred of financial fraud and anger toward misleading contracts.

Unfortunately, both the rules of the EU and terms of the TPP are misleading. Ordinary people in developed countries have little ability to directly comprehend or master their contents, and can get only a small range of information via translations or the interpretations of financial, economic, social and political technocrats—this may disappoint some people.

So isn’t it an over-simplification to state that the current multilateral trading system has become rigid and unattractive to people?