When it comes to its humanitarian work, FAO is in it for the long haul 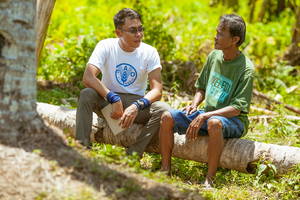 Celebrated every 19 August, World Humanitarian Day provides an annual reminder of the continuing need for collective action to alleviate suffering and want around the globe. It is also an occasion to honour the humanitarian workers and volunteers toiling on the frontlines of crises. Here, we reflect on FAO’s activities in humanitarian situations and profile some of our team who are working in the field to build a world free from hunger.

A seed takes months to develop and grow before it yields its bounty, but conflict or natural disasters can — sometimes in a matter of seconds — wipe out an entire season’s crop. And slow onset-crises like those associated with climate change sap fields and livestock, taking a steady toll on plant and animal health and culminating in “slow-motion” harvest failures.

Each year, millions of people who depend on the production, marketing and consumption of crops, livestock, fish, forests and other natural resources are confronted by a variety of disasters and crises that threaten either their food security, their livelihoods, or both. The repercussions can be felt at local, national and, at times, regional and global levels.

When the worst happens and people find themselves unable to feed or shelter themselves, humanitarian responses that provide emergency food, water, health and shelter represent critical, life-saving interventions.

However, the longer-term work that goes into helping communities build their resilience to such events, cope with them as they unfold, and recover once they subside, presents a unique set of challenges.

These are the challenges that FAO and its partners are wrestling with each day in places like Afghanistan, Central America’s Dry Corridor, Papua New Guinea, South Sudan, Syria and Yemen.

In 2016, 75 percent of the planet’s poorest, most vulnerable people remain reliant on agriculture as their primary source of food and income.

Yet agricultural development, farming, livestock rearing are activities that require a considerable time investment. They are highly vulnerable to the vagaries of the weather, and perform best in times of peace. Planting and tending crops is hard work and can be a challenge just on its own — it is infinitely more difficult in conflict zones, or when extended droughts mean that the rains on which crops and animals depend, simply never come.

FAO plays a unique role in responding to crises affecting food production and rural communities. From day one, we work to protect and restore the livelihoods of affected farmers, fishers, herders and foresters. In doing so, our resilience building efforts not only save livelihoods, but also help communities lay the foundations for long-term recovery.

Well after the TV crews and headlines have moved on, FAO remains engaged in the field, working with farmers and rural communities to build strong, productive, and resilient rural livelihoods.

This includes diverse activities such as, for example: monitoring food security trends to allow for early action; supporting food production, even as conflicts are ongoing, and helping countries and communities resume food production after they subside; and preventing pastoralist conflicts or facilitating land conflict resolutions.

Rising needs and the role of agriculture

Currently, as a result of conflict and disaster, more than 130 million people around the world need humanitarian assistance to survive. Together, they would form the tenth most populous country on Earth.

Meanwhile, recent analysis by FAO and the World Food Programme found that protracted conflicts affecting 17 countries have driven over 56 million people into either “crisis” or “emergency” levels of food insecurity.

Another FAO study has shown that droughts, floods, storms and other disasters triggered by climate change are having a large and increasing impact on agriculture in the developing world.

“Let’s not forget that underneath these staggering statistics are real lives and real people,” says Daniele Donati, Deputy-Director of FAO’s Emergency Response Division.

“Agriculture can and must be an integral part of humanitarian responses aimed at preventing the dire and complex food security situations around the world from getting worse; it cannot be an afterthought,” according to Donati. “What’s more, sustainable agriculture can be more than just a buffer — it can be the bedrock of peace and resilience,” he adds.

Learn more about FAO’s work in humanitarian situations directly from our staff in the field via this series of short Q&As:

MATTEO TONINI has worked for FAO since 2012 and is the Emergency Coordinator in Angola.

SIMEON NGUELE is a logistics assistant in Bangui, the Central African Republic, where FAO is working to revitalize the country’s agriculture sector.

BORJA MIGUELEZ has worked in humanitarian contexts in Africa, Asia and Latin America for the last 16 years, and has been FAO’s Emergency Coordinator in Lesotho since 2012.

GEORGE MVULA is from Malawi and has been working for FAO for 12 years in a number of challenging contexts, including in Somalia, South Sudan and the Gambia.

PROSPERIDAD ABONETE has recently joined FAO as the DRR/AAP and Gender Specialist in the conflict-affected province of Mindanao, in the Philippines.

KEN SHIMIZU has been working for FAO for almost a decade and is currently the head of office in Papua New Guinea, where FAO is assisting El Niño-affected farmers.

RADOS CVETIC is the acting head of operations for the South Sudan office, where he has been working for the past three years on the emergency livelihood response programme.

BALIGHA ALI SAEED TAKAN has been working for FAO in Sudan for four years and with various UN agencies and NGOs in humanitarian and development interventions for 16 years.

YAMEN JASEM is a field monitor in the south of Syria, where FAO is working to improve the food security in one of the worst humanitarian conflicts in the world.

MOHAMMED SYLLA is Guinean and is FAO’s Food Security Expert in the West Africa/Sahel region.