What the EU will learn from Trump's Taiwan blunder 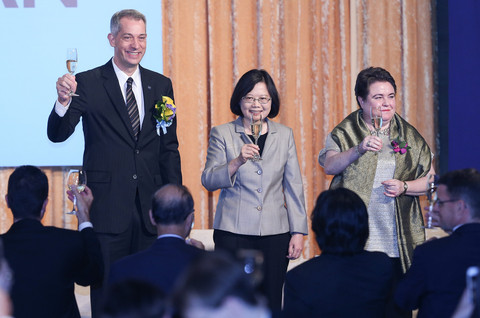 Donald Trump has landed himself in hot water with China by breaching protocol on Taiwan, but unlike the US president-elect, the EU’s approach to the island is marked by extreme caution.

“The EU recognises mainland China as the one legitimate representative for China,” the EU’s top official in Taiwan, Madeleine Majorenko, told EUobserver in a recent interview.

“For that reason, we have not formed a diplomatic relationship with Taiwan.”

This is the orthodoxy of the so-called ‘One China’ policy – the prism through which most countries have viewed relations with China since the early 1970s, when the People’s Republic replaced Taiwan (formally known as the Republic of China) as China’s representative at the United Nations.

The One China policy is simple on one level – China is a single country and the People’s Republic has sovereignty over it all, including Taiwan, Hong Kong and Macau. China regards Taiwan as a breakaway province.

But the everyday operation of this policy is not always so straightforward and is bound up with endless protocol and a particular vocabulary.

Trump discovered this after he spoke to Taiwanese president Tsai Ing-wen over the phone. No other serving US president or president-elect has spoken directly to a Taiwanese leader since the 1970s.

The Chinese foreign ministry was predictably unimpressed, labelling the call a “little trick” by the Taiwanese and lodging a formal complaint with the US.

Trump later tweeted: “Interesting how the US sells Taiwan billions of dollars of military equipment but I should not accept a congratulatory call.”

The property magnate was calling out the absurdity of the One China policy in a way that many observers have done in the past. But senior officials usually prefer to maintain diplomatic status quo on the matter.

Majorenko, speaking before the Trump controversy erupted, was careful in outlining the exact nature of the EU’s relations with Taiwan, and particularly the role of her institution, which is formally called the European Economic and Trade Office.

“We are an office, we are not a delegation here and I am called the ‘head of office’ not ambassador so it has many concrete implications,” she said. “The big overall implication is that we do not have diplomatic relations with Taiwan.”

Only a handful of nations recognise Taiwan as a sovereign country. Yet it is a member of the World Trade Organisation (WTO) and experts say the EU has long attempted to use trade in general, and the WTO in particular, as a means of de-politicising the situation.

“It is important that Taiwan participates in the international space where it is relevant and meaningful and where we think Taiwan has the possibility to contribute to solving global issues,” said Majorenko.

She said climate change or global health were areas where Taiwan could participate without transgressing the One China policy.

The EU’s approach to Taiwan and China was outlined earlier this year in a strategy paper from the foreign action service.

The paper was mostly concerned with deepening relations with China and rebalancing the trade deficit.

On Taiwan, the strategy is more cagey, reaffirming the EU’s belief in the One China policy and offering heavily caveated support for its international actions, saying that the EU should “promote practical solutions… wherever this is consistent with the EU’s ‘One China’ policy and the EU’s policy objectives”.

The paper does, however, hold out the promise of an investment deal with Taiwan.

“Building on the investment provisions under negotiation with China, the EU will explore launching negotiations on investment with Hong Kong and Taiwan,” the paper says.

Taiwan has been pushing for such a deal for several years, but progress has been slow.

Philippe Le Corre, an expert in EU-China trade relations, told EUobserver he was dubious whether any deal with Taiwan would be completed – but certainly not before an agreement with China is signed.

He points out that the Chinese market of well over 1 billion citizens is vastly more important to the EU than Taiwan, with a population of just over 23 million.

Although trade with the island has ramped up in the last decade, with €44 billion worth of bilateral trade last year, it is dwarfed by trade with China, which stood at more than €520 billion last year.

Majorenko gave away very little on the possibility of a deal, saying simply that “it’s for the commission to take this policy forward and how to do this in a concrete way”.

If such a deal was already difficult to envisage, Trump’s diplomatic faux pas perhaps kicks it further into the tall grass.

With Taiwan once again top of the news agenda, Beijing will be watching closely for any signs of deviation from the One China orthodoxy.

While an investment deal would not necessarily be a transgression, the stakes have certainly been raised.

As Majorenko stressed when talking about Taiwan-mainland relations, the EU’s position is “do not rock the boat, do not make tensions flare up in the region where it’s so easy for tensions to flare up”.

It’s clear that some prospective world leaders haven’t subscribed to this mantra.