What is the Kernel of all US policy today? 11 mins ago Opinion 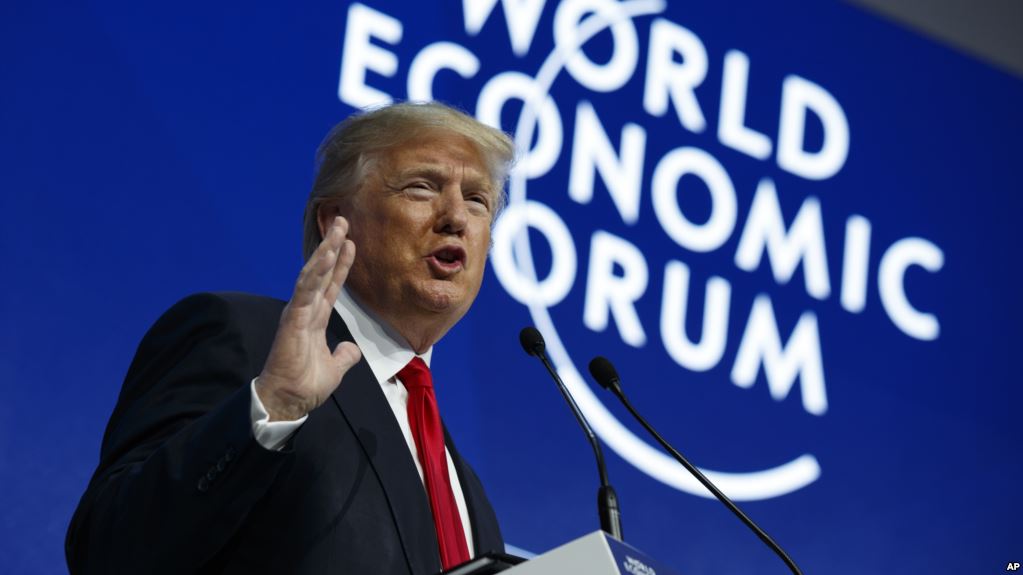 “America First” is a euphemism for the weakling if not the destruction of the whole panoply of international institutions whose very existence is antithetical to a mindset of “my nation first” So Trump’s policy will nearly destroy or reduce the effectiveness the UN, UNCTAD, UNICEF, ECOSOC, UNESCO, Clean Air Pact, NAFTA, the Pacific Trade Alliance and so on. It is in effect, a rejection of globalization and a support for localized populism which is the first step to world war that we thought ended in 1945.

The US Stock Exchange is going through the roof. Two other times this happened, it brought world economic chaos. The great depression of the 1930s ended up in World War II and the 2008 financial crises whose effects are still with us. What really is the difference between “America First” and “North Korea First”? Do people still remember Hobbes and Locke and Jean-Jacques Rousseau and even Darwin? Hobbes described the notion of “ME FIRST”, which he characterized as “the state of nature”. Society can survive only by giving up a little liberty in the state of Nature for the sake of all.
For a man who boasts of an exceptionally high IQ, President Trump’s knowledge of history and philosophy of mankind is abysmal.

But Trump is good for us, because he reminds us of why we should have a great deal of skepticism for politicians and government – they are hypocrites, they are liars, they are manipulators. Whenever you meet someone who starts a conversation with “Believe me, what I am about to tell you is a top secret between me and you”, “What I am doing has never been seen in the world before”, etc. – all these are preambles to a great whooper – hyperbolic lies.

In the last few weeks the United States has set out is foreign, strategic and defence and economic policies which not only emphasize a withdrawal of the US in world Affairs: it has stipulated that Russia and China are the real and present danger to the United States: it has announced aggressive policies against so-called rogue regimes of Iran, North Korea, Syria, Libya, Iraq and now Palestine. No longer would diplomacy be the dominant card to play. The US would be a bully ready to punish all countries which do not follow its policies, withdraw aid, both humanitarian and development, in absolute abandonment of those principles of liberty, freedom, self-determination and the guarantor of world peace.

In these circumstances, is Africa’s future economic growth possible? Who would buy our products and at what price? Are we going to survive the internet age? What is the net flow of capital going to the West? The whole institutions and panoply of World Trade Organization are at risk.

The West is consumed by a massive race in technology.
Hybrid cars, electric cars, alternative energy and many other innovations are ongoing strategies in the West.
Is there anyone in NNPC studying what to do with oil when nobody wants it? Is there a Research Department in NNPC? We were producing 2.8 million barrels of oil a day when prices were US$120. Today, we produce more for less money? Indeed, what has gone up in price for any Nigerian and African products?

We need a new economic model. The plight of being a primary producer is clearly ominous. The West, China, Russia scoop the earth of Africa for minerals such as magnesium, Columbite, Cooper, Calterse and Iron. Now, we hear they want to scoop coal and sand. What do we gain? We must learn to think outside the box.
When the West dreams of the future what do they dream of? Artificial Intelligence and technological revolutions which will change the quality of life, electric cars that can pick one up to work and back and therefore there is little or no reason to own your personal car. Your car, if you own one, would be hired from 9am to 5pm when you are at work, thus making money on your idle car.

They dream of using algorithms to solve all their problems. As an astronaut who lived in space for one year put it: “if you can dream it, you can do it”. We in Africa, have these mundane dreams about sudden wealth without working, about an Eldorado in Europe and United States.

When we dream in Africa, we dream of flying to the US and Europe to work, while government plans mainly seek to be more like London and Paris, Berlin and Dubai and Singapore, which have wide roads, high rise structures, steady power supply, etc. The West is investing in Stem Cell Research for curing many diseases, along innovations and investments in artificial intelligence, new technologies, driverless car, trucks and buses, 3D printing for medical uses, for example, producing prosthesis.

Amid all of these technological developments, there is political underground revolution stoking the fires of populism and Nationalism which is on the rise in Scotland, Europe and the United States. The United Kingdom has just voted Brexit. Scotland almost voted “yes” in a referendum to leave Britain. There are break away movements in Italy where the Veneto want to secede. In Spain, there are three breakaway movements: Catalonia, Galatia and Basque movement.
Korea is entangled in a dispute between North and South Korea that may well lead to another World War.

In Austria, there is an ultra-right wing populist government, the first since 1934. In France, Marie Le Pen is leading an ultra-right movement aimed at stopping all immigration and socialist infrastructure that France has depended on for so long.

In Russia, there are problems in Ukraine, Estonia, Georgia, and Chechnya. China has pockets of resistance, especially Mongolia and Tibet.

These developments force us to ask whether pluralism and diversity have failed. Has globalization any future?
EU has been the model for peace, prosperity, stability and progress since 1945, a world peace that is over 70years now.
It led to reduction of individual national character and the enthronement of Europeanism; the upliftment of Europeanness, and consolidation of European interests.

The EU set example which was followed by ASEAN and African Union, ECOWAS, etc.
Suppose for a moment, that the United States had a more enlightened and wise President in office at 9/11. He might have sought to catch the culprits and their sponsors and perhaps imposed heavy fine on Saudi Arabia for the destruction caused by 9/11. After all, the US forced Kuwait to pay for its defence when it was attacked by Iraq.
Are nations responsible for what their nationals do overseas?

9/11 is the story of 6 Saudis working for another Saudi, Osama bin Laden, who took refuge first in Sudan, and thereafter in Afghanistan. The result of 9/11 was 17years of war in Afghanistan followed by a bigger war in Iraq? What was the problem in Iraq? How did an atrocity committed by Saudis metamorphose into an attack on Iraq? The United States took no action against Saudi Arabia even though Bin Laden’s father, mother, brothers and sisters were all well and alive in Saudi Arabia. Bin Laden was being paid over US$50 million from his father monthly, accruing as proceeds that were allotted to him, from his father’s estate. In normal circumstances Saudi Arabia would have been subjected to severe economic sanctions and pressure to produce Bin Laden, but the West did not have the courage to pressure Saudi Arabia. It took its vengeance against
Afghanistan, a backward Muslim country.

If Saudi Arabia had been put under pressure, the Saudis may have retaliated by cutting off oil sales and refused procurement of Western arms. Since 9/11 there has been no report that anyone has dealt with the families of those 6 Saudis or their sponsors. Indeed, the initial speculation was that the terrorists of 9/11 were Iraqis. When it was shown that they were not, a new pretext – the owning of weapons of mass destruction by Iraq under the rule of General Hussein became the excuse for a thoughtless and reckless Western adventure into Iraq. In reality, Iraq had no weapons of mass destruction. If the Saudis had been pressed on to bring in Bin Laden, there would have been no war in Afghanistan and Iraq. Both wars were very costly to the US in terms of personnel and money but more important, it led to the beginning of failure of the US as the world power, while incentivizing a reckless puritanical Muslim backlash and worldwide terrorism.

Was the West right to attack Syria and close her airspace? What for? Why was it not possible to negotiate in Syria, Iran and Iraq and Libya, rather than insist on regime change, while sponsoring massive sanctions and factions against these countries and encouraging resistance movements?

Why was the West so eager to show power in Libya, Iraqi, Syria, Afghanistan and Yemen? The upshot was the release of a thoughtless Islamic vengeance on all, including other Muslims, all Western and African countries, Indonesia, Pakistan, the Philippines and world over.

Why is Saudi Arabia not on Trump’s list of countries for extreme vetting?
President Trump really takes things above board, by supporting his racist immigration policy with shallow excuses such as the bomb attack in New York, being carried out by an Afghan immigrant. Who destroyed Afghanistan if not the US?
Gaddafi and Saddam Hussein – perished with dire consequences for their countries because, among other things, they gave up the nuclear option.

Why should anyone believe that the US, Great Britain, France, China and Russia; the five original nuclear powers would always be reasonable and would be mutually deterred from using nuclear weapons?

Now that you can miniaturize the weapons or monitorize the weapon, what are the dangers?
The quarrel between North Korea and the US is whether the North Koreans have a right to have nuclear weapons. North Korea is not a party to the Nuclear Non-Proliferation Treaty, which has survived mainly because so many countries have breached it.

Its argument is that the ruler of North Korea is unstable and would, in a pique of madness, launch a nuclear attack on the
US. How many bombs has the US and how many has North Korea? There is little doubt that the US could destroy North Korea if it so chooses but at what cost? “Little Rocket Man”, as Mr. Trump calls Kim Sung, May well be unbalanced but I do not believe that North Korea has a monopoly of being unbalanced. If North Korea believes that the nuclear weapon is existential to its survival, should our attitude be one of confrontation? Where are the world leaders who can reach both the dotard and the little rocket man?