What happens the day after Kurdistan independence referendum? 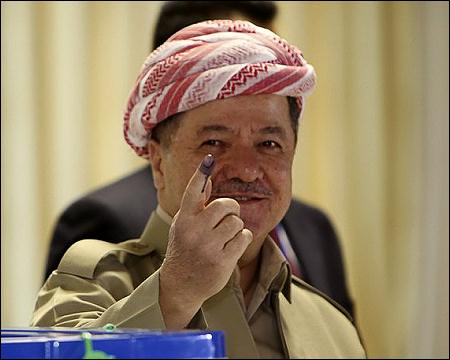 Massoud Barzani, whose term as Kurdistan President ended on August 20, 2015 but refused to step down and remains unofficially in office, casts his vote in the region’s parliamentary elections, Sept 21, 2013. Photo: Reuters

On September 25, Iraqi Kurds will head to the polls not only in Iraqi Kurdistan, but also in territories disputed between Erbil and Baghdad to vote in a referendum on whether Iraqi Kurdistan should become independent. Massoud Barzani, the region’s de facto president (his term expired two years ago but he refused to step down), has written that the referendum will be binding.

Diversion rather than national aspiration, however, may motivate Barzani. He has presided not only over Iraqi Kurdistan’s boom but also its bust. The region is over $20 billion in debt, its democracy is a distant memor, political patronage trumps merit, and young Kurds are suffocating within a culture of corruption. Court journalists and access-seeking academics focus more on covering up problems than resolving them.

In Kurdistan Rising (Kindle here, download here, and Kurdish here), I examined the issues facing each region of Kurdistan and the obstacles they must overcome post-independence to avoid a quick descent into state failure. With Iraqi Kurdistan, economic, diplomatic, and military obstacles all remain. In short, Kurdistan will be born heavily indebted with borders disputed and with a military lacking both unity and major capacities such as air defense.

Given the obstacles Kurds face, what can they expect the day after they vote for independence?

The referendum attaches no timeline to independence despite Barzani’s declaration that the results will be binding. Barzani is telling different audiences different things. While he promises Kurds independence, he tells diplomats that he wants only to bolster his negotiating position vis-à-vis Baghdad and independence will be a subject for an indistinct, undefined horizon measured less in weeks and months and more in years if not decades. That said, the independence drive unleashed by a referendum win will have a momentum of its own. Barzani may not be able to control subsequent events should he wish to retain any political legitimacy.

What will the United States do?

The US Government officially opposes the referendum. While the United States would ultimately adjust to any new status quo, the Kurdistan Regional Government (KRG) is deceiving itself if it believes Washington would re-engage further in the region to come to Kurdistan’s defense. Erbil is caught in a feed-back loop of its own making when the greatest American advocates for its independence and its chief interlocutors are on its payroll either directly or indirectly via large business contracts. Nor would international oil companies lobby effectively on Kurdistan’s behalf. The KRG has both burned too many bridges with its graft to expect oil companies to lobby for a promise in which they no longer believe and, regardless, when oil interests look at their balance sheet, Kurdistan compares poorly to the rump Iraqi state. Iraq would both be richer in oil resources and it would not suffer the logistical headaches of being landlocked.

What will Iran do?

The real problem Kurdistan will face the day after its referendum, however, is Iran. The Iranian government has long opposed any Kurdish independence in Iraq, largely because they fear how the precedent might impact the Kurdish population in Iran. In 2015, Iranian authorities sent a subtle warning to Barzani when a note-taker for an Iranian delegation meeting the Kurdish leader was a triggerman in the 1989 Vienna assassination of Abdul Rahman Ghassemlou, the leader of the Kurdistan Democratic Party of Iran. Last month, Islamic Revolutionary Guard Corps (IRGC) Major-General Mohammad Bagheri, chief of staff for the Iranian Armed Forces, told assembled IRGC leaders that the referendum “is the beginning of the crisis and the new challenges in the region” and called the vote “unacceptable.” Iranian Foreign Ministry Spokesman Bahram Qassemi doubled down on Iran’s official opposition, stating, “Iran calls for territorial integrity and territorial unity in Iraq, and we see the referendum at the expense of peace and stability in the region. This will trigger third-party agents and instability in the region and will not benefit anyone.” The same day, Iran’s Supreme National Security Council warned, “Although this issue might be attractive in appearance but actually, it will isolate and pressure the Iraqi Kurds and weaken Kurdistan and finally the entire Iraq.”

If Kurdistan becomes independent or even appears on the path to do so, expect Iran to undermine actively any chance for its success. Because Iraqi Kurds are so divided, the Iranian government can utilize the greed of some Iraqi politicians and the fear of others to compel fealty as Tehran’s proxies. Indeed, Iranian cooption of Jalal Talabani’s eldest son Bafil [Pavel] in an operation that compromised American contractors led to his temporary exile to London. Playing the energy card—providing electricity to regions controlled by some factions while denying it to others — is another tactic Iran can try. Tehran will likely also exploit divisions within the Barzani family, especially as Kurdistan drifts toward a Syrian-style hereditary republic: Imagine Turkey backing Masoud Barzani’s eldest son Masrour while nephew Nechirvan Barzani becomes Iran’s tool. The IRGC can also perpetrate violence — bombings, assassinations, and kidnappings — on its own. Iraqi Kurdistan is just as deeply penetrated by Iranian security services as southern Iraq, and the inflated sense of security which many Western diplomats, aid workers and businessmen have in Erbil and Sulaimani make them vulnerable. After the referendum, expect the targeting of Westerners in Erbil in addition to assassinations of key members of the Barzani family.

What will Turkey do?

In the run-up to the 2003 US invasion of Iraq and its immediate aftermath, the biggest fear among policymakers focused on Kurdistan was Turkish interference or even a Turkish invasion. Turkish intelligence sponsored the Iraqi Turkmen Front, a group which had little popular support but which claimed to represent millions. The Turkish decision not to participate or even allow free passage for US forces relieved Kurdish fears that Turkey might enter their territory as part of the coalition. The unfulfilled Turkish demand to open a second border crossing with Iraqi Kurdistan to facilitate US resupply (for which Gen. David Petraeus lobbied and to which Nechirvan Barzani had quietly acquiesced) was all about Turkey’s ability to cut Iraqi Kurdistan off from its outlet to Syria. Numerous journalists and diplomats argued Kurdish control of Kirkuk could be a flashpoint precipitating a Turkish invasion. Turkey not only shared Iran’s concern that a politically autonomous or independent Kurdistan could be a precedent to undermine its own territorial integrity, but also feared that Iraqi Kurdistan could become a safe haven for Kurdish insurgents or terrorists fighting inside Turkey.

That has changed over the years. President Recep Tayyip Erdogan and Masoud Barzani have become more partners than adversaries as Turkish businesses have flooded into Iraqi Kurdistan, often taking Barzanis as their business partners. In addition, Iraqi Kurdistan relies on pipelines through Turkey to export its oil. Here, both Erdogan and Barzani may personally benefit, as a discrepancy between metered and declared results suggest diversion after the fact of some oil.

Furthermore, Erdogan and Barzani share antipathy toward the Kurdistan Workers Party (PKK), a group which has waged a terrorist and insurgent campaign inside Turkey, but which has also gained prestige inside Iraqi Kurdistan as some Kurds turn away from Barzani’s leadership and look for an alternative.

What this means is while Ankara officially opposes Kurdish independence, Turkey feels that they can tolerate the result so long as they dominate the resulting entity. In short, an independent Iraqi Kurdistan might become the equivalent of Turkish Republic of Northern Cyprus, that is, more a colony of Turkey than a truly independent state.

What will Iraq do?

While the Iraqi government officially opposes Kurdish independence, a generation of Iraqis has become accustomed to Iraqi Kurdistan as its own separate entity and, frankly, may not care much should the provinces of Erbil, Sulaymani, and Duhok go their own way. But two disputes loom which will trump a smooth separation: First is Barzani’s decision to hold the referendum in disputed territories—Kirkuk, Sinjar, other districts around Mosul, as well as in the Diyala governorate—a move which guarantees disputed borders.

Second is financial. Iraqi Kurdistan in theory receives 17% of Iraq’s oil income. KRG coffers have received less, however, because of disputes about whether Kurdish oil should be counted in the totals from which the 17% is calculated, or whether it should be in addition to the 17%. Erbil would certainly demand money it believe it is owed. The problem is that Baghdad feels Erbil actually owes it money. There was the Kurdish looting of Iraqi banks, for example. The KRG stole about five trillion Iraqi dinars post-2014, monies which the KRG has already agreed to deduct from its budget to repay the bank. More importantly, Iraq is more than $60 billion in debt. Iraqi politicians say that the price of Kurdish separation should be, at a minimum, 17% of that debt, or $10.2 billion, a significant amount added to the KRG’s existing $20 billion debt.

Both issues are intractable; months and years of negotiation between Erbil and Baghdad will not solve them. This makes it likely that the Kurdish divorce from Iraq will be more akin to Sudan and South Sudan; Ethiopia and Eritrea; or Serbia and Kosovo rather than the Czech Republic and Slovakia.

The contentiousness of Kurdistan’s looming separation, therefore, will likely raise questions among ordinary Iraqis which will play out within days of the referendum. First, expect Baghdad’s payments to Erbil to cease. Kurdistan’s inflated civil service will likely see its last paycheck soon after the referendum, unless Barzani and his sons as well as Hero Ibrahim Ahmad, the wife of Jalal Talabani, to open their personal bank accounts to alleviate the shortfall.

Second, after Saddam’s fall, Kurdish leaders chose to work in Baghdad instead of limiting themselves to Iraqi Kurdistan. They did this for their own security: if they were part of Iraqi politics, they could mitigate the risk. If Kurdish officials vote in a referendum to separate from Iraq or even if their parties do, it is also likely that populist Iraqi politicians will demand they resign their posts. While Kurds are underrepresented in Prime Minister Haydar al-Abadi’s cabinet, Iraq’s president is Kurdish as are many senior technocrats and diplomats. The central Iraqi government may soon become an unwelcome place for any follower of Barzani and perhaps Talabani as well.

So, in short, where does this leave Iraqi Kurdistan? Kurds have a dream and they are loathe to allow non-Kurdish naysayers to deny them the best opportunity in a century for statehood. That said, the more Kurdish populists and those cheerleading for Kurdish national aspirations focus on referendum day to the detriment of what comes next, the shorter the Kurdish honeymoon might become. It is painful to say but, given the problems which Iraqi Kurdish leaders refuse to acknowledge or address, the more likely it is that Iraqi Kurdistan’s best years might now be behind it.

Michael Rubin is a former Pentagon official whose major research areas are the Middle East, Turkey, Iran and diplomacy. He is author of “Dancing with the Devil: The Perils of Engaging Rogue Regimes” (Encounter, 2014). He is a resident scholar at the American Enterprise Institute AEI. His major research area is the Middle East, with special focus on Iran, Iraq, Turkey, and Kurdish society.