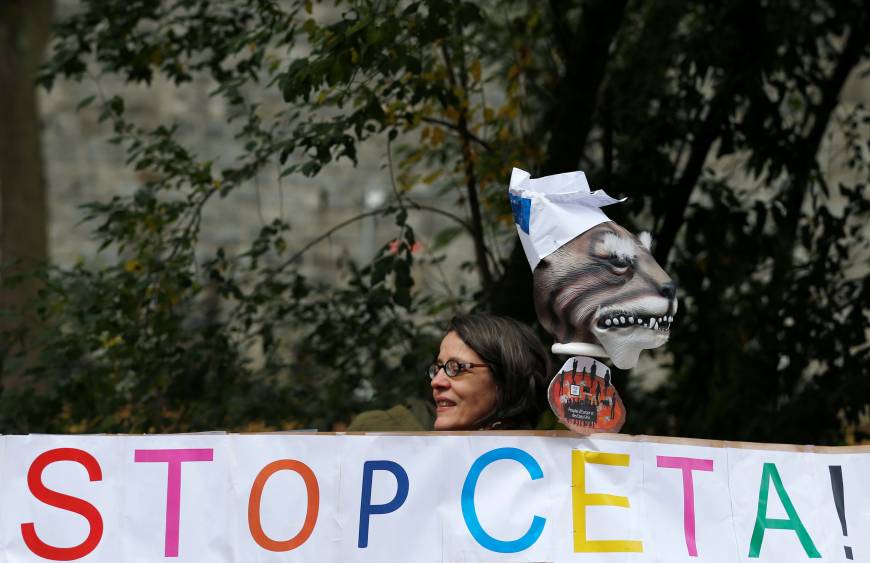 The collapse of free trade talks between Canada and the European Union Friday is yet another sign of increasingly stiff resistance to economic globalization.

Despite seven years of talks between Ottawa and Brussels, the CETA treaty crashed into a wall Friday after being rejected by the Belgian region of Wallonia, making it impossible for the European Union to approve the deal.

That was an ominous sign for another ambitious treaty, the Transatlantic Trade and Investment Partnership between the United States and the EU, which also faces strident opposition on both sides of the Atlantic.

And one huge deal already struck, the Trans Pacific Partnership between the United States and 11 other Pacific Rim countries, is foundering because of the refusal so far of the U.S. Congress to ratify it.

And now, both candidates for the White House, Democrat Hillary Clinton and Republican Donald Trump, say they do not support the treaty.

A quarter of a century since the fall of the Berlin Wall, there has been a sharp reversal of support in the world’s leading economies for freer trade and globalization, and the enthusiasm for breaking down borders appears to be fizzling out.

“We are seeing the results of several decades of failures by political leaders to take the concerns over trade seriously,” said Edward Alden of the Council on Foreign Relations in Washington.

For many years accusations have mounted that the progressive breaking down of trade barriers and removal of import duties in advanced economies has caused deindustrialization and huge job losses to developing countries.

“We’re seeing a backlash caused by that neglect for the losers from trade,” said Alden, author of the book “Failure to Adjust: How Americans Got Left Behind in the Global Economy.”

Debra Steger, a former Canadian negotiator at the World Trade Organization, sees a rising tendency to blame a country’s economic problems on foreigners. “People are blaming it all on immigrants or goods coming into the country,” she said. “They want to blame it on something that’s coming from outside, not on technological changes or on bad national policies.”

Canada turned up the heat on the European Union on Saturday, saying it was the bloc’s “job” to save the pact.

Aides said afterward that Magnette was now waiting for a statement from the European Commission that directly addresses the Francophone region’s concerns about the trade deal.

On Friday, Magnette singled out a highly controversial investment protection scheme buried in the deal that has drawn the fury of activists.

Frightened by Britain’s vote in June to withdraw from the European Union and the success of Donald Trump’s protectionist speeches, the world’s economic leaders have in recent months sought to blunt the attack on globalization.

Meeting in Washington earlier this month, the finance ministers of the Group of 20 leading economies admitted as a group that economic growth has not been “equitable” and that more needs to be done to spread the benefits of lowered borders.

A different kind of globalization is needed than the one of the recent past, they said.

It is not clear if their message is going to convince European and U.S. opponents of TTIP. Europeans especially say the proposed treaty will erode environmental and health standards to the benefit of multinational businesses.

Another key issue is that the trade deals — TTIP, TPP, CETA — all propose to include an extraterritorial dispute settlement mechanism for companies to litigate complaints against countries where they invest.

That was a particular complaint in the CETA case. Wallonia enjoyed support in fighting the deal from activist groups like Greenpeace which charged that the deal risked satisfying “corporate greed” and trampling on people’s rights and health standards on both sides of the Atlantic.

Another problem is that the proposed treaties — which gained momentum after the most recent round of global free trade talks under the WTO failed — have been carried out with little transparency for the hugely important and complex issues involved.

For TPP and TTIP, talks were to produce a final deal without interference before the details were revealed for ratification as a whole.

“There’s been a lack of transparency, a lack of explanation, and a lack of consultation with the public,” said Steger, now a economics professor at the University of Ottawa.

She said the process often leaves legislators and the public with a fait accompli.

“At the end of the negotiations, when the agreement is all finished, that’s the first time that the public is told: ‘Oh, we have an agreement. It’s 2,000 pages long and you have to approve it.’ “