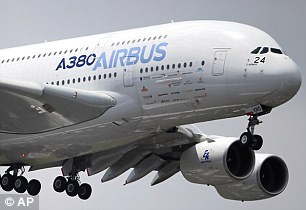 Airbus is braced for the latest twist in a bitter trade dispute with arch rival Boeing.

Billions of pounds are at stake in a long-running spat between the airlines, with each claiming the other benefited from illegal subsidies.

The World Trade Organisation is expected to give its latest ruling tomorrow on whether Airbus received subsidies from the EU.

It comes at a crucial time when international trade deals are on a knife edge because of Britain’s decision to leave the EU.

It will also cast a shadow over stuttering efforts by the EU and United States to negotiate a wider, free trade deal.

The spat dates back to 2004 when the US called on the WTO to act against EU loans to help Airbus.

This was followed by a counter-claim from the EU over aid for Boeing.

At stake are claims by the two plane-makers that raise the prospect of £17bn a year in threatened trade sanctions. Airbus could not be reached for comment last night.

Deals Of The Week