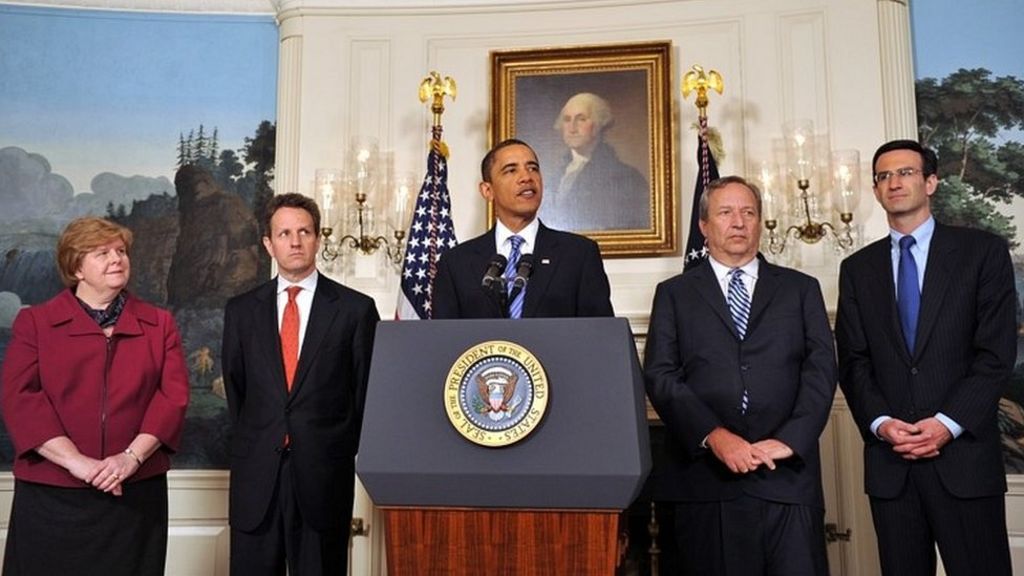 Leaving the European Union would be a “risky bet” for the UK, eight former US Treasury secretaries have said.

The advisors, who served both Republican and Democratic presidents, say it could threaten London’s pre-eminence as a financial capital.

In a Times article ahead of President Obama’s UK visit, they say it would be “difficult” to negotiate trade deals.

But Leave campaigners accused the men of double standards and “belittling Britain’s place in the world”.

“Not content with doing down Britain’s economy, No 10 are now soliciting help from across the pond,” a Vote Leave spokesman said.

But Downing Street denied co-ordinating the letter, saying the former Treasury secretaries initiated the letter themselves.

Number Ten said it was evidence of “the massive third party support” for Britain remaining in the EU.

Prominent Leave campaigners such as Boris Johnson have urged Mr Obama not to comment publicly on the question of Britain’s future in the EU – on which the public will decide in a referendum on 23 June.

Who has signed the letter?

George Shultz, who served in the Nixon administration

Lawrence Summers, who also served in the Clinton administration

Paul O’Neill, who served in the first administration of George W. Bush

The London Mayor has said he welcomes debate but believes it would be “extraordinarily hypocritical” for a US president to advocate the UK ceding its sovereignty when the US so zealously guards its own freedoms and self-determination.

UKIP leader Nigel Farage has gone further, describing Mr Obama as “the most anti-British president” of the modern era.

In a speech on Tuesday, Justice Secretary Michael Gove insisted the UK would still be able to trade freely within Europe even if it left the EU and would be better placed to negotiate individual trade deals with the US and other economic powers.

But in their letter, the eight former bankers, economists and diplomats – who include George Schultz, Robert Rubin, Larry Summers and Timothy Geithner – warn that this would not be straightforward and trade flows would be affected if the UK left the EU.

“Over time, Britain would no doubt be able to re-establish trade ties through negotiation of new trade agreements,” they write.

“But as our own experience in the United States with trade negotiations shows, it is a difficult environment to negotiate and approve agreements and the risk of accidents is real.”

The eight, who served presidents ranging from Richard Nixon to Bill Clinton, say that it is the UK’s decision alone where its future lay but that the US has a “critical interest” in the outcome.

Shared economic views and interests had been at the heart of the special relationship between the two countries, they argue, while in recent times the UK had taken the lead in Europe in rescuing the banking industry and confronting Russian aggression.

Setting out the direct economic risks to the UK of a Leave vote, they said foreign banks and other multinational institutions may no longer automatically see the UK as a “financial springboard” into Europe.

They conclude by urging the UK not to “turn inward” at a critical juncture for the European and global economies, warning that to do so could open up a “Pandora’s Box” of problems for the continent.

Although current US Treasury Secretary Jack Lew has not signed the letter, he voiced his support for the UK to retain a strong voice in Europe at last week’s meeting of G20 finance ministers in Washington.

Speaking on BBC Radio 4’s Today programme, Mr Summers said the rest of the world would see Britain as less relevant and less significant when it was on its own.

But former UK defence secretary Liam Fox told the programme leaving the EU would not mean mean isolation but Britain setting itself free from a “sclerotic and inward looking Europe”.

US politicians had failed to take account of the decline and failure of the EU economy, he said.

Leave campaigners have insisted the UK could be a member of the European free trade zone while being outside the single market and not being subject to punitive tariffs on its exports and imports.

But speaking on BBC Two’s Newsnight, former World Trade Organisation chief Pascal Lamy said the “notion that you exit the EU trade-wise at no price is simply a lie” and departing the single market would have consequences for trade beyond as well as inside Europe

But former Labour foreign secretary Lord Owen, who backs EU exit, told the same programme the “balance (of trade) was in the UK’s favour”.

As temperatures rise ahead of President Obama’s visit to London – expected to be the last of his presidency – former defence secretary Liam Fox has said it would be wrong for the US president to pronounce on the issue while in the UK.

“The president, is of course, welcome to his view when the US has an open border with Mexico, a supreme court in Toronto and the US budget set by a pan-American committee,” he told the Guardian.

“Then his views might hold greater weight when he urges the European equivalent on the British people.”

No 10 has said the visit – in which President Obama will also have lunch with the Queen at Windsor Castle – is an opportunity for the UK and US to discuss common security and economic challenges.

In other referendum developments on Tuesday, the European Commission president Jean-Claude Juncker said Brussels meddled too much in the private lives of Europe’s citizens and this had damaged the “attractiveness” of the European project.