US trade deal loses political backing on both sides of Atlantic

Prague was one of the enthusiastic backers of what was once describes as the most ambitious trade deal ever – TTIP or the Transatlantic Trade and Investment Partnership. Not a vociferous backer certainly, but always there when needed. 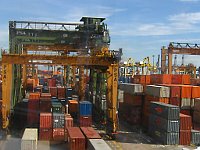 Photo: Calvin Teo, CC BY-SA 2.5 The government argued that as the Czech Republic is a small exported oriented country it could only really gain from the move to wipe out most of the customs, and more importantly, many of the non-tariff barriers between the EU and US. Given the absence of any global deal doing something similar through the World Trade Organisation, TTIP appeared the best game in town.

Figures were eventually even produced by the Ministry of Industry and Trade that around one percent of GDP, or around 900 million dollars a year, could be the maximal Czech benefit from the deal it the most ambitious version was signed and realized. Cars, chemicals, engineering, were highlighted as some of the sectors that stood to benefit most, according to the survey. How the removal of high EU import tariffs on US cars was going to help was never really explained.

Prague, and many other European capitals, were relatively slow in putting facts and figures to the deal that the European Commission was tasked with negotiating and has been doing so for the last three years. The cheerleading campaigns came as skepticism rose from those opposed to the deal that another step towards globalization would see Europe coming off worse and that many hard fought European consumer and environmental standards would come under attack from US-based multinationals.

Those arguments, especially in Germany, have won a large following as witnessed by massive demonstrations against TTIP. The left of centre Social Democrats there are now distancing themselves from the ongoing talks. Economy minister Sigmar Gabriel pointed out at the weekend that not one of the 27 sections up for negotiation has been completed after 14 rounds of talks and that the negotiations had practically collapsed. The French secretary of state for foreign trade added Tuesday that Paris now wants the talks halted, pointing out that there is no political support for them. Trade ministers next month in Bratislava could heed that call.

Looming elections in Germany and France next year as well as the US presidential elections later this year always looked like they could derail this trade deal until a new set of politicians, or the same with new mandates, might be around to give TTIP or a modified form of it a new lease of life. Added to that Brexit means that London, one of the main and active supporters of the EU-US trade deal, was no longer around to ensure continued focus on the deal as Berlin and Paris were distracted by domestic issues.

With or without TTIP, Czech trade with the US has already strengthened considerably over the past year or two to something like the level it should be with the world’s biggest economy. This perhaps suggests that the main obstacles may not have been the much vaunted tariff and non-tariff barriers but the simple self confidence of Czechs to start selling on a daunting and distant market.