Will transgenic corn make its way to Switzerland as well? With TTIP, European countries may be forced to adopt US standards.

The controversial Transatlantic Trade and Investment Partnership (TTIP), which is entering a decisive phase of negotiations, could have wide-ranging consequences for Switzerland, even though it won’t be a party to the treaty.

There is massive opposition to the agreement being discussed between the United States and the European Union despite assurances by governments that the accord will encourage economic growth and create jobs, not only in the US and EU but worldwide.

The deal aims to reduce customs tariffs, bureaucracy and barriers to investments which hinder exports and trade ties between the US and EU. But there have been fears that the TTIP will have an enormous impact on a wide range of norms affecting people on both sides of the Atlantic, from consumer issues to health and public services, labour laws and the environment.

Opponents argue that the TTIP will weaken European standards, considered much higher than those in the US. In fact, the two economic regions contribute almost half of global gross domestic product.

Swiss economics minister Johann Schneider-Ammann has already announced that Switzerland is preparing to associate itself quickly with TTIP so that Swiss companies aren’t frozen out of the free trade agreement. 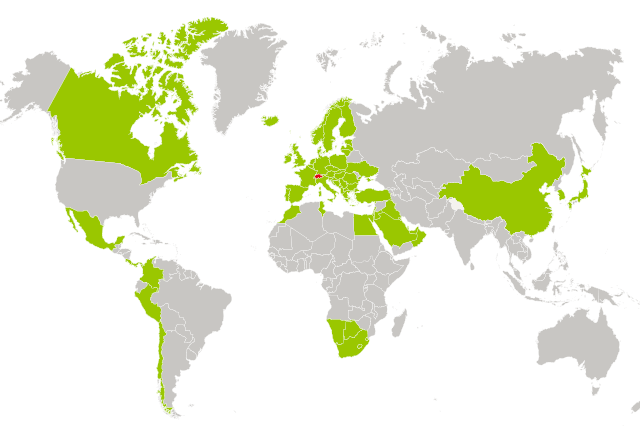 Countries with which Switzerland has signed free trade agreements

“These fears are well founded, given that the US has great interest in imposing its standards and its agricultural products,” says Sara Stalder, head of the Swiss consumer protection organization, SKS.

In her opinion, adapting American standards could have huge repercussions for consumers in the EU. Meat produced with additional hormones, accepted in the US, is banned in the EU, she says.

For her part, Maya Graf, a Green Party parliamentarian and member of an anti-TTIP coalition, argues that even though Switzerland is dependent on its two largest trading partners, food cannot be considered in the same light as car parts or electrical appliances. “Food is linked to our health, the well-being of animals, the environment and all available resources. That’s why we’re asking that these products be excluded from a potential agreement.”

Not surprisingly, the Swiss farmers’ lobby is also concerned about the consequences if Switzerland adheres to the TTIP. The sector sees the country being flooded with cheap American agricultural products. Ten years ago, pressure from farmers successfully killed a government plan to sign a free trade deal with Washington.

“We are obviously worried since we are not in the same league as the US. Our agriculture can’t compete with large American farms that have more than a thousand heads of cattle,” explains Jacques Bourgeois, head of the Swiss Farmers’ Union.

He added that the accord Switzerland reached in 2013 with China shows that it is possible to reach a free trade agreement that includes dissuasive customs payments for certain agricultural products.

However, Swiss firms can expect to be penalized if Switzerland misses the TTIP boat, according to the country’s leading business lobby, economiesuisse.

“This accord is of fundamental importance for our economy,” says the association’s Stefan Vannoni. “Especially for the industrial sectors, which already have to deal with the strong Swiss franc and high production costs.” He argues that Swiss companies will become less competitive compared to their counterparts, for example in Germany, since they will face the imposition of higher import taxes in the US market.

The treaty, which has not yet been signed, is designed to remove customs duties, end restrictions on access to public contracts, open up the services market, offer predictable conditions for investors, and help prevent illegal copying of EU innovations and traditional products (source: European Commission).

The Trade in Services Agreement (TiSA)

This trade agreement is currently being negotiated by 23 members of the World Trade Organisation (WTO), including the EU. Together, the participating countries account for 70% of world trade in services. TiSA is based on the WTO’s General Agreement on Trade in Services (GATS), which involves all WTO members. The key provisions of the GATS – scope, definitions, market access, national treatment and exemptions – are also found in TiSA (source: European Commission).

Sign up for our free newsletter and get the top stories delivered to your inbox.