'Underestimated' Trump could change the rules on trade: Don Pittis

Except for the people who gave up years of their lives negotiating it, there will be few tears in Canada or the United States for the Trans-Pacific Partnership.

But after what seems like the final collapse of a seven-year process to co-ordinate trade rules between Canada, the U.S., Japan and a group of nine other nations around the Pacific, what path will world trade take next?

In a very Trumpian innovation, the president-elect announced his new policy by video. And he declared that one of his first acts as president will be to KO the TPP.

“I’m going to issue a notification of intent to withdraw from the Trans-Pacific Partnership, a potential disaster for this country,” Donald Trump said, speaking his lines straight into the camera.

“Instead we will negotiate fair bilateral trade deals that bring jobs and industry back onto American shores.”

Even those who were disappointed were not surprised at the demise of the TPP. But it may just be a first step. 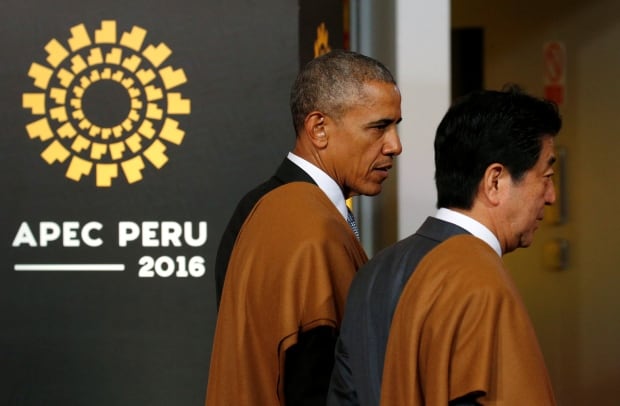 U.S. President Barack Obama and Japanese Prime Minister Shinzo Abe were key supporters of the TPP, but now Japan will be negotiating with a tough-talking Trump administration. (Kevin Lamarque/Reuters)

“With any new president you don’t actually know what they’re going to do until they start doing it,” says Wolfe,

The jobs of treasury secretary, U.S. trade representative and commerce secretary are still vacant, but with a prospective defence job filled by someone with the nickname “Mad Dog” and a leading environment post filled by someone who reportedly doesn’t believe in science, future U.S. trade policy may be more uncertain than usual.

Wolfe says there are some things Canada would like to have in TPP, but the loss of the deal will be “a catastrophe” for the U.S. The reason, he says, is that by cancelling the deal the U.S. will lose credibility in Asia.

Others have said that by dumping TPP, Trump has handed more trade power to China.

In what seems to be an ever-changing presidential policy landscape, Wolfe wonders if Trump will cancel the TPP only to “put lipstick on it” and bring it back in another form.

If he’s right, watch out for the forthcoming Trump Pacific Partnership. 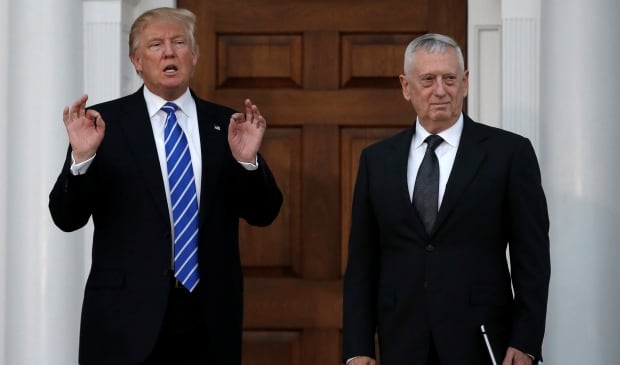 Trade lawyer Katie Sykes says it’s as if the world of trade has turned upside down in a few months.

“We seem to be in a time when what was pretty well-established received wisdom about trade is in flux right now. The Trump victory is the biggest manifestation,” says Sykes, a professor at Thompson Rivers University in Kamloops, B.C.

She says a 10-year trend to move beyond the World Trade Organization structure toward even closer integration of trade rules — what are called “mega-regional” deals such as TPP, CETA and TTIP — has simply gone off the rails. CETA, Canada’s deal with Europe, remains the only survivor.

But while much of the world has turned against trade, she says that Canada is one country unlikely to turn protectionist. Instead, it will become a global cheerleader for trade.

“It’s so important to our economy,” she says.

“How is it going to affect us if there is a general global move toward more protectionism and more isolationism? Anyone who’s studied trade history in the 1930s finds that a chilling prospect,” says Sykes.

Part of the problem with TPP and the other mega-regional trade deals was the way they were negotiated, according to Barry Appleton, the managing partner at trade law firm Appleton & Associates.

“Having sophisticated long negotiations that last for seven years and not having public consultations is not a very good way to conduct public policy,” says Appleton. “And it’s not surprising when the deal finally comes out people don’t like it.”

For the political elite, Trump may have come across as unpolished. Others talked down his skills as a businessman. But Appleton says Trump really does understand the art of the business deal. And trade is one of the areas where that is going to pay off. 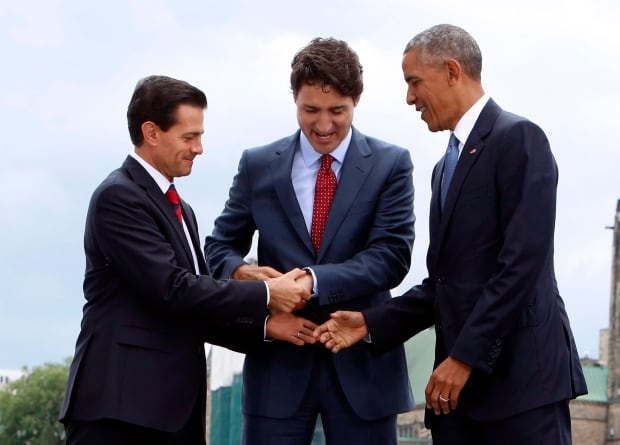 “One should never underestimate Donald Trump,” says Appleton, a dual national who has offices in Toronto and Washington.

He says with Trump in the White House the rules of trade have changed. Trump will want to get something concrete for everything he gives up.

And he says Prime Minister Justin Trudeau’s strategy, which he describes as showing Canada’s hand on NAFTA, is something Trump will take advantage of.

“What the government needs is a real good fresh entrepreneurial approach to deal with Mr. Trump,” says Appleton.

“The thoughtful, academic, scholarly way, which was very appropriate under the Obama administration, is unlikely to be the way that things proceed in the Trump administration.”