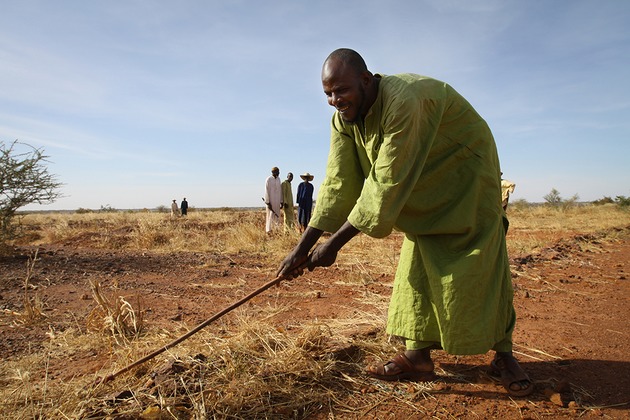 million agreement with the United States Agency for International Development

(USAID)nbsp;to boosting the capacity of developing countries to track key

that will help track progress toward achieving the Sustainable

‘In the decades to come, humanity will need to produce more food for a growing population using

natural resources such as water, land andnbsp;biodiversity in a sustainable

way ” while coping with the challenges imposed by climate change,’ the

Silva, said in a news release.

eradication target will hinge on the availability of better, cost-effective and

timely statistical data for agriculture and rural areas’ he added.

force.nbsp;Over the next fifteen years, with the aim of achieving the SDGs,

countries will mobilize efforts to end all forms of poverty, fight inequalities

and tackle climate change, while ensuring that no one is left behind.

In particular, Goal 2 of

A farmer stands alongside his crops in Ed Damazine, in Sudan”s Blue Nile State. Photo: OCHA

Agro-forestry farmers tend to their crops in Kigoma, Tanzania. Forests are an integral part of the national agriculture policy with the aim of protecting arable land from erosion and increasing agricultural production. Photo: FAO/Simon Maina

The USAID donation will cover the first phase of an

FAO-led project that will run from 2016 to 2021, starting with pilot efforts in

four developing countries ” two in sub-Saharan Africa, one in Latin America and

one in Asia. A dialogue is under way with eligible countries.

In the news release, FAO said that the AGRIS methodology

will not only capture improved annual data on agricultural production, but also

broader and more detailed structural information relating to farms, including

of ‘big data.’ These tools will introduce more objective approaches to

expensive methods. In addition to better and more detailed data, AGRIS is also

“The end result,” according to FAO, “will be high-quality data on a wide range

of technical, economic, environmental and social dimensions of agriculture that

will help governments analyse and understand the impacts of agricultural

policies, assess progress toward the SDGs and other goals, and shape better

security and economic prosperity,” the Assistant to the Administrator for