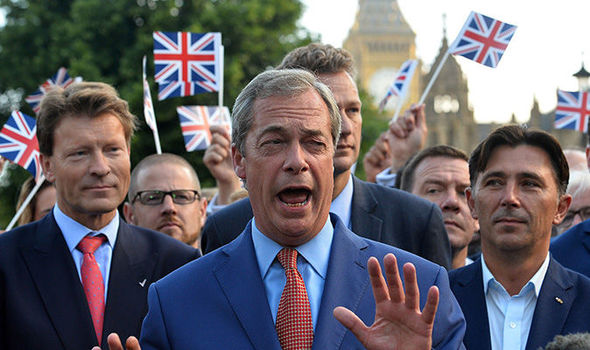 The single-issue party has recently attempted to widen its appeal by focusing on other issues – but its key message has remained one of quitting the Brussels bloc.

Now Britons have voted to go it alone, speculation is mounting the party would call it a day.

But two senior Ukip MEPs today issued a rallying call to their supporters, saying: “We cannot rest on our laurels.”

Jane Collins and Mike Hookem, who will both be out of a job in the European Parliament when Britain eventually quits the union, said in a joint statement: “Ukip secured this vote and this result and we are the ones who will watch over these negotiations.

“This is only the beginning: we have to ensure we get a free trade deal for Britain, we retake our seat on the World Trade Organisation and we start peeling off the layers of EU legislation from the statute books to make this country fair and competitive so we can have an economy of growth and jobs.”

Remain campaigners had hoped defeat in the polling booths might at least signal the end of the party they claim is divisive and stoking fears.

But Ukip, which was once described by David Cameron as a party of “fruitcakes, loonies and closet racists”, insists it still has work to do to ensure Britain remains a “successful, independent trading nation”.

Defence spokesman Mr Hookem said: “As for people asking what will happen now to UKIP, we’re not going anywhere. Our party was derided for years: our politicians and members called racist and extremist.”

He added: “Why after we’ve just had such an important victory, which wouldn’t have been brought about if it wasn’t for UKIP and Nigel Farage, why would we go anywhere when we have work to do?

“And that work has started and it will continue until we are a successful, independent trading nation taking its place proudly on the world stage, trading with our friends and neighbours and being a job creating country and a flagship for sovereignty and democracy in Europe.”

However, mystery still surrounds party leader Nigel Farage, who has yet to reveal what he plans to do with his time when he leaves his EU parliament seat in two years time.

While Farage has called today for a Brexit prime minister and a “negotiating team who are going to go to Brussels to get us our new deal”, there are no clear signs that he would play any role in such a team.