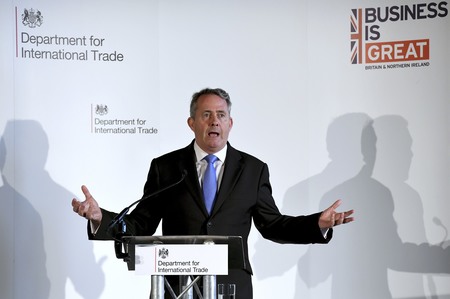 Britain wants to agree post-Brexit terms with the World Trade Organization in a way that causes minimal disruption, trade minister Liam Fox said on Sunday.Fox told an event on the sidelines of the Conservative Party’s annual conference in Birmingham that Britain did not need to re-join the international trade body when it leaves the European Union as it was already “a full and founding member”.“What we do need to have are the schedules, which are effectively our license to trade. That’s what we are discussing at the present time,” he said.“We will want to see a position on WTO schedules adopted in a way that causes minimal disruption. That is not an entirely simple process, and we would never pretend that it is, but neither is it an insoluble riddle.”(Reporting by Kylie MacLellan and William James, editing by Elizabeth Piper)