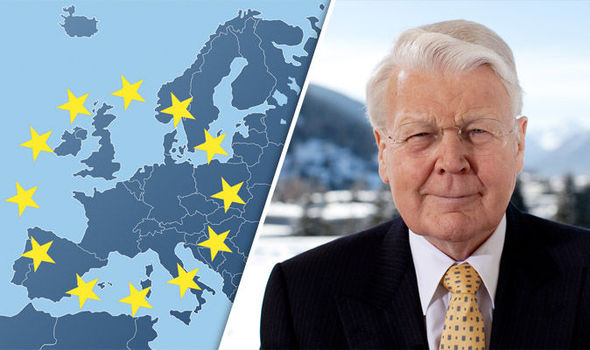 After knocking England out of the Euros, Iceland is now keen to join forces to create a new union.

President of Iceland Olafur Ragnar Grimsson said Brexit “is the most serious setback the leadership of the EU has seen for along time” as he called for a new alliance.

Mr Grimmsson said: “First of all, it is now obvious that here in the North Atlantic will be a triangle of nations that all stand outside of the European Union: Greenland, Iceland, Great Britain, Faroe Islands and Norway.

“This key area in the North will be outside of the influence of the European Union.”

Iceland and Norway are part of the European Economic Area (EEA) and are allowed in the EU’s single market.

Mr Grimmsson said Iceland’s role in the EEA will take on a new significance when talks for Brexit take place.

He said: “It is enlightening for anyone to look at a map or a globe and study this part of the world, the magnificent Greenland, the North Atlantic, Iceland, Norway, and then south to the British Isles.

“And then consider, with regards to trade and international affairs between the United States and Europe, and Asia and Europe, the key position this area will enjoy in the 21st century.”

Tory grandee Ken Clarke suggested the possibility of a Nordic alliance before the historic vote on June 23.

The former chancellor, who was against the referendum, said: “Would you agree that as a risk of uncertainty for a few months causing very considerable difficulty, would you consider the possible first step of joining the EEA which was designed in the first place for countries like Norway and Iceland where the great bulk of politicians wish to join the European Union but could not get past the ridiculous hurdle of a referendum in order to get there?”

“It would give some reassuring order and stability to our economy and might begin to attract a little investment and future prospects for our country.”

Norway’s Prime Minister Erna Solberg poured cold water on the idea saying to become a member of the EEA, Britain would need unanimous accord of all 27 member states, the European Parliament as well as the four European Free Trade Association countries.