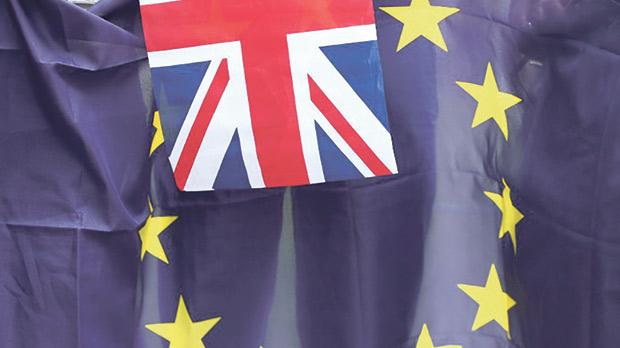 A British Union flag flies in front of an EU flag during a pro-EU referendum event at Parliament Square in London, yesterday. Photo: Neil Hall/Reuters

British insurance broking would be better off if Britain remained in the EU, an industry trade association said yesterday.

The British Insurance Brokers’ Association said in a statement that while it remained apolitical, it had reached its position following discussion with its members.

Britain votes in a referendum on Thursday on whether to leave the EU.

Brexit would lead to uncertainty for businesses, while a lack of access to the ‘passporting’ system enabling financial services to be sold across Europe could reduce business for brokers and choice for consumers, BIBA said.

“A ‘Remain’ vote would stimulate investment and boost confidence that we will be able to continue to trade freely under the EU freedom of services provision,” BIBA chairman David Hunt said in the statement.

Major insurers such as Lloyd’s and Legal & General have spoken in favour of Britain remaining in the EU.

US insurer AIG said last week it may look for a European headquarters outside London if Britain voted out. But Dominic Burke, chief executive of broker Jardine Lloyd Thompson, was among 110 signatories to a letter from City of London figures earlier this year backing Brexit.