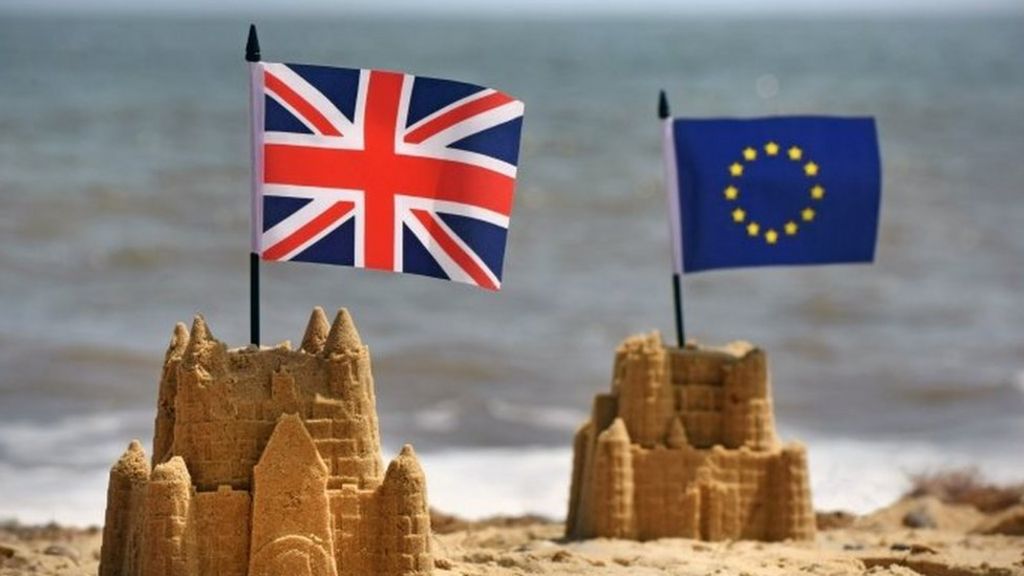 A group of major business lobby groups has written an open letter urging the government to preserve barrier free trade with Europe.

The letter is signed by leaders of the CBI and manufacturers’ body the EEF.

It says the way in which the UK leaves the EU and on what terms is critical for jobs and investment in the UK.

It says defaulting to trading by World Trade Organisation (WTO) rules would leave 90% of UK goods trade with the EU subject to new tariffs.

The letter says that would mean 20% in extra costs for the UK’s food and drink industry and 10% for car producers.

These significant costs would affect British exporters and importers, as well as those in their supply chains, it adds.

“We respect the result of the referendum, but the government must make sure that the terms of the deal to leave ensure stability, prosperity and improved living standards,” the groups write.

“Every credible study that has been conducted has shown that [the] WTO option would do serious and lasting damage to the UK economy and those of our trading partners.”

The letter calls for the government to “give certainty to business by immediately ruling this option out under any circumstances”.

One of the signatories, CBI Director General Carolyn Fairbairn, said the letter called for “ruling out of the really worst options, to reassure investors that the UK was still a really good place to invest”.

“There is a negotiation that’s going to take place, and I think businesses completely understand that,” she said.

“But falling into WTO rules in only 29 months from now, would mean up to 90% of goods could potentially have tariffs on them, there would not be the passports for our services industries. “

It increasingly looks as though Britain is heading for a so-called ‘hard Brexit’ – and business leaders are becoming very worried.

At the Conservative Party conference, Theresa May made it clear the country would not remain in the EU’s single market, if doing so meant losing control of immigration. Yet European leaders insist that free movement of goods and services comes hand in hand with the free movement of people.

The uncertainty – and the prospect of trade with the EU becoming subject to tariffs and other trade barriers – has been driving down the value of the pound, which has been trading against the dollar at a level not seen in more than three decades.

So this letter offers a stark warning. The UK, it says, needs access to the single market. Leaving the EU and reverting to international trade rules would do serious and lasting damage to the UK economy. Costs for businesses would go up. Jobs could be lost.

But this message isn’t new – and the evidence suggests the prime minister has other priorities. So will she be listening?

The letter she signed also says there is a wealth of evidence to suggest EU negotiations will not be completed within the Article 50 two-year timeframe.

“Many areas of regulation now up for discussion are highly complicated… The government should therefore secure agreement of a transitional period, to ensure that businesses can continue to operate with no ‘cliff edge’ change to current circumstances until regulatory and legal changes can be implemented,” it says.

It concludes that the UK voted to leave the EU but not to cause living standards to decline: “We want a Brexit that safeguards future prosperity for everyone across the UK.”

National chairman of the Federation of Small Businesses Mike Cherry said the effect of uncertainty on the market was reflected in its quarterly index, showing confidence at its lowest level since 2012, and causing problems for small businesses.

But he added: “On the other side of that, there are many small businesses looking to overseas markets to export their goods, products and services.

“For them, this does present a tremendous opportunity to grasp more of the market overseas.”

At the Conservative Party conference on Sunday, Prime Minister Theresa May said she would trigger Article 50, the clause needed to start the process of exiting the EU, by the end of March 2017.

She told members a “trade-off” between controlling immigration and trade with Europe was the “wrong way of looking at things”.

Britain, she said, had voted to become a “fully-independent, sovereign country” and would “decide for ourselves” how immigration was controlled alongside “the best deal possible” with the EU.