UK aid 'must give value for money' 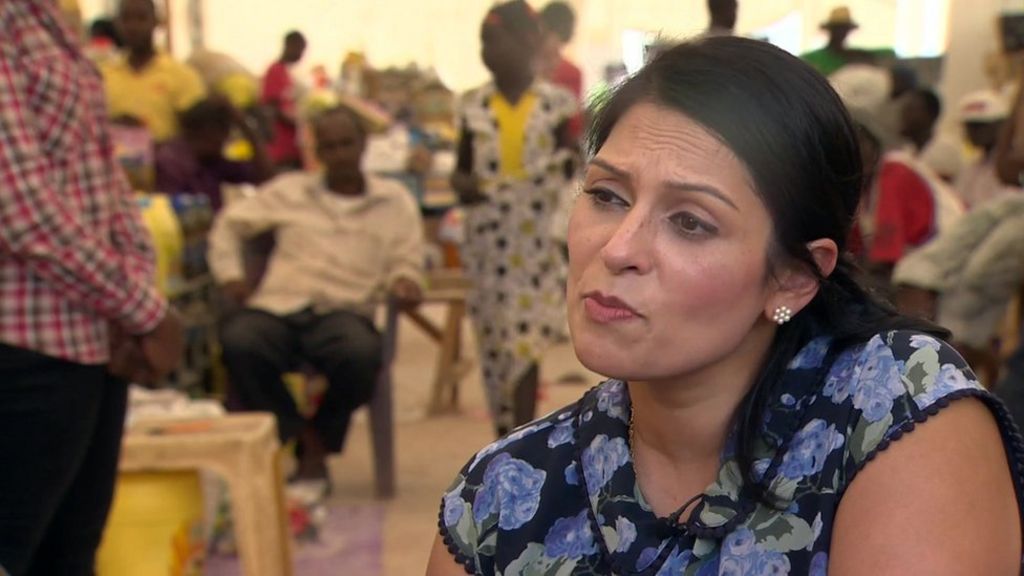 More than £4bn of UK aid goes to global organisations such as the World Bank.

In an interview in Kenya with the BBC’s James Landale, Ms Patel also said that she wanted to use the aid budget to help pave the way for trade deals.

But Labour said Ms Patel had “no mandate” for changing how aid was given and called on her to abandon the plans.

Ms Patel, who was speaking on her first visit to Africa since she was appointed to her new role, witnessed what some of her department’s £12bn budget is supporting on the ground.

She saw humanitarian aid being delivered, via a payment card that gives Kenyan women £20 a month from the British taxpayer to buy the food they need to survive.

She said: “We have to make sure that our aid works in our national interest and also that it works for our taxpayers. Much more openness, much more transparency and much more accountability.”

She is about to publish a review of the work of big multinational aid organisations that spend money on behalf of the UK, and said she would cut off funding if they did not meet new performance targets by spending better and wasting less.

“The government’s approach is focused on ensuring that we drive taxpayer value – so when it comes to multilateral organisations, focus on performance agreements,” she said.

“If they are not performing then obviously we’ll look at the contributions that we give to them. We need to be challenging.”

Ms Patel was referring to agencies such as the World Bank, the European Union and other smaller bodies. They spend 40% of the UK’s aid budget.

It is the first time this multilateral funding has been reviewed as a whole for five years.

Our diplomatic correspondent says Ms Patel also wants to use bilateral aid to secure new trade deals and make allies in the World Trade Organization, which the UK will need after Brexit. She also hopes to use aid to reduce the flow of migrants to Europe.

Ms Patel said: “British soft power is exactly where DfID (the Department for International Development) and our aid and other relationships around the world come together to deliver in our national interest and deliver for Britain when it comes to free trade agreements but also life post-Brexit.”

Government officials would not name specific projects potentially at risk in the Multilateral Aid Review but pointed to criticism levelled at the World Health Organisation for its handling of the Ebola crisis as an example of where reform was needed.

Ms Patel has been a longstanding critic of some aid spending and her remarks will unnerve many multilateral agencies and non-governmental charities opposed to the idea of further so-called “conditionality” being imposed on their spending, our correspondent says.

She told him she wanted to use Britain’s aid budget to boost economic development, announcing a £30m programme to encourage more job-creating investment in Kenya.

And she promised £95m to help Kenya break down barriers to trade, particularly by speeding up the flow of goods through the port of Mombasa.

She said she would undertake joint missions overseas with International Trade Secretary Liam Fox to gather what she called “intelligence” about economic opportunities for British businesses.

“We are a global leader when it comes to international development, we have a strong footprint overseas and it is right that we use that footprint in the national interest,” she added.

“She seems fixated on imposing her dogma of the free market over the clear evidence that UK aid is the most efficient and effective in the world.

“It reaches the people who need help, including many young girls and women.”