Uganda:Refugee Scandal – the Inside Story 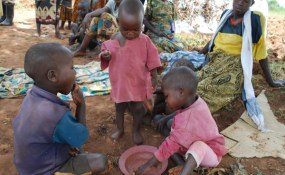 Kampala — Panic has gripped every office that has a role in managing the refugee situation in Uganda.

All major donors are investigating and have called for investigations into what is suspected to be one of the most comprehensive heists Uganda has seen in recent years.

Government officials charged with managing the refugee situation are in disarray. Similarly, the entire United Nations (UN) system in the country is on tenterhooks, unsure of how the inquest that has been launched will end.

Under the UN system, the agency primarily charged with handling refugee matters is the United Nations High Commission for Refugees (UNHCR), which works closely with the World Food Programme (WFP) when it comes to distributing food relief.

In the context of the ongoing inquest regarding abuse of refugee resources, it would ordinarily be expected that these are the two primary agencies to be probed.

But our sources say all UN agencies in the country, including the office of the UN Resident Coordinator Rosa Malango, who is also the country coordinator for the United Nations Development Programme (UNDP), are being probed.

In fact, the sources add, UN investigators flew into the country without informing Ms Malango, the UN boss in the country.

Our sources say very big monies are involved and the UN is under pressure to make sure that its systems in the country are clean, or that in case some of its officials have participated in the abuse of resources made available for refugees, the culprits are brought to book and the system is cleaned.

Our sources say the UN cannot have it any other way because its principal funders, especially the European Union, US and UK, are pressing hard for an in-depth inquest.

The sources say that whereas the rot in the Refugee Department in the Office of the Prime Minister has gone on for long and warrants a probe, the immediate trigger for the calls for the inquest is the money that was generated during the Uganda Solidarity Summit on refugees held in June 2017.

At the summit, UN Secretary General Antonio Guterres described the refugee influx from South Sudan into Uganda as "the biggest refugee exodus in Africa since the Rwandan genocide."

President Museveni said at the summit that whereas the countries of the Great Lakes region have in the past openly received refugees and will continue to do so, the sudden large numbers of refugees that Uganda has received in the recent past present problems that include providing food and shelter, energy for cooking and light while preserving the environment, providing water, education, and addressing health needs, among others.

Private sector players also pledged support, with telecom company MTN leading the pack with a pledge of $1m. More pledges were made in kind and in total $350m, or Shs127b, were made towards supporting the refugee effort.

With so much money suddenly made available for the refugees, sources say, UN officials got concerned about how the money would be kept and used effectively to benefit the refugees and not stolen or misallocated.

Is the money safe?

An argument ensued, with UN officials backing the creation of a special account on which the money would be kept.

Our sources say the Uganda government was opposed to this arrangement with Mr Apollo Kazungu, the Commissioner Refugees, arguing that there existed a Department for Refugees that had over the years gathered experience and managed the resources for refugees in the country.

Mr Kazungu, our sources say, had the support of some influential people in the corridors of power in Uganda and carried the day. The money was put on the government account.

Months later, sources knowledgeable with the matter have told Saturday Monitor, a whistleblower tipped off the major donors that much of the money that was raised during the summit has since been withdrawn from the account.

Armed with this information, our sources say, the donors, chiefly the European Union, which pledged $96.3m at the summit; UK, which pledged $50m and US, a major contributor to UN refugee operations, led the charge to seek answers.

In short, well over three quarters of the money that was pledged for refugees at the summit came from the European Union, its members and UK.

Our sources say with this information at their disposal, the donors and UN started to take more seriously the complaints of refugees, which had been filed repetitively over the years but had been literally swept under the carpet.

There are also allegations of trafficking of minor girls and women to marry men who are not of their choice after paying a bribe to officials at the border crossing points and claims that officials interfere in the election of leaders in refugee communities to prevent individuals deemed too vocal from getting elected.

But by the time the investigations are done, our sources say, questions will have been asked about the account on which the money raised during last year's summit for refugees was banked, and the whereabouts of whatever money could have been withdrawn from it.

There is also a feeling that by the time the inquest is done, there could be interesting findings about the way the UN system in Uganda works.