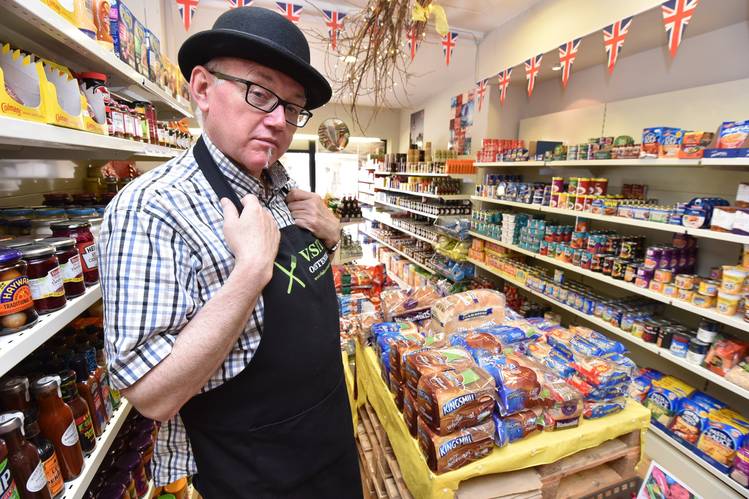 The owner ot the ‘British Goodies’ shop in Oostende, Belgium, sells only imported British products, including bread, beans, sauces and newspapers; he says his customers talk only about ‘Brexit.’

As Britain’s referendum campaign entered its final week, the big beasts of the ruling Conservative Party were fighting anew over prospects for the British economy if the U.K. leaves the European Union.

Two former Conservative leaders and two ex-Chancellors of the Exchequer rejoined the battle Thursday, accusing the Bank of England and the U.K. Treasury of a “woeful failure” to present “a fair and balanced analysis” of the economic consequences of a British exit.

David Cameron retorted that those campaigning for exit were gambling with the people’s livelihoods “for their own political ends.” The EU’s single market underpinned the strength of the British economy, he said.

Most economists, as well as international bodies like the International Monetary Fund, stand with Mr. Cameron. Yet those economists backing exit deal with the same economic theories. How can one side be so gloomy and the other so unworried?

True, there are different assessments of how much short-term damage would be caused by the economic uncertainty a decision to leave would create. Most economists, even on the Leave side, admit there would be some harm, but they play down its extent.

There is divergence also on whether the U.K. would be drawn into a more stifling economic regime by remaining an EU member.

But the single biggest difference over the economy’s long-term prospects is this: Would the U.K. economy be more open to the outside world in the EU or outside of it?

Most assessments about the U.K.’s future outside the EU assume the economy would become more closed, facing greater trade barriers for its exports and erecting more obstacles on imports.

There is a strong consensus among economists that economies benefit from openness because they enjoy greater scale and economic specialization, increased competition, heightened innovation and an improved allocation of capital.

Most official forecasts suggest that the post-exit economy would become more closed because the U.K. would lose some access to the single EU market of 27 countries and 440 million people, and to the more than 50 countries with which the EU has trade agreements.

The four prominent Conservatives—Michael Howard, Iain Duncan Smith, Norman Lamont and Nigel Lawson—say that just ain’t so. Because the U.K. runs a trade deficit of almost £70 billion ($99 billion) with the rest of the EU, “it would be an absurd act of economic self-harm for the EU to start a trade war with Britain,” they wrote in a letter to the Telegraph.

In fact, the official forecasts don’t assume a “trade war.” The Treasury’s worst case—that Brexit would leave Britain’s gross domestic product 7.5% behind where it would otherwise be after 15 years—is that the U.K.’s trade ties with the EU and the rest of the world would be guided by World Trade Organization rules. In other words, it would become like its current relationship with the U.S.

Economists backing Leave, however, doubt this WTO scenario. Andrew Lilico, who runs an economic consulting firm, says the Treasury assumes the biggest damage to the economy would be “created, in significant part, by us”—that is, by the U.K. lifting tariffs and otherwise restricting imports.

More likely, he says, the U.K. in the long term would have the same degree of openness post-exit as it does now, becoming a bit less open to the EU and more open to the non-EU world.

That would leave high tariffs on U.K. exports just about everywhere, and no leverage to negotiate reductions. But he says it would create a more dynamic economy—albeit one that would have to undergo an epic transformation with existing industries, including much of British manufacturing, going to the wall.

That radical approach seems politically unlikely even for a Conservative government that would have turned to the right after an exit decision. But what about Mr. Lilico’s suggestion that the U.K.’s long-term openness would remain about the same?

Whether he is right That would depend on what the U.K. was able to negotiate with the EU and with the rest of the world.

In talks with the EU, there would likely be pressure from German and other manufacturers to keep trade in goods tariff-free. But in services, where the U.K. ran a £20.9-billion surplus with its EU partners last year, no such pressure would exist. European governments might also want to show others that exit is painful—and be willing to take some economic pain to forestall the bloc’s further disintegration. The U.K., anyway, is economically far less important to each of them than the EU is to the U.K.

As for the rest of the world, negotiating free-trade accords usually takes the better part of a decade. The dynamic of trade negotiations means that to get access to another country’s market you have to keep tariffs and other trade barriers in place so you can negotiate them away. If it made enough such deals, the U.K. could eventually have an economy as open as its current one. But getting there would take quite some time.