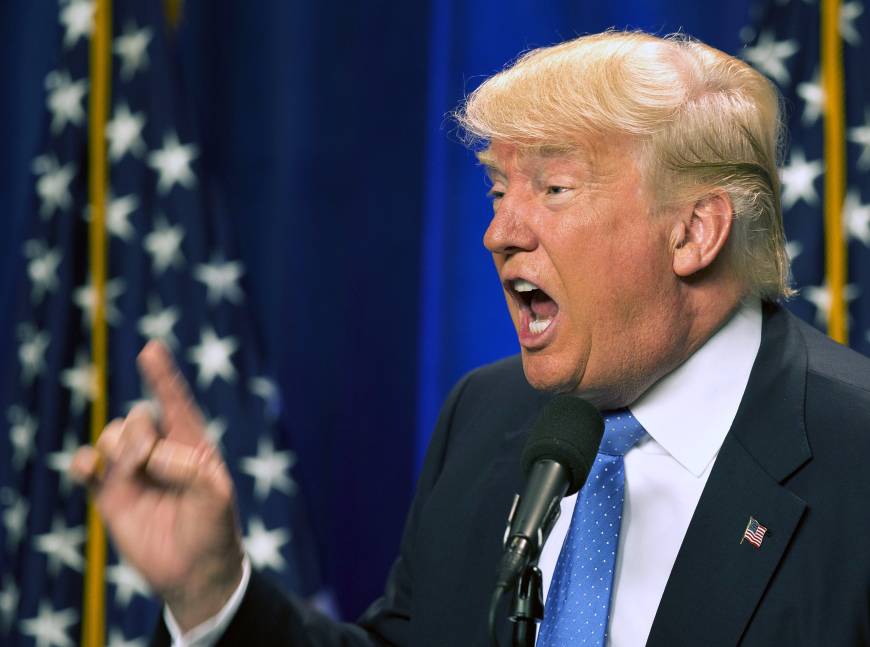 WASHINGTON/NEW YORK – An annotated version of Donald Trump’s speech on combatting terrorism would be heavy with asterisks. The presumptive GOP nominee’s speech Monday painted a picture of a nation overrun by terrorists and with cowed leaders — including the State Department under Hillary Clinton’s leadership — doing little to keep them out. The reality is far more complex.

Clinton, too, spoke Tuesday about how to fight the terrorist issue, but relied on thin data in an implied scold of her GOP opponent.

A look at some of the candidates’ claims:

TRUMP: “The burden is on Hillary Clinton to tell us why she believes immigration from these dangerous countries should be increased without any effective system to really screen. We’re not screening people.”

THE FACTS: Refugees entering the U.S. are subject to rigorous background checks, including a search of government databases that list people suspected of having ties to terrorist groups. Processing of refugees can take anywhere from 18 months to 24 months — and usually longer for those coming from Syria.

Refugees are subject to in-person interviews overseas and are required to provide biographical data about themselves, including their families, friendships, social or political activities, employment, phone numbers, email addresses and other information, along with biometric information, including fingerprints.

The vetting process is led by the Homeland Security Department, with involvement from the State Department and U.S. intelligence and law enforcement agencies.

For all that caution, though, U.S. officials have acknowledged there is a risk the Islamic State group could try to place operatives among refugees. Last year, FBI Director James Comey said data about people coming from Syria may be limited, adding, “If we don’t know much about somebody, there won’t be anything in our database.”

CLINTON: “Inflammatory anti-Muslim rhetoric” and a ban on Muslims entering the country, as Trump has advocated, are counterproductive. “It’s no coincidence that hate crimes against American-Muslims and mosques have tripled after Paris and San Bernardino.”

THE FACTS: There are no official government data available for the period Clinton specified. Her campaign said the statistic came from a December report from the Center for the Study of Hate and Extremism at California State University-San Bernardino, which relied on a single month of U.S. media reports of “anti-Muslim hate crime attacks,” beginning with the Nov. 13, 2015, date of the Paris attacks. It then compared that number with a different data source, the average monthly totals for the prior five years of anti-Muslim hate crimes reported to the FBI.

The study’s author, Cal State-San Bernardino professor Brian Levin, acknowledged limitations to his findings, including comparing disparate data sets. And because he measured only one month, he couldn’t say whether the increase he observed in December persisted until now, as Clinton implied. Levin said reports of hate crimes generally peak in the month after a terror attack and then fall back to something near the average.

TRUMP: “Clinton’s State Department was in charge of admissions and the admissions process for people applying to enter from overseas. Having learned nothing from these attacks, she now plans to massively increase admissions without a screening plan, including a 500 percent increase in Syrian refugees coming into our country.”

THE FACTS: Between Oct. 1 and the end of May, the U.S. resettled about 2,800 Syrian refugees in the United States.

President Barack Obama has pledged to bring 10,000 Syrians into the country this year. Since 2011, 5,763 Syrian refugees have been admitted to the United States. Clinton supports allowing in 65,000 refugees. That would be more than a 500 percent increase. But the vetting process is so lengthy and in-depth that it would likely be difficult to speed up the pace without a major overhaul of the screening process or a big increase in resources.

TRUMP: Hillary Clinton “says the solution is to ban guns. … Her plan is to disarm law-abiding Americans, abolishing the Second Amendment, and leaving only the bad guys and terrorists with guns. She wants to take away Americans’ guns and then admit the very people who want to slaughter us.”

THE FACTS: Trump is overstating Clinton’s gun proposals. She supports a ban on certain military-style weapons, similar to the law President Bill Clinton signed in the 1990s. That ban expired after 10 years and has not been renewed. Clinton also backs an expansion of existing criminal background checks to apply to weapons sales at gun shows. The checks now apply mainly to sales by federally licensed gun dealers.

Federal authorities have said the Orlando shooter legally obtained the weapons he used at the night club. The assault weapons ban barred AR-15 rifles, but the exact model used by Mateen may not have been covered by the ban. The AR-15-style firearm also was used in the mass shootings in San Bernardino, California, and Newtown, Connecticut.

THE FACTS: Federal law is very specific about who is barred from buying a gun. The list of prohibited buyers includes convicted felons, those convicted of a domestic violence offense, fugitives from justice, drug addicts and those who have been judged by a court to be “mentally defective.”

Being investigated by law enforcement does not bar a person from buying a gun. And Mateen was not under investigation when he bought the guns he used.

According to a 2015 analysis by the Government Accountability Office, people on the FBI’s consolidated Terrorist Watchlist successfully passed the background check required to purchase firearms more than 90 percent of the time, with more than 2,043 approvals between 2004 and 2014.

Gun rights advocates argue that placement on such a list doesn’t give people adequate due process to justify revoking their constitutional right to bear arms.

TRUMP: “When I am elected, I will suspend immigration from areas of the world when there is a proven history of terrorism against the United States, Europe or our allies, until we understand how to end these threats.”

THE FACTS: The United States doesn’t ban immigration from anywhere. Anyone with a valid petition can immigrate, and that holds even for the three U.S.-designated state sponsors of terrorism, Iran, Sudan and Syria, although their citizens face extra scrutiny. As of this year, even Europeans who would normally qualify for visa-free travel to the U.S. must first obtain a visa if they hold dual nationalities that include terrorism-sponsor countries or Iraq. The same rule applies if they’ve visited any of these places in the last five years.

TRUMP: “The killer, whose name I will not use, or ever say, was born in Afghan, of Afghan parents, who immigrated to the United States. … A radical Islamic terrorist targeted the nightclub.”

THE FACTS: Trump appeared to trip over his words about Omar Mateen’s birthplace, but it’s an important distinction. Mateen was born in New York, as was Trump. His parents emigrated from Afghanistan before his birth. As for Mateen’s motivation, investigators have not determined why he attacked the Orlando gay nightclub. Mateen’s father has said he did it because of his anti-gay stance. Untangling the shooter’s exact motivations could take time, and investigators may never know exactly what drove him.

Obama and FBI Director James Comey said Monday that Mateen had “strong indications of radicalization,” likely drawing inspiration from foreign terrorist organizations. Mateen also pledged loyalty to the head of the Islamic State group during a 911 call he made during the attack. But investigators say there’s no clear evidence Mateen was actively directed by the Islamic State.

THE FACTS: Trump did not offer specifics, but last year Congress allowed Section 215 of the Patriot Act to expire. That section authorized the National Security Agency to conduct bulk collection of domestic telephone records and allowed the FBI to obtain business records, including hotel bills, travel vouchers and internet data relevant to terror-related investigations.

The program was not regarded as a key tool in thwarting terrorism plots, however. The only case the government said was cracked because of the program over a decade was a relatively minor terrorist financing scheme. Under new law, the government has to request a search of data held by phone companies.

The CIA works to combat international terrorism by collecting, analyzing and disseminating intelligence on foreign terrorist groups and individuals all over the world and often shares information with allies.

Trump meanwhile said on Monday he will no longer issue press credentials to the Washington Post, stopping the publication from gaining access to press areas at his presidential campaign events.

The Washington Post, based in the U.S. capital, is one the country’s most influential newspapers and has one of the largest circulations.

“They have no journalistic integrity and write falsely about Mr. Trump,” his campaign said in a statement explaining the decision. “Mr. Trump does not mind a bad story, but it has to be honest.”

It is unusual for a presidential campaign to refuse to issue credentials to news organizations. Credentials are needed for reporters, photographers and other staff to gain access to press seating, travel with the campaign and attend media-only events, like press conferences.

“Donald Trump’s decision to revoke The Washington Post’s press credentials is nothing less than a repudiation of the role of a free and independent press,” the newspaper’s editor, Marty Baron, said in a statement.

“When coverage doesn’t correspond to what the candidate wants it to be, then a news organization is banished. The Post will continue to cover Donald Trump as it has all along — honorably, honestly, accurately, energetically, and unflinchingly. We’re proud of our coverage, and we’re going to keep at it.”

A source close to the campaign said the ban could be temporary and pointed out that Trump has already barred other new organizations, including Politico, from obtaining press credentials and then reversed course.

Ben Smith, executive editor of Buzzfeed, responded that his news organization, which targets millennials, is also banned from covering official Trump events. The Huffington Post posted on Twitter that its reporters are also barred.

“A candidate for the highest elected office in the land doesn’t get to choose what goes in a newspaper,” said Committee to Protect Journalist Deputy Executive Director Robert Mahoney. “It provides a ready-made excuse for authoritarian leaders to crack down further on independent journalists. We urge Donald Trump to reconsider and let the Washington Post do its job.”

Trump’s campaign took issue with an article that appeared on The Washington Post’s website earlier on Monday with the headline, “Donald Trump suggests President Obama was involved with Orlando shooting’ as their headline.” The headline was changed to “Donald Trump seems to connect President Obama to Orlando shooting” within an hour after it was published.

The Washington Post has assigned a team of reporters to produce a book about Trump that is scheduled to be released later this year.