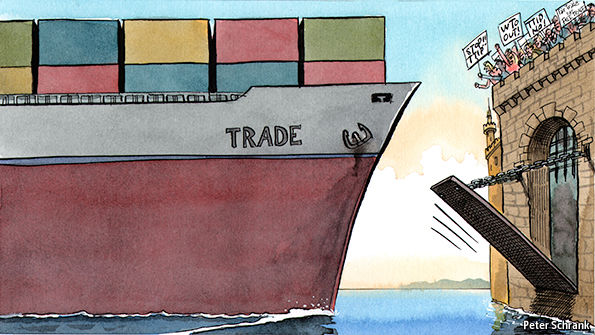 FORGET left and right. These days, it is often said, the real dividing line in politics is between open-door liberals and pull-up-the-drawbridge nationalists. Like most grand claims, this one can be overdone. But the pummelling that international trade is taking on both sides of the Atlantic suggests there is something to it.

Nigel Farage and Marine Le Pen—leaders of right-wing populist parties in, respectively, Britain and France—sound like the far left when they dismiss deals such as the Transatlantic Trade and Investment Partnership (TTIP), a proposed agreement between the European Union and America, as stitch-ups that favour only big corporations. In America, Donald Trump’s pronouncements (“It’s not free trade, it’s stupid trade”) resemble those of Bernie Sanders, the “democratic socialist” who is slowing Hillary Clinton’s path to the Democratic presidential nomination.

Why has trade become the piñata of politics? Partly because it fits the anti-elite mood. Trade deals are cooked up behind closed doors by obscure bureaucrats. Negotiating positions are hidden from voters. The economic changes wrought by technology and competition should perhaps shoulder more of the blame for job insecurity. But it is easier to rail against the hand of a politician who signs a trade deal than the invisible hand of globalisation.

So far, so transatlantic. But there are telling differences between Europe and America. In the EU, opposition to TTIP is at its sharpest in Germany and Austria, two export powerhouses with low unemployment. The thousands of protesters who rallied in Hanover last weekend, as Barack Obama rolled into town to instil energy into the flagging talks, or the Dutch campaigners gathering signatures to put TTIP to a referendum, fulminate not against lost jobs but greedy multinationals and the lower food and environmental standards they believe the deal will bring.

But in America the anti-trade message resonates most in post-industrial regions that lost out from NAFTA, a trade deal struck in the 1990s with Canada and Mexico, as well as the accession of China to the World Trade Organisation in 2001. This led to huge job losses as American firms struggled to compete with cheap imports. In his Hanover speech Mr Obama acknowledged that governments must do more for globalisation’s losers.

Why the difference? Pascal Lamy, who served as the EU’s trade commissioner before running the WTO from 2005 to 2013, distinguishes between the “old” and “new” worlds of trade deals. The old world, dominated by national producers, was about opening markets and cutting tariffs. The new one aims to reduce differences between sets of national or regional rules that hinder trade in a world of transnational production and long supply chains. In the old world, trade negotiators battled producers who sought protection from international competition. In the new, officials must contend with consumers who fear that the domestic standards they cherish will be watered down.

Ironically, it is the Old World that is grappling with these fresh challenges first. For now, America’s gaze remains fixed on a not-yet-ratified Asian trade deal, and the fears of a new flood of cheap imports. The controversy over TTIP in Europe, by contrast, is about standard-setting and regulatory co-operation. To that extent the protesters have understood its significance better than the European Commission, which is negotiating the deal with America, or the EU governments that sought it in the first place. The politicians’ attempts to sell TTIP were hopeless from the start; many thought a deal with an advanced economy would be free of rows about labour standards. But the economic gains are highly uncertain, given the difficulty of modelling such a complex “new-world” deal. Transparency concerns were ignored. All this allowed TTIP’s opponents to build up their own narrative, one often untroubled by factual accuracy.

EU officials say the protests have sharpened their minds. As America does with the Asian deal, the commission now emphasises the strategic value of TTIP in setting standards that much of the rest of the world will be obliged to follow. It has also tried to channel public concern into the negotiations. After an outcry over a provision in TTIP that would allow investors to sue governments, for example, the commission issued a revised proposal. The Americans remain sceptical.

Such delicate manoeuvring is best done by elected politicians. But while Angela Merkel, David Cameron and Matteo Renzi all profess support for TTIP, none has invested much energy in convincing voters. In Austria leaders compete to see who can sound most opposed. In Britain, free-traders on either side of the June Brexit referendum are distracted by an argument over who could best reach a deal with America. All have left the hard work of selling this innovative deal to the bureaucrats of the commission. But without political authority, they struggle to do any more than engage in endless (and fruitless) “mythbusting”.

Protesters may yet have their way. The TTIP talks are floundering on issues such as public procurement, services and agricultural markets. A breakthrough during a 13th round of talks in New York, held as The Economist went to press, looked unlikely. Both sides say the trickiest elements will be left for a final bout of horse-trading in the autumn. But it is hard to see a meaningful deal concluded by the end of the year, the current target. Delay would mean a new American president, a new Congress, a new trade negotiator and quite possibly a new set of priorities. French and German elections next year could also cause trouble. TTIP may have to wait until 2018 or later for ratification.

That would be a pity. The deal would provide a boost to Europe’s morose economy. And it would help reassure those who worry that the transatlantic bond is fraying. Right now the EU could do with some good news. The terrain of new worlds demands skilled navigators. But they are nowhere to be seen.