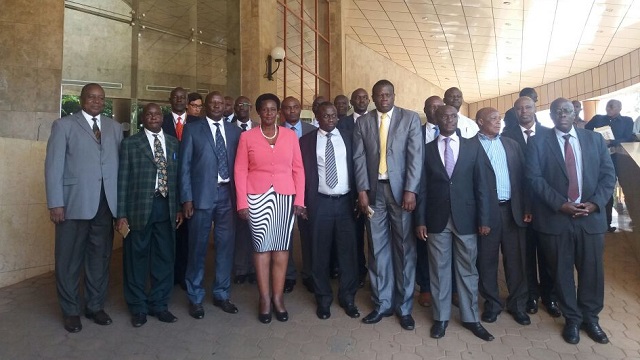 Minister Kyambadde and officials of the Ministry of Trade at a sector conference on Tuesday. PHOTO Godfrey Ssali

The Minister of Trade, Industry and Cooperatives Amelia Kyambadde has launched the Leather and Leather Products Policy that aims to improve quality of exports and processing of hides and skins in the country.

The policy passed by Uganda’s cabinet recently, aims to maximize value addition in the leather sector and application of cleaner technologies. The policy targets 0% export of raw hides and skins, 25% of semi-finished leather processed into finished leather products for domestic consumption and export.

” The exportation of raw hides and skins is meant to support the local leather industries in the region, which depend on these raw materials to manufacture finished products,” Kyambadde said.

Kyambadde was officiating at the 7th Annual Sector Review Conference of the Ministry of Trade, Industry and Cooperatives in Kampala where she highlighted a number of achievements including adoption of modern trade protocols and robust development of Small and Medium Enterprises.

Kyambadde decried inadequate budget allocations as a major constraint in the sector’s performance.

She revealed that the COMESA region was still Uganda’s main export destination during the past year. The EU market ranked the second highest destination for Uganda’s products followed by the Middle East bloc, Asia, the Rest of Africa, the Rest of Europe and the Americas respectively.

At the conference Kyambadde highlight the achievements of the TIC Sector for the Financial Year 2015/16, the planned key activities for FY 2016/17.

She launched six policies and strategies: