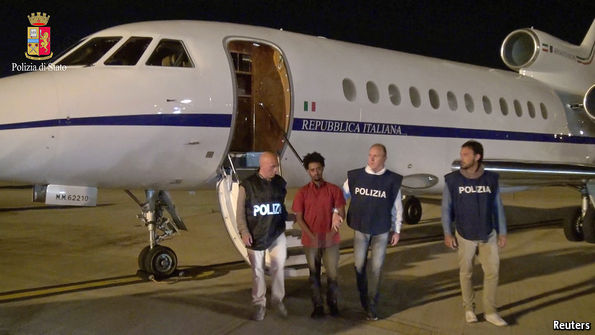 WHAT’S in a name? For an Eritrean man hauled before a judge in Palermo, Sicily, on June 10th, the answer could be many years in an Italian jail. If, as he claims, he is Medhanie Tesfamariam Berhe, he is a refugee and a victim of mistaken identity. But if, as the prosecution maintains, he is Medhanie Yehdego Mered, then—according to British and Italian investigators—he is a ruthless criminal, one of the masterminds behind the best-organised route funnelling migrants from Africa to Europe. Britain’s National Crime Agency (NCA) said it had tracked him to the Sudanese capital, Khartoum, where he was arrested on May 24th.

Mr Mered (or Mr Berhe) was extradited to Italy and jailed. Prosecutors in Sicily, who first identified Mr Mered as a key figure in the migrant-smuggling business, want him tried on charges of running an operation in 2013 that ended in the deaths of 359 people, when a boat capsized off the Italian island of Lampedusa. Yet defence witnesses say the jailed man fled Eritrea for Sudan in the hope of joining relatives in Europe or America. The defendant’s counsel has asked the court for a scientific comparison of his client’s voice with that of Mr Mered, who was wiretapped by Italian police in 2014.

The arrest of migrant-smugglers is not unusual. According to the Italian interior ministry, more than 500 were taken into custody in each of the past two years, having been discovered escorting irregular migrants across the Mediterranean. But those detained were minor players in an illegal business with an annual turnover which the European border agency, Frontex, puts at €4 billion ($4.5 billion).

The real challenge has long been to disrupt the organisers. That is what makes the case in Palermo so important: it is either a farce, or the most important breakthrough so far in the war on migrant-smuggling.

The difficulties of bringing a people-smuggling kingpin to book are immense. Peter Roberts of the Royal United Services Institute, a think-tank, has studied the smugglers’ methods. He says their networks involve up to 25 layers of intermediaries and facilitators, among them an ever-changing cast of lorry drivers, travel agents, money changers, people with access to safe houses and fishermen, along with bribeable officials, soldiers and police officers. In Libya they also involve the warring militias through whose territory the migrants pass. Identifying individuals is difficult. “You have to be on the ground, and there are going to be a lot of dead ends,” says Mr Roberts.

In recent years almost all the migrants reaching Italy have set off from the Libyan coast. Some, notably Bangladeshis, came to work in Libya but decided that the risk of staying in a country that has descended into anarchy was greater than that of crossing the Mediterranean in a fragile boat. According to Frontex, the others—asylum-seekers and economic migrants—arrived from east Africa via Sudan, or from west Africa through Niger.

The transit areas include violent places where a Western investigator would be dangerously conspicuous and where officials are often in the pay of the smugglers. One theory about the latest operation is that Sudanese officials might have pointed investigators to the wrong man. Against this background, and given that terrorism has been a higher priority for many European police forces and intelligence agencies, it is easy to understand why the war on migrant-smugglers has so far yielded modest results.

The operation against Mr Mered shows that could now be changing. “For the first time, they are using the tools they have,” says Kristina Touzenis of the International Organisation for Migration. Chief among these is the UN Convention against Transnational Organised Crime, which came into force in 2003. It allows states to prosecute activities that took place abroad, but were carried out with a view to committing a crime on their territory. And while unauthorised immigration is not a criminal offence in most countries, facilitating it for gain is.

The involvement of the NCA suggests Britain has moved the investigation of migrant smuggling up its agenda. The same may be true of France, which is concerned about links between the trade in human beings, terrorist funding and arms trafficking. Yet experts say much still needs to be done. No one European agency is responsible for fighting the people-smugglers. That might be worth changing.