Their frustration is directed at the European Investment Bank, a public lender tasked with attracting private money to help finance construction projects like London’s transport network or a giant lock in a Belgian harbor. The bank, owned by European Union governments, provides guarantees and junior debt to make investment less risky, which is great for private investors. But the EIB has another role — keeping financing costs affordable for taxpayers — and that’s where public and private interests start to clash.

“Some of the infrastructure financing by the European Investment Bank has been allocated to projects that already received a lot of interest from private investors,” Holger Kerzel, head of equity portfolio management at MEAG, Munich Re’s asset-management arm, said in an interview. “The EIB crowded out private investors instead of supporting them.”

Such complaints have become a refrain among institutional investors even as the need for more spending grows. A survey by an industry group on Monday identified “a serious lack” of suitable investment opportunities and said the EIB in some cases was competing with private investors. MEAG, which oversees 268 billion euros ($278 billion) for the world’s biggest reinsurer, is targeting 8 billion euros of investments in infrastructure, including renewable energy. So far it has deployed just 2.5 billion euros. 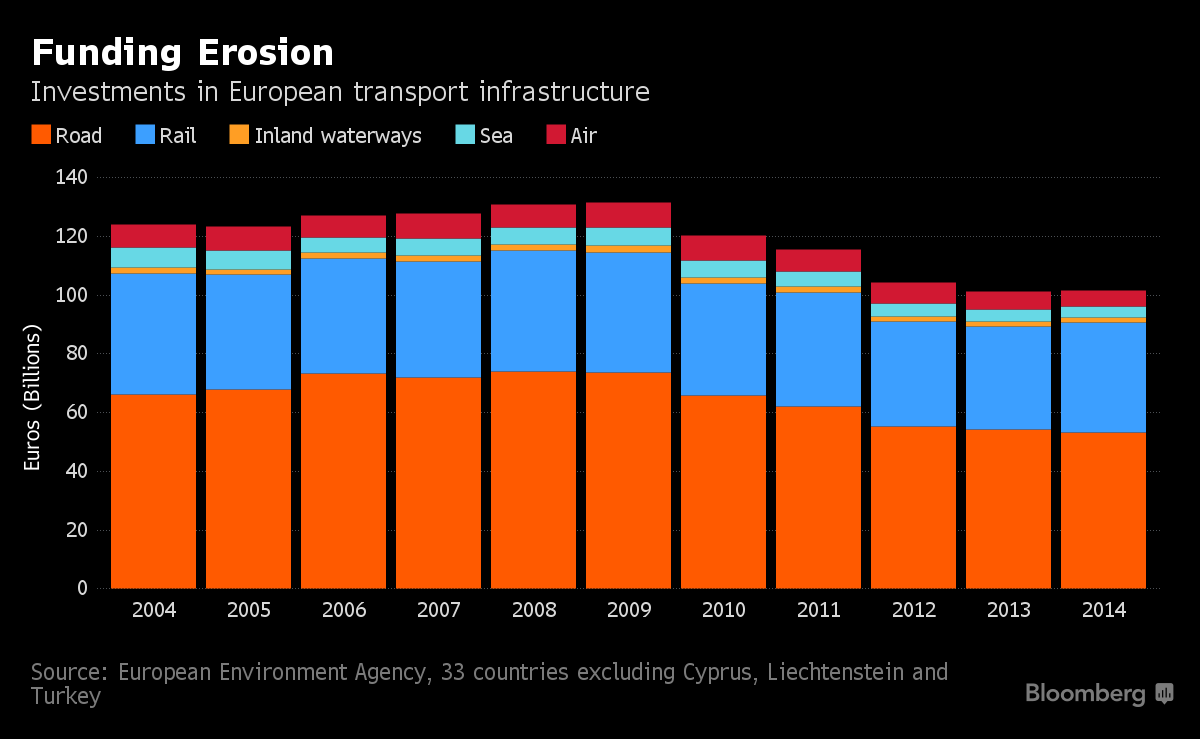 It’s not the first time investors complain about obstacles to infrastructure. Regulators relaxed capital charges for such deals under Solvency II rules introduced in the EU this year after investors complained the requirements were hindering investment.

“Insurers and pensions are awash with money and in a bind to invest that for a meaningful yield,” said Wolfgang Schaefers, a professor of real estate management at the Regensburg University in Germany. “It’s a showcase for their distress if they publicly clash with a government institution like the EIB.”

Insurers and pension funds, which oversee more than 16 trillion euros in investments in Europe, say their money is needed to repair aging highways, bridges and power grids around the world. In the U.S., President-elect Donald Trump has pledged $1 trillion in construction financed mainly by the private sector.

But the call for more private involvement comes with a concern that investors will get the better of taxpayers if left unchecked. German state governments this month thwarted a proposal by Finance Minister Wolfgang Schaeuble to allow insurers to buy into a new state company to manage federal roadways, which include the 13,000-kilometer (8,100-mile) network of autobahns that Germans treasure for its lack of a general speed limit.

“There is always a risk that private infrastructure financing is skewed at the expense of the taxpayer or the user and toll payer,” said Clemens Fuest, president of the Munich-based Ifo economic institute. “In this respect, it is sensible for the EIB to compete in project financing.”

Generally, the EIB finances about a third of each project but its contribution can be as much as 50 percent. Last year the bank handed out 77.5 billion euros in loans. They include 1 billion pounds ($1.23 billion) to upgrade London’s transport network, financing that investors say deprived the private sector of a bigger role in the project.

Belgium’s Kieldrecht lock, which opened in June, is another sore spot with insurers and pension funds. The development bank provided 160.5 million euros, about half the cost, for the construction in the port of Antwerp.

The bank has a duty to keep funding costs affordable for taxpayers, Matthias Woitok, the EIB’s head of structured finance for much of Europe, said in an interview.

“We do not seek to finance projects alone and will not fund all of the costs of a project,” he said. “Instead we actively seek to partner with private investors.”

“However, we also have seen the EIB crowding out private investors in projects which could have been fully financed by private investors,” he said. “This obviously is not the function of the EIB and burns taxpayers’ money.”

Insurers and pension funds used to rely on government and covered bonds to help them meet their future obligations to policyholders. Those yields have bottomed out during years of central bank easy-money programs, which, combined with increasing life expectations, has left pension managers from Europe to Japan facing a growing shortfall in funds to cover payouts to future retirees.

Several large European insurers have publicly committed to increasing their infrastructure investments by a total of around 50 billion euros in coming years, according to the Insurance Europe industry trade association. A survey of the industry conducted by the lobby group identified “several cases across the EU where insurers were crowded out by the involvement of the European Investment Bank.”

Talanx AG, Germany’s third-biggest insurer with about 1.4 billion euros in infrastructure, said it appreciates the EIB’s expertise in the structuring and monitoring of complex transactions. But there should be a clearer line between investments the EIB does and those that private investors target, according to Thomas Mann, management board member of Talanx Asset Management.

“We regard classic infrastructure projects with manageable risks, such as projects in Germany, more as the very own playing field of commercial investors,” Mann said.