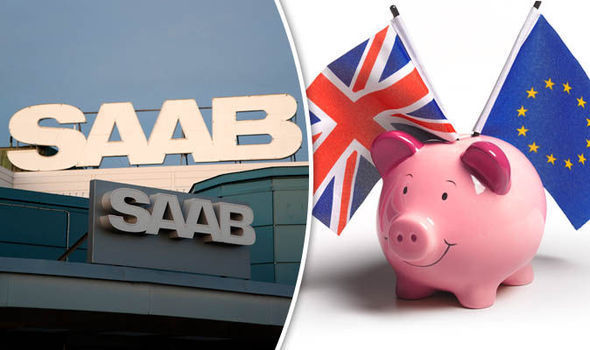 A top boss hailed Brexit as a “net positive” for the firm which hopes to boost jobs and sales here.

And he signalled that Saab, which has global annual sales of £2.4 billion in more than 100 countries, could benefit from new UK trade deals with states outside the EU.

Mr Walton, a former deputy chief of Joint Operations at the MoD, said: “Regarding Brexit, we judge the change to be a net positive for Saab.

“We will continue to export from Sweden to the EU. That will be unchanged. But we will expand our operations in the UK.

“The British Government has always been a strong supporter of defence exports and we do not see that changing.

“David Cameron put a lot of people on a plane and flew around the world drumming up business. We want to be on the plane. The situation is just right for us.”

Saab, whose products range from the Gripen fighter to radar to naval torpedoes to air traffic control, employs 200 in the UK.

But 33 per cent of the Gripen’s parts are made in the UK, supporting 600 firms.

And an independent study predicted that over the next 10 years sales of the Gripen could support up to 6,000 UK jobs.

Mr Walton said: “We seek to partner with the UK wherever we can, with companies or the Government, to develop new products.

“We always seek to use indigenous capabilities in any customer country and the UK is no exception.

“It is an honour to be able to sell into this market and to support the Armed Forces and the civilian services.

“We absolutely intend to continue doing that. As part of our global growth we intend to grow in the UK.

“It is such a good market. It is the ability to export from the UK with strong Government support.”