The Spectator is the oldest continuously published magazine in the English language — having been established in 1828. An intellectual powerhouse of conservative opinion, it is hugely respected on both the Right and Left. This is its editorial ahead of Thursday’s vote…

The Spectator has a long record of being isolated, but right. We argued for the decriminalisation of homosexuality a decade before it happened and were denounced as the ‘bugger’s bugle’ for our troubles.

We alone supported Margaret Thatcher when she first stood for the Tory leadership. 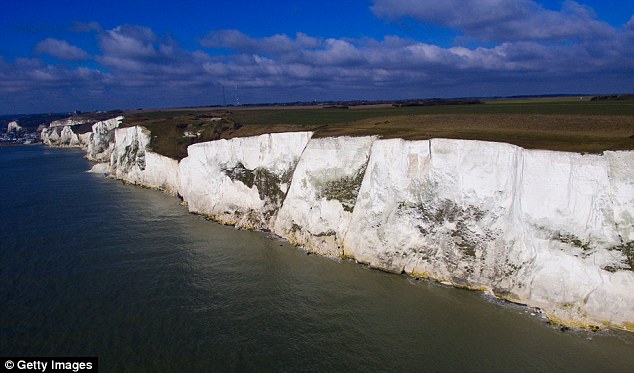 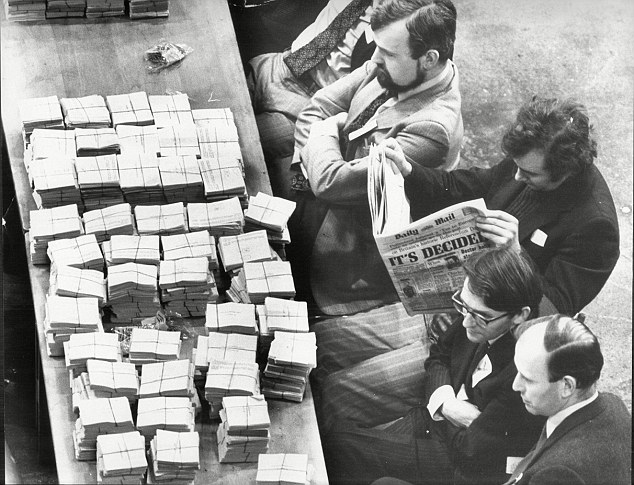 When Britain last held a referendum in 1975, every newspaper in the land advocated a ‘Yes’ vote. Only two national titles backed what is now called Brexit: the Morning Star and The Spectator. Pictured: The 1975 count

And when Britain last held a referendum on Europe, every newspaper in the land advocated a ‘Yes’ vote. Only two national titles backed what is now called Brexit: the Morning Star and The Spectator.

Our concern then was simple: we did not believe that the Common Market was just about trade. We felt it would be followed by an attempted common government, which would have disastrous effects on a continent distinguished by its glorious diversity.

The whole project seemed to be a protectionist scam, an attempt to try to build a wall around the continent rather than embrace world trade.

Such European parochialism, we argued, did not suit a globally minded country such as Britain. On the week of the 1975 referendum, The Spectator’s cover line was: ‘Out — and into the world.’

We repeat that line today.

Since 1975, the EU has mutated in exactly the way we then feared and now resembles nothing so much as the Habsburg Empire in its dying days. A bloated bureaucracy that has outgrown all usefulness. A parliament that represents many nations, but with no democratic legitimacy. Countries on its periphery pitched into poverty, or agitating for secession.

The EU’s hunger for power has been matched only by its incompetence. The European Union is making the people of our continent poorer, and less free.

This goes far beyond frustration at diktats on banana curvature. The EU has started to deform our government.

Michael Gove revealed how, as a Cabinet member, he regularly finds himself having to process edicts, rules and regulations that have been framed at European level. Laws that no one in Britain had asked for, and which no one elected to the House of Commons has the power to change. 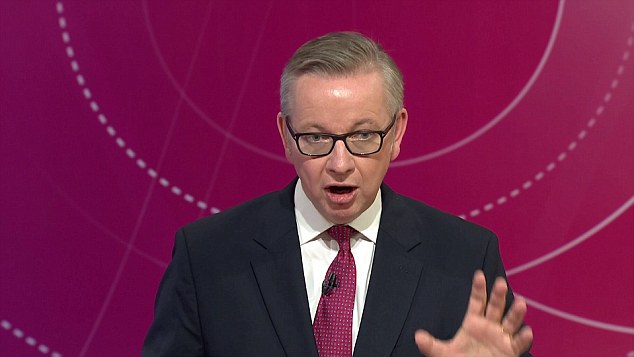 Leave campaigner Michael Gove says he regularly finds himself having to process edicts, rules and regulations that have been framed at European level – laws no one in Britain has asked for

What we refer to as British government is increasingly no such thing. It involves the passing of laws written by people whom no one in Britain elected, no one can name and no one can remove.

Steve Hilton, David Cameron’s chief strategist for many years, gave an example of this institutional decay.

A few months into his job in No 10, he was dismayed to find his colleagues making slow progress because they were all bogged down by paperwork that he didn’t recognise. He asked for an audit, and was shocked by the results: only a third of what the Government was doing was related to its agenda. Just over half was processing orders from Brussels.

To him, this was more than just a headache: it was an insidious and accelerating bureaucratic takeover.

With the EU’s fundamental lack of democracy comes complacency on the part of its leaders and the corruption of those around them — which has led us to the present situation. Voters are naturally concerned about the extraordinary rise of immigration, and their governments’ inability to control it.

Free movement of people might have been a laudable goal before the turn of the century, when the current global wave of migration started. But today, with the world on the move, the system strikes a great many Europeans as madness.

The EU’s failure to handle immigration has encouraged the people-trafficking industry, a global evil that has led to almost 3,000 deaths in the Mediterranean so far this year. In theory, the EU is supposed to protect its member states by insisting refugees claim asylum in the first country they enter.

In practice, this law — the Dublin Convention — was torn up by Angela Merkel when she recklessly said that all Syrians could settle in Germany if they somehow managed to get there. 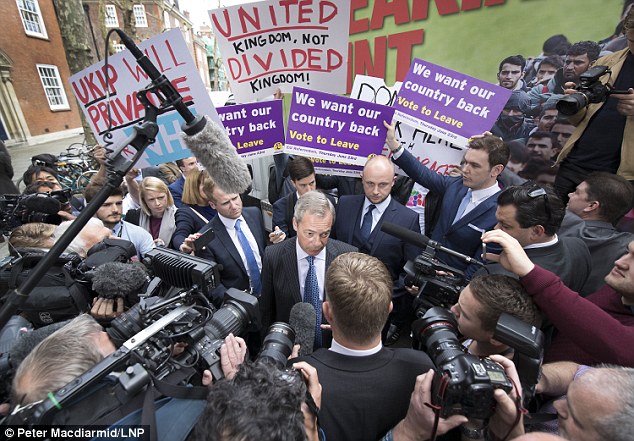 The EU’s failure to handle immigration has encouraged the people-trafficking industry, a global evil that has led to almost 3,000 deaths in the Mediterranean so far this year. Pictured: Nigel Farage launching a new EU Referendum poster featuring a picture of migrants queueing at a border crossing

Blame lies not with the tens of thousands who subsequently arrived, but with a system hopelessly unequal to such a complex, intensifying challenge.

The Spectator was, again, alone in the British Press in opposing Britain’s entry to the Exchange Rate Mechanism from the beginning. Why, we asked, should the Bundesbank control another country’s interest rates?

When the single currency came along, the risks became greater: what if a country’s economy crashed, but it was denied the stimulus of a devaluing currency?

The answer can now be seen across Europe. Sado-austerity in Italy. Youth unemployment of around 50 per cent in Greece and Spain. The evisceration of these economies, in the name of a project supposed to bring people together, has been a tragedy. Last week, a Pew poll showed how far dismay about the EU extends across the Continent.

In Greece, 71 per cent now view the EU unfavourably; in France, it’s 61 per cent. In Britain, it was 48 per cent — about the same as Spain, Germany and the Netherlands. 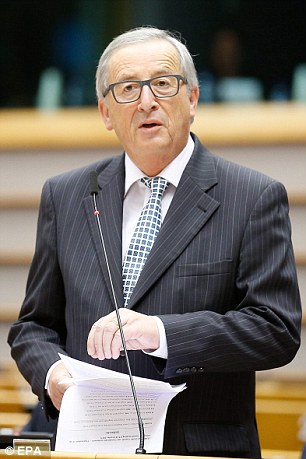 Jean-Claude Juncker, the unelected president of the European Commission, has prioritised is the survival of the EU and the single currency

This was why David Cameron had a strong case for renegotiation: the demand for change was widespread, and growing. A recent poll has suggested that Swedes will vote to leave the EU if Britain does. The absence of a deal worth the name was final proof that the EU is structurally incapable of reform.

Jean-Claude Juncker, the unelected president of the European Commission, sees intransigence as a great strength. His priority is the survival of the EU and the single currency: the welfare of Europeans and even the notion of democratic consent seem distant concerns.

When he dismisses the ever-louder voices of protest as the shriek of ‘populism’, he echoes the Bertolt Brecht poem: ‘Would it not be easier . . . to dissolve the people and elect another?’ When Britain asked for reform, he took a gamble: that we were bluffing and would not dare to leave. All this has placed the Prime Minister in an impossible position. Unable to make a positive case for staying in the EU, he instead tells us that Britain is trapped within it and that the penalties for leaving are too severe.

His scare stories, peppered with made-up statistics, have underlined the emptiness of the case for remaining. It also represents a style of politics that many find repugnant.

Warnings from the IMF, OECD and other acronyms have served only to reinforce the caricature of a globalised elite telling the governed what to think.

Talk of anyone being made ‘worse off’ by Brexit is deeply misleading. Of the many economists who have made projections for 2030, none have suggested that we’d be poorer.

So these studies offer no real reasons to be fearful. This is perhaps why George Osborne had to resort to concocting figures, such as his now notorious claim that households would be £4,300 worse off. If the economic case against Brexit were so strong, why would the Chancellor have to resort to fabrications?

As the world’s fifth-largest economy, Britain has a reasonable chance (to put it mildly) of being able to cut trade deals with countries keen to access our consumers.

The worst-case scenario is to use World Trade Organisation rules, tariffs of about 4 per cent. That’s a relatively small mark-up, and the effect would be more than offset by a welcome drop in the pound.

And if house prices fall, as the Chancellor predicts, so much the better. A great many would-be homeowners have been praying for just that. 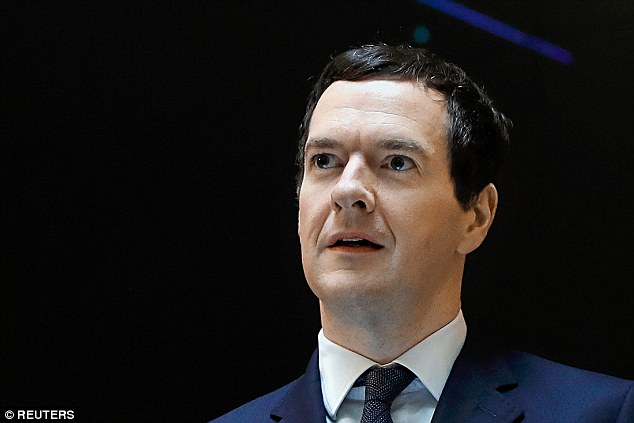 There would certainly be turbulence, which would be the price of our leaving the EU. This would affect City financiers more than the skilled working class (two-thirds of whom support Brexit).

This week, we’re being invited to panic at the prospect of a falling pound. But why? A weaker currency would give our exporters the stimulus they need.

The question at this referendum is not whether Britain should co-operate with our European allies — the question is how.

Sir Richard Dearlove, former head of MI6, has explained how our intelligence alliances are bilateral. Our closest is with the ‘five eyes’ of the U.S., Australia, Canada and New Zealand. The Lancaster House treaties with France over military co-operation are another example.

Alliances work when they are between nations with a shared agenda, with the ability and (crucially) the will to act.

The EU is an alliance of the unwilling, which is why it is useless on security — as we saw with Bosnia and Libya.

Even the migrant crisis has to be handled by Nato, which has been the true guarantor of Western security.

It’s sometimes claimed that Vladimir Putin would want Britain to vote for Brexit. This is unlikely: what could suit the Kremlin more than European security being entrusted to the most dysfunctional organisation in the West?

As David Cameron rightly says, the British way is to fight, rather than quit. Given the EU has proved that it is structurally incapable of reform, we now have a choice.

Do we cave in because we’re too scared to leave? Or do we vote to retrieve our sovereignty, walk away from the whole racket and engage with the world on our own terms? 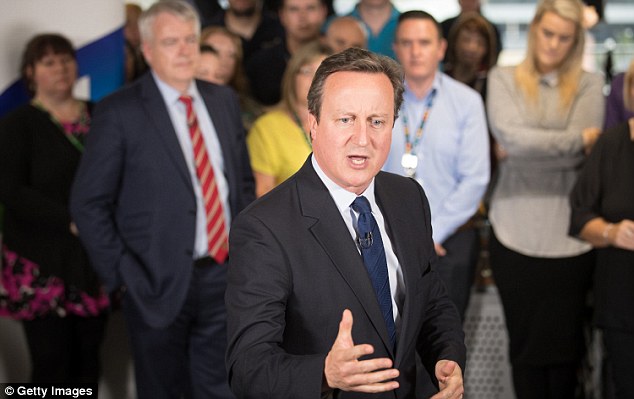 As David Cameron rightly says, the British way is to fight, rather than quit. Given the EU has proved that it is structurally incapable of reform, we now have a choice, writes The Spectator

A vote to leave would represent an extraordinary vote of confidence in the project of the United Kingdom and the principle of national self-determination. It would also show reform-minded Europeans that theirs is not a lost cause. And that we stand willing to help forge a Europe based on freedom, co-operation and sovereignty.

The value of sovereignty cannot be measured by any economist’s formula.

Adam Smith, the father of economics, first observed that the prosperity of a country is decided by whether it keeps its ‘laws and institutions’ healthy. This basic insight explains why nations thrive or fail, and has been the great secret of British success: intellectual, artistic, scientific and industrial.

The principles of the Magna Carta and achievements of the Glorious Revolution led to our emergence as a world power. To pass up the chance to stop our laws being over-ridden by Luxembourg and our democracy eroded by Brussels would be a derogation of duty to this generation and the next.

No one — economist, politician or mystic — knows what tumult we can expect in the next 15 years. But we do know that, whatever happens, Britain will be better able to respond and adapt as a sovereign country living under its own laws.

The history of the past two centuries can be summed up in two words: democracy matters.