The Financial Plan for a ‘Brexit’? Cross Your Fingers

Like local responders readying sandbags as a hurricane menaces their shores, financial industry overseers have been quietly drawing up contingency plans while surveying the expensive havoc a so-called Brexit is already wreaking. Central bankers from London to Washington have been monitoring the tempest while making preparations to unleash credit should markets seize with fear.

The conversation is now focused on managing the risks of Brexit. The trouble is that the worries are so diffuse and rife with unknowns that any attack plan amounts to an exercise in guesswork and hope. Executives, bankers and bureaucrats are grappling with something that could be minor or momentous and has never happened before.

Maybe the Brexit — for British exit — would merely lop value from the pound before traders turned their attention to a more consequential plot twist elsewhere. Perhaps it would inspire separatist movements from Scotland to Spain, embolden anti-trade populists across the Continent and reinvigorate existential questions gnawing at the common euro currency. That could sow fear across world markets.

A Brexit might spook investors into entrusting their money only to the safest repositories like American Treasuries. That could strengthen the American dollar and weaken American exports, while starving riskier emerging markets of investment.

Whatever stories policy makers and businesspeople tell themselves, the only certainty is a surplus of uncertainty. Whatever provisional plans they sketch, they will find themselves mostly just wishing that nothing terrible happens.

If you run a central bank, water comes in the form of liquidity. Most experts assume the Bank of England and its counterparts have readied plans to lend to financial institutions that could face cash shortages. In recent days, European Central Bank officials have signaled readiness to inject money into the financial sphere. In a speech last week, the Federal Reserve chairwoman, Janet L. Yellen, warned that a Brexit could have “significant economic repercussions.”

Much of the business world once shrugged off the Brexit vote as noisy political theater that would eventually be muted by economic common sense. But recent polls have showed the “leave” camp slightly ahead.

According to Laurence Wormald, head of research at FIS, which provides technology and market intelligence to financial services companies, British stocks would most likely fall 15 percent after a Brexit, with the pound dropping by a similar proportion.

The most nettlesome variable may be trade. Britain sells nearly half its exports within the European Union. Multinational corporations have set up headquarters in Britain, using those bases to serve customers across the Continent. 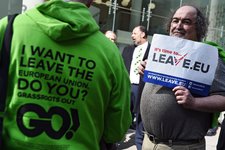 Interactive Feature | Explaining ‘Brexit,’ Britain’s Vote on European Union Membership Britain will hold a referendum on June 23 on whether to leave the European Union, a decision nicknamed “Brexit.”

But if Britain failed to secure a deal, commerce with Europe could be governed by the terms of the World Trade Organization, which gives member nations the authority to impose potentially steep tariffs on imports.

The debate over the Brexit is full of references to sundry alternative models. Norway enjoys access to the European market although it remains outside the union. Switzerland has achieved similar status through a thicket of treaties. But in both cases, they must accept something supporters of Brexit want to eliminate — European rules that allow people to move liberally from country to country.

If Britain dumps Europe, “they are not going to say, ‘Well, O.K., here’s a good deal,’” said Paul Johnson, director of the Institute for Fiscal Studies, an independent research institution in London.

Jamie Dimon, chief executive of JPMorgan Chase, recently visited Britain with a pointed warning. “If the U.K. leaves the E.U., we may have no choice but to reorganize our business model here,” he said. “Brexit could mean fewer JPMorgan jobs in the U.K. and more jobs in Europe.” Citigroup offered a similar caution.

If the sun rises on June 24 with Britain on its way out, such a shift could happen sooner rather than later. At a time of crippling uncertainty, banks would feel a compulsion to at least eliminate variables by quickly announcing their plans, moving people within the European Union — to Amsterdam, Dublin, Frankfurt and Paris.