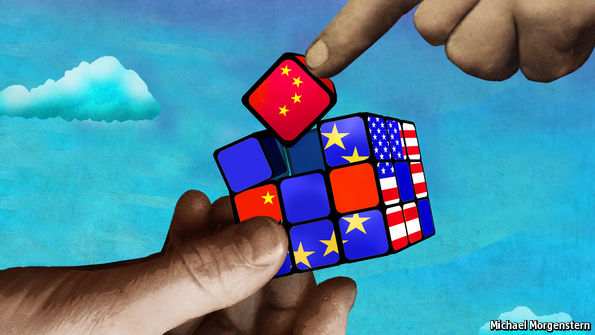 FOR China’s leaders it is as if, having signed a postdated cheque in their country’s favour, Western countries are threatening not to honour it. Their excuses—that the cheque was only ever provisional, that their domestic politics make it impossible and that times have changed anyway—serve only to confirm the impression of defaulters wriggling off the hook. So when, as seems likely, not all the world’s big economies grant China “market-economy status” by the 15th anniversary of its accession to the World Trade Organisation in late 2001, China will cry foul and an almighty row will ensue. China will probably take the dispute to the WTO for settlement. This does not mean it is in the right.

China argues that geopolitical and domestic economic considerations are clouding a clear legal obligation. It may also sense an opportunity: to divide the China policies of the West’s two most important components, America and the European Union. More than a decade ago, it gave up hope that it might persuade the EU to lift the embargo on arms sales to China imposed after the Tiananmen killings of 1989. American disapproval put the kibosh on that. Now, however, it may, to American dismay, win “market” status unilaterally from Europe.

At issue is the interpretation of China’s accession agreement to the WTO. Article 15 allows countries to treat China as a “non-market economy” when weighing accusations that it is dumping products abroad—ie, exporting at an unfairly low price. When an alleged dumping country has market status, complaining countries have to compare its export prices with those in its domestic market. For China and other non-market economies, they are allowed to use other similar countries as comparison.

This matters. No country is accused as often as China of dumping (it is the current target of 28 out of 38 anti-dumping investigations by the European Commission). And WTO rules allow members to impose hefty punitive tariffs on dumped products. However, Article 15 provides that if Chinese producers can prove that market conditions prevail in their industry, then the importing country has to use Chinese prices as a comparison. And, it goes on, “in any event” the non-market presumption will expire 15 years after China’s accession—ie, on December 11th 2016.

It amounts, says China, to a guarantee of market status by that date. That is not, however, what the agreement says. Rather, it says that importing countries will lose the right automatically to treat China as a non-market economy for anti-dumping purposes. That is not the same as according it full market status under their domestic laws. China does not enjoy market status in the EU, America or Japan, the world’s three biggest economies not counting itself, nor in other giants such as Canada, India and Mexico. A lot is hanging on the interpretation of Article 15.

When China joined the WTO all those years ago, it appeared bound on a course of market-oriented reform. So the present debate was not foreseen. Yet later, in 2008, a European Commission assessment deemed China to have failed to meet four out of five criteria that the EU sets for winning market status. Since then, despite the Communist Party’s decision in 2013 to let market forces play a “decisive” role, and despite the continued growth of the private sector in China, there has been no fundamental transformation of its economic structure. In 2014 a body set up by America’s Congress to monitor the security implications of economic relations with China noted that many witnesses had told it that “China is not currently a market economy and is not on the path to become one in the near future.”

China is of course right, however, that more than purely legal factors will sway other countries’ decisions. In 2001 China accounted for 4.4% of global merchandise exports. By 2015 the proportion had tripled. As China’s economic clout has grown, so has fear about its impact on jobs elsewhere. In this respect, it is unfortunate for China that the debate is coming to a head at a time of panic in an industry China dominates: steel.

Last year China produced 803m tonnes—50.3% of the global total—and exported 112m tonnes. The world’s second-biggest producer was the EU, with 166m tonnes. Even if China carries out its declared plans to close a lot of steel mills, at the cost of hundreds of thousands of Chinese jobs, it will still have annual excess capacity of 200m tonnes or more. This is great for steel consumers, but threatens the jobs of steelworkers, of whom there are 328,000 in the EU alone. What is more, the closure of steel plants provokes atavistic fears about whether Western manufacturing has a future. To many Europeans and Americans, even national identity may seem to be at stake.

On both sides of the Atlantic, anti-China diatribes are becoming more common. Britain’s Conservative government is accused of sacrificing the steel industry to toady up to China. In America Donald Trump, who accuses China of “raping” America and wants to impose a 45% tariff on Chinese imports, is now the all-but-certain Republican presidential nominee.

It seems unlikely, in this climate, that America will change its laws to grant market-economy status to China. In Europe the decision is harder to call. Britain, the Netherlands and the Nordic countries are likely to be in favour, with some Mediterranean countries, notably Italy, against. In the end, some in Washington fear, Europeans may be tempted to give China what it wants for the sake of commercial advantage and to avoid a quarrel.

If so, that would recall the tussle over the arms embargo. It would also be in keeping with Europe’s role as a distant, detached observer of the geopolitical tussle under way between China and America for strategic primacy in Asia. So the worst outcome of an obscure wrangle over China’s status in the WTO may not be a blazing row with China so much as the widening of an already worrying rift in the transatlantic alliance.