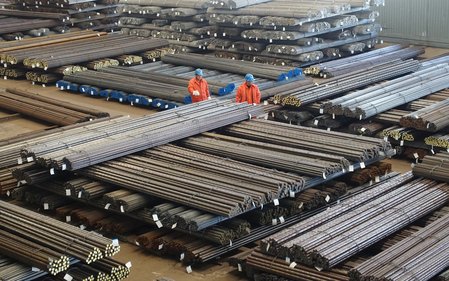 Blaming China for woes in the global steel industry is simply a lazy excuse for protectionism, and such finger-pointing will be counter-productive, China’s official Xinhua news agency said in a commentary on Monday.The issue has shot to the top of the political agenda in a number of countries.India’s Tata Steel has blamed a flood of cheap steel imports, including from China, for a decision to pull out of Britain, putting 15,000 jobs at risk.Last week, more than 40,000 German steel workers took to the streets to protest against dumping from China, among other issues such as industry consolidation that they fear will cost them their jobs.Xinhua, in an English-language piece, said it appeared “understandable” to think that China as the world’s largest steel producer and consumer was the cause of the problems.“Upon closer inspection, however, it’s just a lame and lazy excuse for protectionism,” it said.“Blaming other countries is always an easy, sure-fire way for politicians to whip up a storm over domestic economic woes, but finger-pointing and protectionism are counter-productive.”Such commentaries are not official policy statements, but they can be read as a reflection of government thinking.Xinhua said cheap Chinese steel had in fact created many jobs, as it is used by European companies, for example, who then use it to make products for export.“It should be noted that overcapacity is a global challenge amid a sluggish world economy. China is one of the most hard-hit, but the government is facing up to the headwinds,” it said.“The last thing the world needs is a trade war over this issue. Far more jobs will be lost than gained if protectionism prevails.”The Chinese government has said the issue is a global problem that should be resolved via dialogue and cooperation.Earlier this month, India initiated investigations into the possible dumping of cheap steel products into the country by six nations including China, Japan and South Korea.“China is paying close attention to this and hopes the Indian ministry of commerce and industry conducts the investigation strictly according to World Trade Organization principles,” China’s Commerce Ministry said in a statement on its website.(Reporting by Ben Blanchard and Michael Martina; Editing by Himani Sarkar)