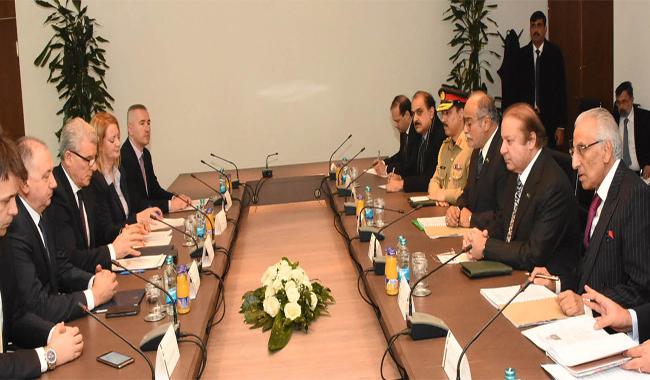 Says no presence of Daesh in the country; Pakistan wants peaceful resolution of issues with India; border management with Afghanistan being improved

SARAJEVO: Prime Minister Nawaz Sharif has declared that Tehreek-e-Taliban Pakistan (TTP) and al-Qaeda have been eliminated from the soil of Pakistan while Daesh doesn’t exist in the country.

“Despite paying a heavy price of lives and property and offering enormous sacrifices for elimination of terrorism, Pakistan’s resolve to play its role to eradicate terrorism completely from the region wouldn’t be shaken,” the prime minister said while talking to members of the Collegiums of Chambers of the Parliamentarian Assembly of Bosnia and Herzegovina here at the Institution Building on Wednesday.

The members on the occasion also announced their unflinching support for Pakistan and Nawaz Sharif on his position with regard to the Kashmir dispute.

The prime minister announced that Pakistan is interested in resolving all the outstanding issues with India, including Kashmir, through a peaceful process of dialogue. He said Pakistan is also improving border management with Afghanistan. The prime minister, who is on a three-day visit to Bosnia and Herzegovina, had a very busy schedule on the second day of his engagements. He had a candid discussion with the members of the Collegiums. The prime minister told the members that Pakistan had destroyed the infrastructure of terrorists in the bordering areas in the tribal belt that has broken the back of terrorists. He said the blowback from the terror groups was robust but Pakistan had overcome the situation considerably.

The premier said Pakistan had to pay the price in the shape of 40,000 lives. He announced to enhance cooperation with the host country in the fields of defence, energy and economy. Pakistan also proclaimed its support for full membership of the European Union and World Trade Organisation (WTO) for Bosnia and Herzegovina on the occasion.

Later, speaking at a joint news conference with host Prime Minister Dr Denis Zvizdic, Nawaz Sharif said the two sides have agreed to set up a joint commission to explore further cooperation in various fields. He said he had a most productive and detailed round of talks and reviewed the entire spectrum of their bilateral ties. He said Pakistan and Bosnia Herzegovina have agreed to strengthen their bilateral cooperation in trade, agriculture, textile, education and defence sectors.

Nawaz Sharif said the two countries have also agreed to strengthen their collaboration in investment and culture. The prime minister said Pakistan’s economy has shown great improvement in several years and the the growth rate had gone up. He invited Bosnian businessmen and entrepreneurs to take advantage of investment opportunities in Pakistan. He said Bosnia has a vibrant textile industry and a dynamic agriculture sector and Pakistan would like to seek its cooperation in these sectors.

The Bosnian prime minister said Pakistan is a sincere friend of Bosnia and thanked it for providing assistance to the country over the last 25 years. He said it is time to move the bilateral relations to a new phase and explore the possibility of developing their trade relations. He expressed satisfaction that trade between the two countries has registered growth during the last one year. The Bosnian prime minister said signing of different agreements would also help bolster the ties between the two countries. He said the joint commission of the two countries should identify more areas for cooperation.

Nawaz Sharif also held a meeting with a delegation of Grand Mufti of Bosnia and Herzegovina headed by Husein Kavazovic that came to the hotel of the prime minister.

Meanwhile, members of Bosnian parliament including chairman of presidency, speaker and deputy speaker of House of People called on Nawaz Sharif. During the meeting, bilateral relations, cooperation between parliaments of both countries and enhancement in trade and economic relations were discussed.

Addressing the Foreign Trade Business Forum, the prime minister said Pakistan offers uniform economic policy for foreign investors. He said that Pakistan’s economy is moving in the right direction with improved security situation, which had made it an ideal destination for foreign investment. “It is an ideal time. Let us join hands to tap the vast potential and develop sound footings for the trade relations between Pakistan and Herzegovina,” he told the members of Bosnia’s Trade Chamber and Foreign Investment Agency.

Nawaz Sharif said it is a pleasure to visit again the beautiful city of Sarajevo after some 20 years and assured that the people of Pakistan had warm sentiments for the people of Bosnia and Herzegovina. He expressed the confidence that his visit would further strengthen the bilateral relations between the two countries. Nawaz Sharif said that he firmly believes that strong trade is a requisite for a strong people-to-people relationship. However, he stressed the need for “translating the true potential of trade into a robust partnership”. He said both countries enjoy strategic geographical location and human capital, and added that the two governments need to avail this opportunity to strengthen their economies.

The prime minister mentioned that his government took head-on the challenges of turning around a sluggish economy and invested in social sector and also eliminated terrorism. He said the government has achieved significant targets, including the lowest inflation in 47 years and economic turnaround with growth rate of 4.7 percent and expected this to touch 5.5 percent. He said another challenge of crippling energy crisis has been overcome significantly and expressed the confidence that power loadshedding would end in one-and-a-half-year.

Dr Denis Zvizdic in his speech emphasised his commitment to energise the economic prosperity of his country, for which he is interested in boosting the trade ties with friendly countries including Pakistan. He said Bosnia is in a position to be a credible partner in business and mentioned his government’s priority of integration with the European Union. Dr Zvizdic said soon Pakistan and Bosnia and Herzegovina would launch the joint commission to discuss their mutual relations and mentioned the upcoming visit of Pakistani business delegation to Bosnia and Herzegovina to showcase their products. He said that proximity to the European Union made his country a more attractive economic destination for Pakistani businessmen.

Earlier, President of Foreign Trade Chamber of Bosnia and Herzegovina Bruno Bojic in his welcome address highlighted the reform process of his government to attract investors through good business opportunities. He mentioned that Pakistan and Bosnia and Herzegovina could explore the potential in the industries of defence, metal, construction, pharmaceutical and textile.