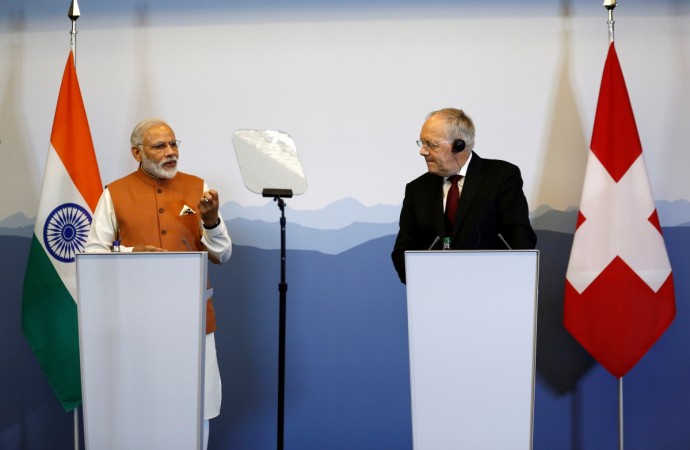 “An early start to negotiations on the Agreement on Automatic Exchange of Information would be important” says PM Modi. In Picture: Indian Prime Minister Narendra Modi gives a news conference with Swiss President Johann Schneider-Ammann after their meetings in Geneva, Switzerland, June 6, 2016.REUTERS

Talking about a shared commitment both India and Switzerland have in reforming international institutes in line with global realities, both countries also supported each other for their non-permanent membership bids to the United Nation Security Council (UNSC) on Monday at Geneva.

“After all, it is home to the “Red Cross” and headquarters of several international organizations devoted to serving mankind,” noted the PM, and called Geneva as the “truly international city…city with a humanitarian soul.”

India and Switzerland both have been the voices of peace, understanding and humanitarian values in the world, said the prime minister. Modi thanked Switzerland for understanding and supporting India’s membership to the NSG, as it will help India to pursue its atomic energy interest for peaceful and social purposes.

On the pressing global economic menace of black money (which Switzerland has become synonymous with) and tax evasion, both countries sought for an early and expeditious exchange of information to bring tax offenders to justice and to negotiate on the impending ‘Agreement on Automatic Exchange of Information.’

Prime Minister Modi said India was open to resume talks on another long-pending multilateral agreement to sign a Free Trade treaty with European Free Trade Association (EFTA), which includes Iceland, Norway, Liechtenstein and Switzerland as members. An initiative in this regard, according to PTI, began in 2008 but was stalled due to intellectual property rights (IPR) and data security issues.

“We see a perfect connect between our development needs and Swiss strengths. I, therefore, invite the Swiss companies to avail of this great opportunity to be a key partner in India’s economic growth. Ultimately, the economic prosperity of 1.25 billion plus would also benefit the entire world,” Modi said.

Emphasising how Swiss companies are household names in India, Modi sought for further strengthening of trade ties by expanding their economic engagement.

One of the outcomes of the meet was to build a training system suited to Indian milieu based on the European nation’s strengths of vocational and educational systems.

He cited an apparent success already seen by bonding between the two countries in the field of sports. India’s bright tennis player Leander Paes and Sania Mirza consistently winning Grand Slams by teaming up with the Swiss legend Martina Hingis in mixed and women doubles, respectively, he said was an example already set to adopt.

Calling people to people connectivity as an important “base and benchmark” in bilateral ties, the prime minister highlighted that it was being refreshed over the years in Switzerland being a popular destination for Indian filmmakers. He called for more Swiss tourist to utilise the e-Tourist Visa facility to visit India.