Concerns about the country’s old age pension scheme and health insurance coverage were high on the agenda of the most recent assembly of the Swiss Abroad Council. The delegates, meeting on the shores of Lake Lucerne, raised a series of practical problems.

“Social security issues have been a recurring topic for the Organisation of the Swiss Abroad (OSA), just like e-voting or problems for many expats to open a bank account in Switzerland,” said OSA co-director Ariane Rustichelli during Saturday’s meeting in Brunnen.

Since a reform of the old age pension system is underway in the Swiss parliament, the expat assembly focused on a voluntary scheme for Swiss citizens living outside the European Union or the countries of the European Free Trade Association (EFTA).

Currently, 14,000 people from outside the EU/EFTA – or 5% of the total number – benefit from the voluntary old age pension scheme, according to the Federal Social Security Office.

In giving a short history of the voluntary state pension scheme, Roberto Engeler, a leading member of the OSA, conceded flaws in the system since its beginning in the late 1940s.

“Reforms of the scheme were introduced at the expense of the weakest members of society or those who temporarily live outside Switzerland and miss out on regular contributions,” he added.

“The problems are increasing,” he warned and called on the government to consider possibilities for a voluntary old age pension scheme regardless of the country of residence of the Swiss expats.

Jürg Brechbühl, director of the Social Security Office, said a revision of the voluntary scheme could be tackled once the mandatory state old age pension scheme was successfully reformed.

Parliament agreed to overhaul the voluntary system in 2001 because of Switzerland’s bilateral treaties with the EU, notably limiting the circle of beneficiaries and increasing the rate of contributions.

However, Brechbühl acknowledged that efforts were necessary to improve cooperation with other countries and between the different pension systems, especially when it comes to simplifying the control mechanism.

“It won’t be easy and it will take time,” he cautioned.

The voluntary pension scheme ran up a deficit of CHF37 million ($38.2 million) last year, mainly because the financial payments made exceed the amount of contributions, as Brechbühl explained.

Delegates taking part in workshops at the Swiss Abroad Council also identified a series of problems with health insurance coverage.

Some participants wondered why health insurance premiums for expats are so much higher than in Switzerland. Others pointed out practical problems for Swiss citizens returning to Switzerland at retirement age.

There were also questions about apparent difficulties with having additional health insurance coverage or with finding specific information about insurance schemes in other countries.

In response to the questions, Olivier Peters of the Federal Health Office said Switzerland’s mandatory health insurance coverage was very good compared with other countries. He assured the delegates the government had to plans to change the existing system for the Swiss living abroad. 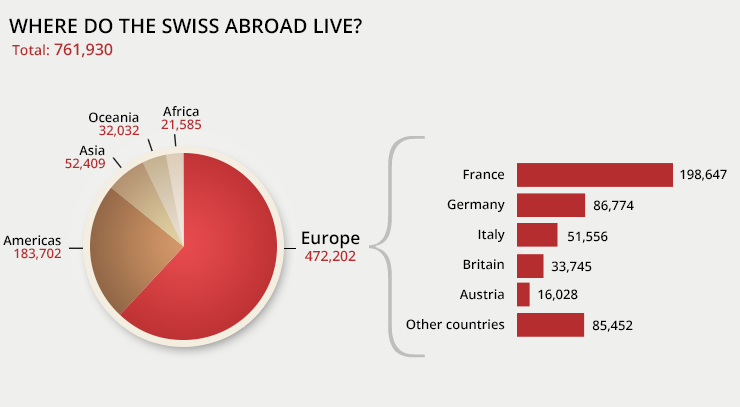 On Saturday, the Swiss Abroad community also celebrated the 25th anniversary of the Swiss expat square in Brunnen on Lake Lucerne.

Set up in 1991, the 5,400 square metre open park site opposite the Rütli meadow is meant to show the affiliation of the Swiss Abroad to their home country.

The board of the foundation in charge of the site also awarded Swiss-Australian illustrator and author Lucienne Fontannaz-Howard a one-month grant as artist in residence.

The 140-member assembly is part of the Swiss Abroad Organisation (OSA) and meets twice a year.

It is made up of representatives of Swiss clubs and associations abroad and of members of domestic institutions, including swissinfo.ch.

The assembly represents the interests of Swiss expatriates before the authorities and public opinion in Switzerland.