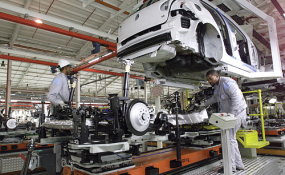 The Volkswagen South Africa plant in Uitenhage is the largest vehicle factory in Africa (file photo).

Windhoek — While the preferential treatment extended to European Union (EU) goods would witness an increase in imports from that economic bloc, given its larger production and productivity base, it may strain the competitiveness of domestic industries.

Cumulation is a concept used in preferential trade agreements, which essentially widens the definition of originating products and helps manufactured goods meet the relevant rule of origin.

Cumulation allows products granted originating status in one partner country to be further processed or added to products originating in another participating country, as if they had originated in that latter country, without the finished product losing the benefit of preferential customs tariffs. It can only be applied between countries operating with identical origin rules.

Namibia recently signed the EU-Southern African Development Community (SADC) EPA, joining a group of four other countries in the region in favour of increasing access to the sought after EU market.

Insodoing Namibia became a signatory to the EPA, alongside South Africa, Lesotho, Mozambique, and Botswana, in a move seen as a major achievement in trade and economic relations between the EU, African Union (AU), Southern African Development Community (SADC) and the African, Caribbean and Pacific (ACP) group of countries.

“It is fair to say there will be challenges to implement the EPA in a manner that will be mutually beneficial to both parties. Namibia has to focus on implementing our Growth at Home strategy towards industrialisation to make optimal use of the market access provided for under the EPA. In this regard, it is crucial to expand our agricultural and industrial output to achieve equitable benefits.

“For a small economy with a limited production base and affected by a lack of skilled labour and high production costs caused by amongst others, high input prices, that will be a considerable task,” Schlettwein said while addressing the 31st Session of the ACP-EU Joint Parliamentary Assembly in Windhoek last week.

Despite concerns about the potential strain on local industries, Schlettwein was pleased with the interest expressed by some EU firms to invest in manufacturing in Namibia, which would allow them to exploit the market access achieved through the EPA.

They also seek access to regional and continental markets being developed through the negotiation of a Tripartite Free Trade Area amongst SADC, the Common Market for East and Southern Africa (COMESA), the East African Community (EAC) and the Continental Free Trade Area. It would encompass almost the whole of Africa.

Schlettwein, however, cautioned that much more needs to be done to encourage EU companies to expand to Namibia and the ACP region, saying this is an area where Namibia calls for more intensified cooperation with the EU at all levels.

“No doubt, the entry into force of the SADC-EPA has associated adjustment costs in terms of, among others, the competitiveness of the domestic industries and trade-related revenue at country and Southern African Customs Union (SACU) External Tariff level, due to the liberalised tariff regime.

“Thus, the net positive welfare effect on Namibia will largely depend on the extent to which domestic industries successfully adjust to the liberalised trading regime, the price competitiveness and new business formations expanding to Namibia,” said Schlettein.

He added that he hopes the EU would take “great care” in the introduction of behind-the-border measures, such as technical standards or environmental certification that would inadvertently erode the advantages gained in the EPA.

The recently signed EPA provides Duty Free Quota Free (DFQF) market access to ACP products into the EU. For Namibia, the agreement does not only guarantee continued market access for current products, such as beef, grapes, dates and fish into the EU, but also provides an opportunity for the country to diversify its export basket.

In return for market access Namibia (and other ACP countries) will need to reciprocate by granting unrestricted market access for EU goods into their territories at the agreed preferential duties.

As the principal outcome of the EPA negotiations, secure market access for Namibian products into the EU will provide an enabling framework for local production, manufacturing and value addition and thus supports the achievement of the Growth at Home industrialisation strategy.

“Despite the important benefits obtained through the market access that was negotiated through the EPA and similar agreements, we are concerned about the long-term erosion of market access preferences globally. The plethora of bilateral trade agreements in our view contributed to the collapse of the Doha Round in the World Trade Organisation (WTO)”, Schlettwein noted.