So much for unity! EU in disarray as MEPs threaten to start their OWN Brexit talks with UK 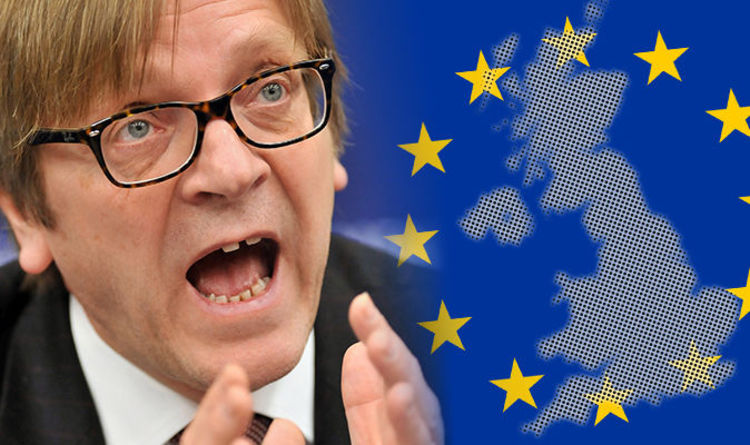 Guy Verhofstadt, the EU Parliament’s chief negotiator, savaged representatives from the European Council and threatened to start up his own talks with the UK if MEPs are not given a leading role in the Brexit process.

His astonishingly blunt ultimatum will alarm European leaders and signals the start of a long and acrimonious war between the Council, which represents the interests of the individual member states, and the Parliament which speaks for the euro elite in Brussels.

Former Ukip leader Nigel Farage said the proposal showed that the EU had become “so unworkable” that Britain should ditch triggering Article 50 and instead just walk away from the troubled bloc.

The row erupted after Mr Verhofstadt accused EU Council chiefs of trying to sideline the EU parliament and hand MEPs only the most minimal role in the Brexit negotiations.

European leaders fear that the talks with Britain will become too bitter and politicised if MEPs are allowed a significant input, and have moved to shut them out.

But speaking at a plenary session of the EU Parliament today, Mr Verhofstadt blasted: “What they are proposing is simply to say we go forward with the Brexit negotiations without the parliament.”

He then rounded on stunned EU Council official Ivan Korcok, asking him: “Are you not aware that we have to approve these arrangements?

“Do you want that we open separate negotiations with the British authorities? You can get it – if that’s what you want we’ll do it. It’s time that you also involved the parliament from day one.”

MEPs will have to vote on any Brexit deal reached with the UK Government, and fears have already been raised that militant europhiles within the EU Parliament will make it impossible for both sides to reach a sensible compromise.

But the former Belgian prime minister’s outburst was just the latest sign of the gaping cracks opening up in Brussels over how to deal with Brexit, despite public claims by eurocrats that the 27 other member states are all united in their approach.

And he was immediately backed up by outgoing EU Parliament chief Martin Schulz – who is set to become Germany’s next foreign minister – and who added: “One thing is clear, the point that you’ve just addressed is one that I will raise at the meeting of the conference of Presidents.

“The draft conclusions of the European Council makes it clear that the Council sees the Parliament as an unpleasant burden in negotiations.

“Well, I can only say that the European Parliament from the first minute, at both the level of the sherpas [Brussels special advisors] and the European Council, I say we’re moving towards quite a confrontational period of time.”

He told the chamber: “I’m concerned listening to Guy Verhofstadt that once we trigger article 50 it may become so unworkable that we simply have to say we’re going goodbye.”

Some members of Ukip have called on Theresa May to skip exit talks with other European Union states altogether by simply repealing EU law and trading with the bloc under World Trade Organisation (WTO) rules.

But economists have warned that Britain’s economy will suffer unless it can secure a favourable deal with the troubled bloc, saying the services and finance sectors would be particularly hard hit.