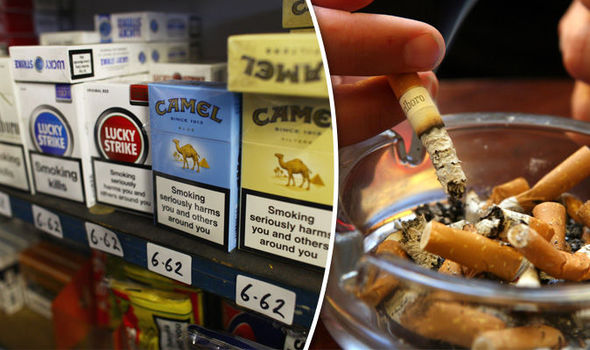 The sweeping new rules imposed by the EU’s top court will see flavoured cigarettes banned, as well as smaller packs.

Judges have recommended to throw out menthals because they make smoking “appealing”.

The European Court of Justice threw out challenges from Poland and tobacco firms who called a 2014 EU directive on the new rules “disproportionate”.

The rules will also enforce plain labels covering at least 65 per cent of all cigarette packs, alongside more health warnings.

The crackdown on smoking has sparked a new row about the EU’s influence.

New rules on packaging will take effect from May 20, but the new packets will not be on sale until stocks of existing cartons have been cleared over the next year.

E-cigarette companies will also be required to display health warnings and limit their nicotine levels to 20 grams and restrict advertising and sponsorship by their makers.

All advertising for e-cigarettes or refills on television, radio, websites, newspapers and magazines will also be banned.

A BAT spokesperson said: “We stand by our belief that the Tobacco Products Directive is a clear example of the EU overstepping the limits of its authority. The reality is that many elements of the directive are disproportionate, distort competition, and fail to respect the autonomy of the Member States.”

The Independent British Vape Trade Association also said it was disappointed by the ruling on e-cigarettes and argued it could push some e-cigarette smokers back to tobacco.

But judges in Luxembourg said the measures were “appropriate and necessary” to reduce smoking.

Bans on mental cigarettes will be enforced from 2020, while packs of 10 will be prohibited from May 20.

The Department of Health said: “We warmly welcome the judgment. The new requirements for tobacco products, e-cigarettes and herbal products will come into force on May 20 and are expected to result in £13 billion in health benefits in the UK alone.”