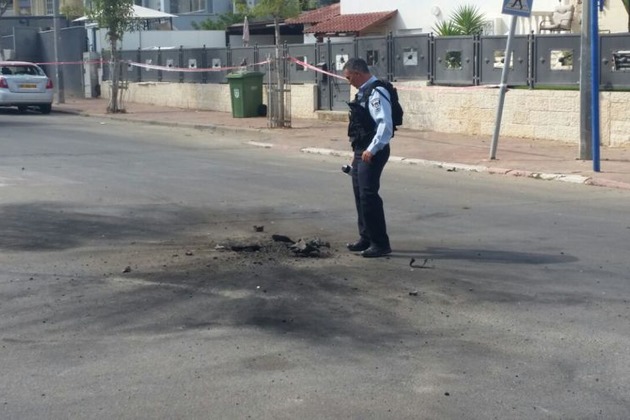 • Provoked, Israel carried out airstrikes on the Gaza Strip

• A small Islamic group claimed the attacks on Twitter, says it is inspired by the Islamic State group

JERUSALEM, Israel – Resident of a small southern Israel town, Sderot were left horrified as loud sirens blared across the town, warning them of an incoming projectile.

The rocket, that the Israeli military has claimed was fired from the Palestinian territory, penetrated Israel’s aerial defense system and landed near a school on Mishol Homa Umigdal.

While no injuries were reported from the rocket fire, the Magen David Adom medical service pointed out that three people were being treated for anxiety and shock at the Ashkelon’s Barzilai Medical Center.

After some damages were notified, the police closed the street for examination.

Provoked by the rocket, the Israeli military said it carried out airstrikes on the Gaza Strip. Reports pointed out that the Israel Defence Forces launched an attack on the northern Gaza Strip’s Hamas launch site, Beit Hanoun.

Palestinian eye-witnesses told the local media that plumes of smoke arose from the Gaza and that there were at least nine Israeli airstrikes on Hamas posters and open spaces through the strip. There were no reports of injuries from the region.

The rocket attack on Wednesday was one of the few projectiles to have struck the town since the 50-day war between Israel and Gaza militants concluded in 2014. The ceasefire in the region has been held to a large extent. However, Gaza sometimes sends rockets towards Israel and Israel blames Gaza’s Hamas rulers for any attacks emerging from the region.

Meanwhile, some reports stated that a small Islamic group, calling themselves ‘The Grandchildren of the Followers of the Prophet’ claimed the rocket attack on Twitter. It posted a statement on the microblogging site and said that it is not officially connected to the Islamic State Militant Group, but is inspired by the terror outfit.

Israeli media quoted the Ahfad al-Sahaba-Aknaf Bayt al-Maqdis terrorist group as claiming the rocket attack. The group is said to have issued statements in Arabic and Hebrew.

It said, “Oh you cowardly Jews: You don’t have safety in our land. [Former defense minister Moshe] Ya’alon, the failure at giving security. [Defense Minister Avigdor] Liberman to fail will be a certainty,

The group reportedly said it was avenging the arrest of several members of the Salafist organization by the Strip’s Hamas rulers.

Hamas spokesman Sami Abu Zuhri meanwhile issued a statement and said, “We condemn the Israeli escalation against the Gaza Strip. Hamas stresses it can not keep silent if the escalation continues.”