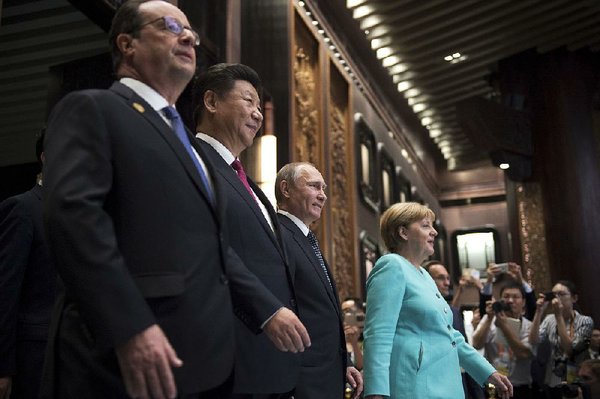 The Group of 20 summit opened Sunday against a backdrop of sluggish global growth and disputes over China’s steel exports and Apple’s Irish tax bill.

China made trade a theme of the meeting even as Beijing faces complaints it is flooding world markets with low-cost steel, fueling demands for trade curbs. The president of the European Commission highlighted the conflict by calling for the summit to take action.

Opening the two-day meeting in a lakeside city southwest of Shanghai, Xi called for innovation to spur economic growth and for changes to global financial and economic management. He appealed for cooperation in taxes, fighting corruption, and measures to “improve the ability of the world economy to resist risks.”

Chinese officials said earlier that Beijing would propose a plan to boost trade and innovation through regulatory changes and closer government cooperation.

“We should build an open world economy,” Xi said before an audience that included President Barack Obama, German Chancellor Angela Merkel, British Prime Minister Theresa May and leaders from Japan, South Korea, India and other governments.

China hopes to use its status as this year’s G-20 leader to increase its influence in global economic management. Chinese officials say they want the leaders’ summit, created to coordinate the response to the 2008 financial crisis, to take on a longer-term regulatory role.

The World Trade Organization is forecasting this year’s global trade growth at 2.8 percent — its fifth straight year below 3 percent.

Leaders at the meeting have said they will call for “inclusive growth” — a reference to efforts to defuse pressure to protect local industries by spreading the benefits of closer global integration to millions of people who have been left behind by wrenching changes.

Obama stressed that theme at a separate news conference with May.

“We understand that many of our citizens are frustrated by the pace of globalization and feel they’re not experiencing the benefits of international trade,” Obama said. “We must all work together to spur economic growth, to boost free trade and build a fairer economy that truly works for all.”

The G-20 meeting “must urgently find a solution” to excess steel production, said Jean-Claude Juncker, president of the European Commission. He called on Beijing to accept a monitoring mechanism for overproduction that Beijing’s trading partners blame for low prices and job losses.

Juncker also rejected U.S. criticism of the order for Ireland to collect $14.5 billion in back taxes from Apple. An EU panel ruled that Apple improperly received government aid in the form of tax rates that were lower than those paid by other companies. Ireland has made low taxes a part of its strategy to attract investment.

“Free trade must be fair trade,” Juncker said at a news conference with Donald Tusk, president of the European Council.

Another prominent issue at the summit is G-20 member Britain’s June vote to leave the 28-nation EU, seen by some analysts as the first in a wave of moves by other nations to retreat from free trade.

Germany, South Korea and other governments say they also want to discuss climate, energy and possible tweaks to the global tax system to reduce tax evasion.

The meeting began on a diplomatic high note after a joint announcement Saturday by Obama and Xi that their governments had submitted documents committing them to carrying out the Paris climate agreement.

But U.S. and other officials say they plan to bring up Chinese industrial overcapacity and other potentially thorny issues. Washington has imposed import duties of up to 500 percent on Chinese steel to offset what regulators say are improper subsidies.

China, the world’s biggest steel producer, has committed to reducing its production capacity by 100 to 150 million tons by 2020, a pledge Xi repeated Saturday.

“This is a global problem, but with a specific Chinese dimension we have to address,” Juncker said. “We are really insisting on the need to take this seriously.”

Juncker defended the EU’s tax order on Apple against U.S. criticism and rejected suggestions that the company was targeted because it is American. He said previous tax orders have affected European companies, including a January ruling that covered 35 enterprises, most of them from Europe.

“This is not a decision against the United States of America,” Juncker said.

Tusk affirmed the EU’s stance on Britain’s possible departure, saying there would be no talks with London over future relations until it formally begins the withdrawal process. Uncertainty over the status of trade, immigration and other critical issues has disrupted business activity and prompted anxiety among investors.

“We need to protect the interests of the members of the EU that want to stay together, not the one which wants to leave,” Tusk said.

Speaking at the news conference with Obama, May said her government was going ahead with its departure and was looking to create new trading opportunities.

“There will be no second referendum, no attempt to turn the clock back or get out of this,” May said.

The two leaders tried to downplay the impact on U.S.-British relations, but Obama suggested that London might have to wait to make a post-EU trade deal.

“I never suggested that we will quote unquote punish Britain,” he said. “I was asked about the viability of negotiating a separate trade deal between the U.S. and the U.K.” He said the U.S. was focused on its trans-Pacific and trans-Atlantic trade deals and “it would not make sense for us to put those efforts aside.”

May warned there were “difficult times ahead” for the U.K. economy.

She said different pieces of data had sent “different messages” about how the economy was responding to the U.K.’s vote to leave the EU, but that businesses she had spoken to had told her “let’s get on with it, let’s make a success of it.”

She said she saw a role for Britain as a global champion of free trade, but added the poorest in society needed to be protected. “We can’t ignore the fact that there’s sentiment out there which is anti-globalization,” she said. “We need to consider how, when we put these free trade arrangements in place, they’re actually going to benefit everybody.”

Xi and Japanese Prime Minister Shinzo Abe will have a meeting this evening — not just a handshake, an official said. Asia’s two largest economies have long bickered over territory and Japan’s wartime history, but tensions have risen in recent months, even as trade and tourism have held up.

Beijing has taken more assertive measures by sending greater numbers of vessels near uninhabited Japanese-administered islets in the East China Sea, triggering a flurry of protests from Tokyo.

The latest tensions haven’t dented Chinese tourism to Japan — the 731,400 visitors in July marked a monthly record — or affected trade.

“It’s a good opportunity for both nations as they face economic downturn pressure domestically,” said Liu Jiangyong, director of international relations at Tsinghua University in Beijing, referring to a Xi-Abe meeting. “An improved relationship is needed by both China and Japan.”

South Korean President Park Geun-hye early today said her nation also wanted an improved relationship with China. Speaking on the sidelines of the G-20 summit, she said her country’s ties with China were hurt by what she called North Korea’s provocations.

South Korea’s Joint Chiefs of Staff said in a statement that the three missiles, launched from the western North Korean town of Hwangju, flew across the country before splashing in the waters off its east coast. Officials, who said the firings were a show of force timed to the summit, did not describe the range of the missiles.

The launch came four days before the 68th anniversary of the founding of North Korea’s government.

China is the only major ally of neighboring North Korea, but that alliance has frayed because of a string of nuclear and missile tests.

Information for this article was contributed by Joe McDonald and Louise Watt of The Associated Press and by Robert Hutton and Isabel Reynolds of Bloomberg News.