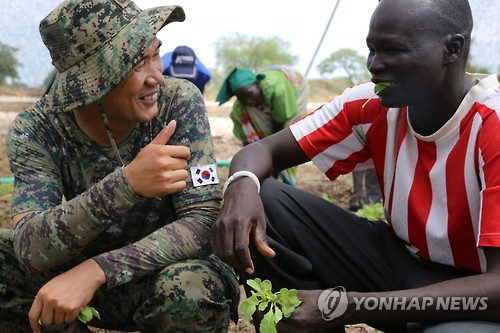 South Korean peacekeeping troops in South Sudan are sharing the home country’s farming techniques with local farmers, a move that is hoped to ease food shortages in the conflict-stricken country.

A total of 60 South Sudanese people have completed the program so far, raising expectations that they will take a leading role in the development of agriculture in the African country.

The South Korean contingent established a farm in July 2014 to teach advanced farming technologies to the South Sudanese people. The farm was expanded and upgraded to become the Hanbit Agricultural Technology Research Center late last year.

The center accepts 30 students for a ten-week course.

The South Sudanese government hands out completion certificates and provides patches of land measuring 20 to 40 square meters to each of the center’s graduates for farming.