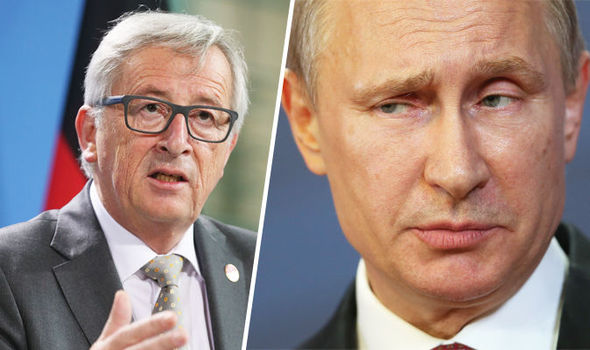 The beleaguered Eurocrat sent out a fresh warning that Moscow must also agree to work closer with Brussels to improve the political and economic situation across the continent.

Speaking at the 20th International Economic Forum in Saint Petersburg, worried Juncker singled out Russia’s “leadership” as one faction with which crisis talks are crucial.

He said: “We must not only talk about Russia, also talk with Russia — its leadership, its people.

“If our relationship today is troubled and marked by mistrust, it is not broken beyond repair.

But Juncker’s worries over the EU’s Relationship with Russia are unlikely to be resolved unless Vladimir Putin’s government agrees to the Minsk agreement – which sets out the terms designed to settle the unrest in Eastern Ukraine.

The Eurocrat’s hopeful vision for a more united front between Moscow and Brussels was also set out in his speech.

The desperate Commission President spoke of his want for “a vast region governed by the rule of law, trading freely and working together on common projects”.

But he also stressed Russia’s need to adhere to the terms of the Minsk agreement.

He said: “On Minsk, the European Union is united. And so is the G7.

“Together, the European Union and Russia — even with our differences — must share a commitment to the basic human values that underpin a free society.”

Juncker’s feeble speech comes after the EU filed a complaint to the World Trade Organisation against Russia’s counter-sanctions that have hit food exports from the bloc.