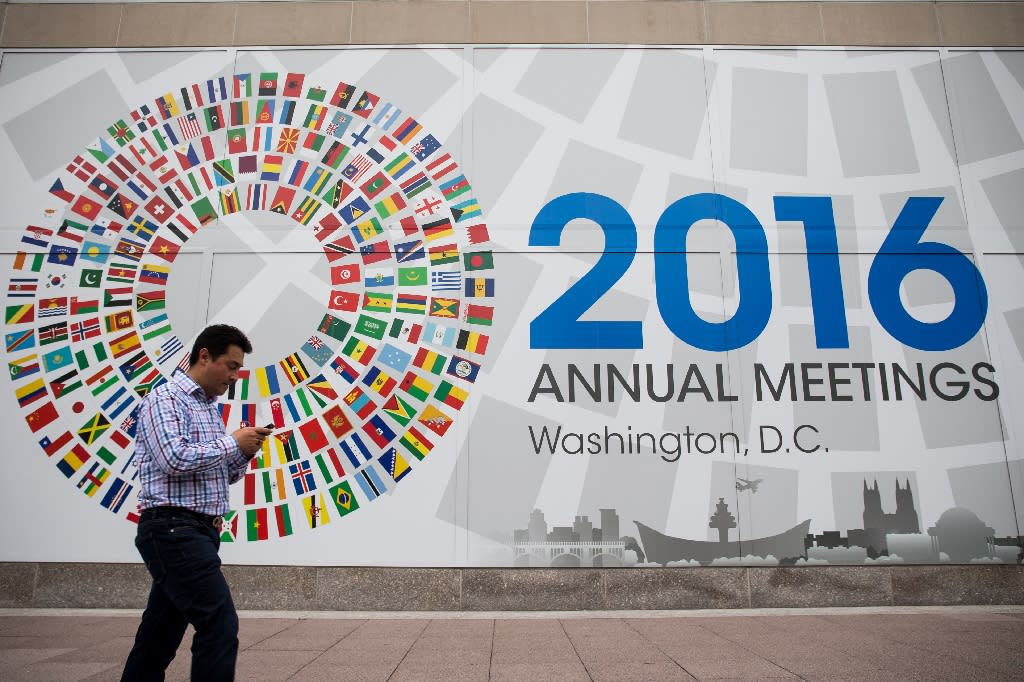 Washington (AFP) – Protectionism’s rise in Europe and the United States is pushing the world’s economic leaders toward a delicate balancing act: defending globalization but acknowledging the pain that sometimes comes with it.

With the US presidential elections a month away, the annual meetings of the World Bank and International Monetary Fund kicked off this week in Washington with a stern warning: For the world to turn its back on trade now would only worsen the ills of a flagging global economy.

“Increasing pressure for inward-looking policies are a particular threat to the global outlook,” the IMF said in downgrading growth forecasts for advanced economies, pushing concerns about Deutsche Bank’s stability and China’s commercial debt binge into the background.

The president of the World Bank, Jim Yong Kim, urged world governments to banish “the storm clouds of isolationism and protectionism,” saying that open borders had lifted a billion people out of poverty in over a quarter century.

Long bandied about by the major international financial institutions, this message faces an increasingly unreceptive audience.

In the United States, long a bastion of trade liberalization, Republican presidential nominee Donald Trump has rallied supporters by promising a trade war with China and retaliatory import duties on Mexico.

Across the Atlantic, the British vote to secede from the European Union threatens to spur other countries to roll back economic integration in Europe. The free-trade pact currently under negotiation with the United States, known as the Transatlantic Trade and Investment Partnership, faces stiff resistance in Europe.

Against a backdrop of sluggish global trade, these accusations extend far beyond the insular clique of activist NGOs and are starting to threaten established dogma.

But Germany says it will hold the line.

And for now, only a few countries, such as Poland, have gone so far as to enact protectionist measures.

But the possibility of a re-set, or at least a rhetorical one, is setting in amongst the world’s financial centers, which fear they risk encouraging populist movements by remaining deaf to the rising grievances about globalization.

The IMF and its managing director Christine Lagarde have been foremost in this reckoning, conceding that global growth benefits too few and globalization’s losers should receive dedicated support.

In an opinion piece published Wednesday in The Wall Street Journal and co-authored with the heads of the World Bank and World Trade Organization, Lagarde also said global trade should benefit everyone.

“Despite the tremendous benefits of trade, too many people feel it has left them behind,” the co-authors said. “Transforming trade into an engine of growth for all… requires reinvigorating trade integration, not rolling it back.”

There is no telling, however, whether this will suffice to weaken the appeal of protectionism, which is fed not only by economic malaise but also by a rejection of economic elites, which are epitomized by the World Bank and IMF.

The rise of protectionism is a sign of “a fundamental distrust of the financial elites,” said Paulo Nogueira Batista, vice president at the New Development Bank.

“The problems that arose in the banking sectors, the multiple instances of fraud, misconduct, the failure of the organizations in Washington to face up to the challenges… this all created a mixture of resentment, a feeling that this system doesn’t represent the people,” he told AFP.