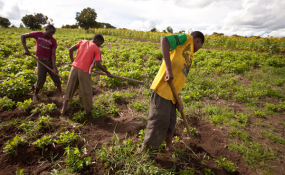 Rudimentary. Farmers have continued using sub-standard tools despite government promising them modern ones.

The Forum, held at the International Conference Centre, now the Kampala Serena Hotel, was organised by the Ministry of Planning and Economic Development with funding from the United States Agency for International Development (USAID). It came after four consultative meetings hosted in all the four regions of Uganda in June that year.

The strategy, whose theme was: “A Response to Overcome the Challenge of Poverty and Growth”, was driven by the belief that “the fundamental issue of food insecurity in Uganda is not due to lack of food resources, but rather mismanagement and under-utilisation of resources.”

The promoters of the policy, led by the then Minister for Planning and Economic Development, Mr Richard Kaijuka, projected that once implemented, the anticipated high levels of agricultural production would not only make Uganda food secure, but that it would also help alleviate poverty and raise the standards of living.

It was also projected that such high production levels would translate into increased incomes for farmers and creation of job opportunities in rural Uganda.

This was supposed to be achieved through helping farmers secure their land; provision of agricultural extension services; use of high-yielding crop varieties and improved agricultural inputs, plus investments in research and development.

Rural farmers were to be availed credit to boost production. The funds were meant to be drawn from among others a micro-finance programme to which the World Bank had in March 1995 committed $200 million as support for bilateral agencies and small scale credit. Additional funding would come from the USAID Line of Credit in the Cooperative Bank; the Agricultural non-Traditional Export Promotion Programme (ANEPP)’s capital venture component in DFCU Bank and a European Union funded Euros 5.26 million Credit and Marketing Support programme in the Uganda National Farmers’ Federation (UNFA).

Production of Non-Traditional Agricultural Exports (NTAE), especially maize and beans, were to be encouraged. These were set to be exported to Rwanda, Kenya and the member countries of the Common Market for East and Central Africa (COMESA) and to the South African Development Corporation (SADC).

The strategy, which later that month (November 1996), formed the basis for Uganda’s presentation at the World Food Summit in Rome, was so highly thought of that it was believed that it could serve as a model along which other food insecure countries in Africa could work to overcome the problem.

The strategy was launched at a function where President Museveni was represented by the then Prime Minister, Mr Kintu Musoke, but it was never operationalised. For 20 years now, the policy documents have been gathering dust on the shelves of the Ministry of Finance, Planning and Economic Development.

Government’s failure to set into motion the strategy has resulted in food insecurity, hence the famine which has been ravaging a number of districts. Isingiro District in western Uganda has been in the news lately as people starve, and in different parts of eastern Uganda food insecurity has become commonplace for so long that some people are reported to have resorted to eating boiled cassava leaves and water.

Irrigation, which was meant to be carried out as part of the strategy, is a topical issue today because the two rainy seasons largely failed this year and the crops failed as a result. People who depend on rain-fed agriculture and were self-sustaining in terms of food production, like those in Isingiro, now live on food hand-outs.

Despite being regarded as a potential food basket for the region because of its favourable climate and soils, Uganda has not lived up to the billing because agriculture is still too dependent on nature and the farmers remain disorganised and unsupported.

Agricultural extension services, provision of high-yielding seeds and mechanisation have never been realied. The hand hoe remains the main tool in the hands of the farmer and farming practices remain largely rudimentary.

According to Ms Connie Acayo, the Assistant Commissioner in Charge of Communications at the Ministry of Agriculture, Animal Industry and Fisheries, the strategy was a short term plan that ran its course and that some of the action points that had been laid out have since been implemented through mostly poverty alleviation programmes.

She says farmers have been given high-yielding and drought resistant seeds under both the National Agricultural Advisory Services and now Operation Wealth Creation programmes. She says the number and volume of non-traditional agricultural exports (NTAE) has increased beyond the beans and maize that the strategy had focused on.

“I think that Uganda needs to as a matter of urgency set up major irrigation schemes like Egypt and the Sudan which depend on our water have done. We could start with districts around the country’s major water bodies like River Nile and Lakes Victoria, Kyoga, Albert and George,”
Daudi Migereko, Former MP for Butembe County and Minister for Lands and Urban Development.

“The number of Non Traditional Agricultural Exports has been on the rise. We now export so many products including sweet bananas, apples” – Connie Acayo, Assistant Commissioner in Charge of Communications, Ministry of Agriculture, Animal Industry & Fisheries “The government recently came out to announce that about 85 districts do not have enough food. I think we do have all the right policies (to make Uganda food secure) in place. What seems not to be happening is the implementation of these policies. I think the National Planning Authority (NPA) needs to come in and play a crucial role here,”
Ms Victoria Ssekitoleko, former Minister of Agriculture, Animal Industry and Fisheries.

“I had to suspend my foray into commercial farming because of the rather high costs of operation. Agricultural financing was hard to come by yet inputs and other necessities are really costly. I think that is hampering many people’s work in agriculture and it is what is hampering our ability to produce enough for local consumption and later export,”

The idea of creating small scale industries around major towns to provide young people with jobs is great, but the biggest challenge will remain failure by the government to implement projects through the right channels.
Why would the President say this idea would be implemented by a Special Presidential Advisor when there is a Ministry responsible for industry? In addition, there is a Ministry in charge of youth affairs and a Minister of State in charge of investments.
The Ministries have the necessary human and financial resources, which Presidential Advisors do not have to see such projects through.