Priti Patel: Aid won't just be money for nothing now 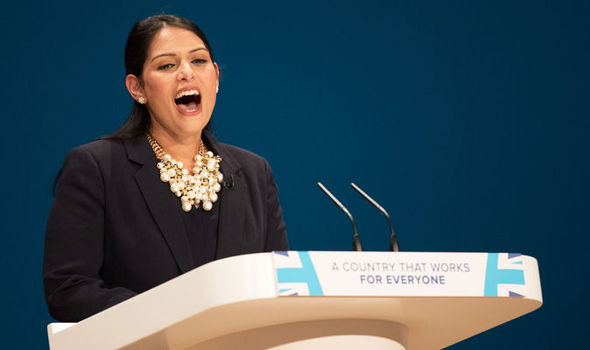 Government insiders said plans are being drawn up to ensure the £12billion the UK spends each year on overseas development has a proven benefit to ensure the money is not wasted.

It is understood that the Department for International Development will not give money to undeserving causes just to meet the spending target of 0.7 per cent of national income.

The suggestion will be music to the ears for some Tory backbenchers who have spent years opposing the aid commitment , which was a Conservative manifesto pledge last year.

The source said: “We will not race to spend the money by the end of the year to meet the Government rigid target on overseas aid.

“If money is left over at the end of the spending run and there isn’t a good enough business case to spend it, then it won’t be signed off.

“We’re not spending money for spending sake. Every penny of foreign aid has to be accounted for.” As part of plans to overhaul the country’s aid budget targets will be set to ensure countries receiving foreign aid are spending it according to pre-agreed conditions and if they fail, they will not receive any further funding.

Those receiving the funding will also be required to provide evidence of who it is helping. If money has been given to educate a set number of women who otherwise wouldn’t have access to learning evidence would need to be produced proving that they had benefi ted.

International Development Secretary Priti Patel, who once called for her department to be abolished, has spent the past three months scrutinising every aspect of the programme. She is said to have been alarmed by some of the businesses cases put forward by some charities and non governmental organisations bidding for cash from her department.

It follows a series of revelations about how public money has been squandered on everything from reducing flatulence in Colombian cattle to creating an Ethiopian version of the Spice Girls.

Now she is drawing up plans to overhaul foreign aid spending which will see millions of pounds poured into foreign hotspots to deter mass migration to the UK and mainland Europe.

She will also turn off the aid taps to the European Union, which has been accused of squandering vast sums of British money and instead focus on “results and outcomes that allowthe poorest to stand on their own two feet”.

Ms Patel has called for aid to be used to empower the world’s most disadvantaged communities to “work and trade their way out of poverty” rather than treat them as “passive recipients of our support”.

She said: “I don’t see my new job as just about aid. I want to help build the UK’s trading partners of tomorrow.

We must seize the opportunity of leaving the EU to expand free trade with those who need it most, to boost investment in the poorest countries and to forge new alliances with the world’s emerging economies.”

The Department for International Trade has made no secret of its desire to broker free trade deals with developing countries that may have been recipients of foreign aid in the past. Although legally the Government cannot propose a “trade for aid” type deal it is hoped that countries which have received British taxpayer’s money will be more receptive to opening up their markets to the UK.

Last month Dr Fox said Brexit was a “golden opportunity” for the UK to trade with developing markets.

He used a speech to suggest that as a newly independent member of the World Trade Organisation the UK can fight for trade liberalisation and help developing markets trade their way out of poverty by giving them “preferential access to our markets”.