Prince William tonight spoke of the importance of Britain and Norway standing together in the fight against ISIS (Daesh).

He said our close links with the Norwegian military - who our forces serve and train alongside - is crucial for our defence.

In a strong speech at dinner hosted by King Harald he said, "British and Norwegian armed forces serve together on NATO missions.

"They train together. They will soon be operating the same sophisticated fighter aircraft and maritime patrol aircraft.

"The relevance of our alliance is demonstrated by the part our countries are playing in the coalition that is countering the challenge of Daesh (ISIS).

"We have also stood together to try to bring peace and stability to Afghanistan and Sudan. And we have not shrunk from tackling daunting humanitarian tasks in countries such as Syria.

And he spoke of Norway's "staunch" resistance to the Nazi's in World War 2.

William added: "For the United Kingdom, our relationship with Norway is extensive and very special. We are North Sea neighbours. We are allies. We are close partners in all sorts of enterprises. But above all we are the strongest of friends."

He went on: "In Britain we will forever admire the courageous spirit of Norwegians during the Second World War.

"King Haakon’s staunch resistance to the Nazis resonated strongly in Britain, a beacon of defiance, as Europe lived through one of its darkest periods.

"Defending freedom is a core value for both Norwegians and Britons. The cherished symbols of our freedom and friendship are the Christmas trees sent from Norwegian communities to Britain each December. These remain as warmly appreciated today, as they were 70 years ago when the generous tradition began.

"The war years and their immediate aftermath convinced both our countries that we must maintain strong national defences. Britain and Norway were among the founding members of NATO in 1949. And in the 21st century, we continue to be in the NATO vanguard, adapting our alliance to the threats of today."

He said: "Geography and history made Norway and the United Kingdom not only North Sea neighbours, but the staunchest of allies. The number of pressing global matters is growing not diminishing.

"From climate change, to sustainable development, to ensuring the effectiveness of international institutions – the views of the United Kingdom and Norway are similar and often identical, as is our determination to act together to meet these challenges. 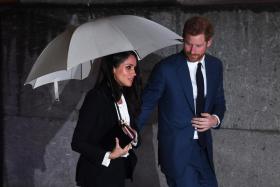 Meghan and Harry mingle with servicemen and women at glitzy awards

"Norwegian oil, gas and renewable energy all keep British kettles boiling – and you can imagine how important that is to a nation of tea-drinkers. I learned earlier today that you power 22 billion cups of tea each year in the UK!"

He said, "Norway has been, and will continue to be, enormously important to Britain both as a friend and a partner."

He signs off in Norwegian saying, "Tusen takk" - a thousands thanks.