LONDON – Japanese car giant Nissan was persuaded to make a major investment in Britain this week by promises that the government would seek continued tariff-free access to EU markets after Brexit, a minister said Sunday. 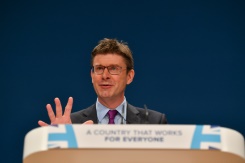 Business Secretary Greg Clark has been under pressure to explain what was offered to Nissan to overcome its concerns about Britain’s future outside the European Union and commit to building two new models at its Sunderland plant.

“What I said was that our objective would be to ensure that we would have continued access to the markets in Europe — and vice versa — without tariffs and without bureaucratic impediments and that is how we will approach those negotiations,” Clark told BBC television.

Prime Minister Theresa May has refused to confirm whether she will seek continued access to Europe’s single market or the customs union in her negotiations with the EU on Brexit, which are due to begin by the end of March.

But her emphasis on ending free movement of people — a key principle of the single market — has led to speculation that Britain will make a clean break with the bloc.

Many businesses fear that in such a case, British exports would be subject to higher World Trade Organization tariffs until new trade agreements were struck.

Clark said he had also confirmed to Nissan the government’s commitment to make funds available for training and skills, to “bring home” elements of the supply chain from overseas, and help keep the British car industry on the cutting edge.

He has previously indicated there was no offer of financial compensation to the firm, and said Sunday: “It is simply not possible to compensate for any future risks, so the intention of keeping the sector competitive was important.”

Nissan announced on Thursday that it would build its new Qashqai sport utility vehicle and its next four-wheel drive X-Trail model in Sunderland in northeast England.

It was a coup for May, who had met Nissan boss Carlos Ghosn for talks at her Downing Street office in October 14. Clark also visited Tokyo earlier this month.

Sunderland is Britain’s biggest car factory and the group’s largest facility in Europe, employing more than 7,000 workers and tens of thousands more through the supply chain.